Money Metals president Stefan Gleason appeared today in a special interview by Tom Bodrovics of Palisades Gold Radio to discuss taxation of precious metals by the IRS, state and federal laws, premiums and minting challenges in the physical bullion market, and much more.

Watch the full interview below.

The biggest scoring factors in the Sound Money Index are whether each state assesses sales or income taxes on gold and silver.

Additional sound money legislation will be considered next year, including in Mississippi, Tennessee, Kentucky, Hawaii, and New Jersey.

The Sound Money Index also documents other state policies. For example, some states place heavy burdens on local precious metals dealers and their customers. In several states, local coin shops are required to collect detailed customer information and submit it to law enforcement with the supposed purpose of helping investigate or prosecute thefts.

Even as they intrude on the privacy of investors and impose financial burdens on dealers, these "customer and dealer harassment" policies are a big waste of time as coins and bullion are fungible and generally not trackable anyway. In more than a dozen states, local dealers are required to photograph items being sold to them by the public, collect copies of customer IDs, take down detailed notes, and upload such information to government databases.

One state (Arizona) even makes it outright illegal to use cash to buy precious metals -- all payments must be electronic and thus traceable.

Also in Arizona, minors are barred from buying gold or silver unless accompanied by a parent tendering an ID card. Taking grandma's birthday gift of cash down to the local coin shop to buy an ounce of silver bears heavy consequences. Any violations of these or other customer/dealer harassment provisions can be prosecuted as a Class 1 misdemeanor, punishable by up to six months in jail plus a fine!

There is only one state, Texas, with a state-chartered depository system. Tennessee is evaluating the idea of doing something similar to Texas. However, the Volunteer State still has sales taxes on bullion, and a recent Tennessee study urges repeal of that draconian tax before any depository framework is seriously considered.

At the federal IRS level, there are recent cases around self-directed IRAs, which usually involve storage at third-party depositories. The government doesn't like the idea of having gold stored at home inside of an IRA. Some investors are now being audited and having to pay penalties for participating in a "home storage" IRA scheme.

President Joe Biden's IRS is hiring tens of thousands of new auditors and that will increase the risk of income-tax audits.  Accordingly, all taxpayers are urged to be especially careful in documenting their deductions and be diligent about following tax laws.

The U.S. Mint has a congressional mandate to keep up with public demand, but the performance of that government "enterprise" has been a particular embarrassment in 2021, leading to high premiums on American Eagles.

The U.S. Mint over the years has failed to build and maintain a surplus inventory of silver blanks and as such continuously violates its legal requirement to supply the market.  Meanwhile, mints like the Sunshine Mint have been unable to keep up with government-mint demand for silver blanks.

All of this combined has led to shortages while pushing up premiums on government silver coins, making privately minted bars and rounds an even better value by comparison. Stefan expects further tightness in the government coin market over the next month or so. 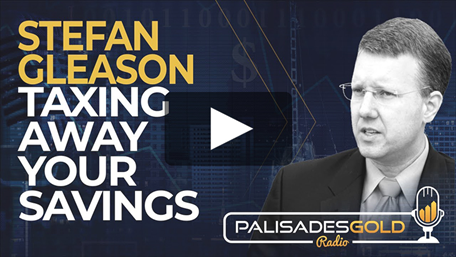