AAPL Could Yet Spoil Permabears' Celebration

The price of silver dropped a dollar, or over 4% on Wednesday. Some voices in the precious metals press want you to think that there is only one conceivable cause. We should coin a term for this form of logical fallacy: argumentum ad ignorantia. This is an argument of the form: “the cause must be XYZ, as I cannot conceive of anything else.”

The Same Old Song and Dance

In this case, XYZ is that the alleged cartel, the bullion banks and/or central banks, sold silver futures in mass quantity. Also, allegedly, inflation-fearing masses are buying physical gold.

So if future were pushed down a dollar, and spot pushed up a penny, then the basis would drop. A lot. How much? Well, yesterday the price of silver was about $22.50. A $1.01 change is around 4.4%. But this is for less than 3 months duration (for the December contract). To annualize it, it is about four times greater i.e. 18%.

If the conspiracy theory were true, the basis would have dropped 18%. Not 18 basis points, 1,800 basis points!

Let’s just say….that didn’t happen. Instead, here’s a graph showing what did happen. 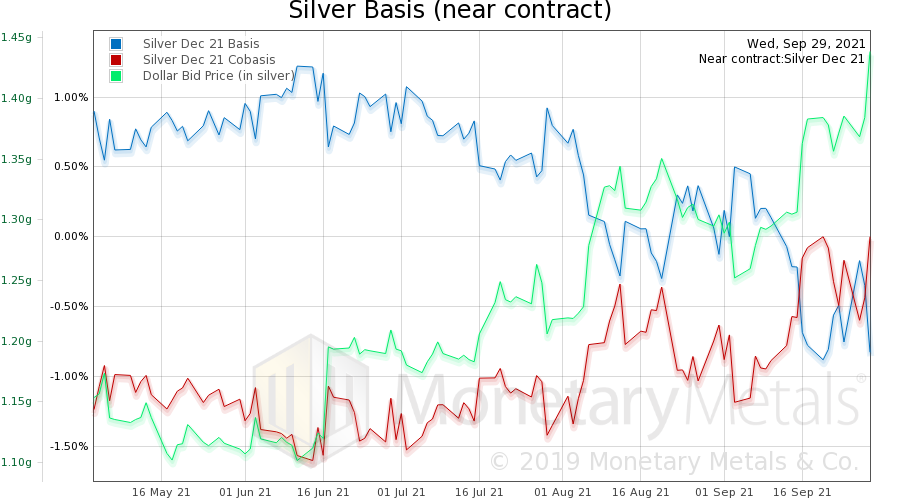 Leave aside claims of selling paper equal to half of the world’s supply of silver in one instant. Just look at the mere fact above. The spread (future – spot) changed by less than three pennies.

This price drop was definitely led by sellers of paper. But people sold physical metal almost as much.

The market maker is not a bettor. He is not speculating on price, much less betting on a falling price. He is carrying silver—buying metal and simultaneously selling futures short. Why? To earn the basis spread, which is usually positive. That is, this is usually a profitable trade.

If he doesn’t care about the price, then what does he care about?

The wider the basis spread gets, the more he jumps into the market. You may observe an increase in the Open Interest (in the Commitment of Traders report). Commentators often get this wrong, painting market makers as short sellers who are profiting from pushing the price down and/or blithely losing money pushing the price down.

The market maker creates more contracts when the profit to carry silver increases. That is, when the basis rises. And when the basis falls, or the cobasis even goes positive, there is an extra profit earned to close the position. That is, to buy the future and sell spot. So Open Interest goes down.

This explanation is prosaic. The mechanics are pretty straightforward, if unfamiliar to many retail traders. Most retail traders are more interested in price than in the seemingly esoteric spread. Our mission in these Reports is to demystify spread (the video is a bit dated but what we said was true then and it’s still true today). It should be no more esoteric than friction in automotive engineering.

By the way, note that our cobasis reading for Wednesday is 0.00%. This means that there were many moments where it was positive. And you can bet that the market makers exploited those moments to close their positions.

To close a silver carry position, you must sell spot and buy future. If spot price is above future, this is profitable—on top of the profit already earned by carrying in the first place. And you take that profit now, without having to wait until delivery month.

The Not So Sexy Truth About Silver

Prosaic explanations are sometimes less popular than fantastical explanations. People once believed that rags in a damp closet spontaneously generated rats, that the Sun and planets revolved around the Earth, and that witches caused infant mortality.

Thankfully, a few heroic men risked their lives to tell the truth (in those days, heretics could be tortured and killed), and most people no longer believe those things. When’s the last time you saw a witch put a hex on a baby?

We are certainly supportive of buying gold and silver (our business is to pay interest on gold and silver for investors to grow their total ounces!) But please, be careful to buy for the right reasons.

The price will rise, but for other reasons such as a relative scarcity of silver to the market. And of course, macroeconomic factors.

Owning the dollar looks crazier and crazier nowadays. At least for those who have savings and a choice of how to hold it (alas, debtors have to hold big cash balances, which is one reason why the dollar does not collapse).

Monetary Metals produces research and fundamental analysis of gold and silver prices that you literally can’t find anywhere else. And it’s all free!