But then, we are not in a normal world.

The Republicans are spending like drunken Modern Monetary Sailors. And there’s some chance that their even-bigger-spending rivals will be in full power after the November election. The deficit is now likely to be $6 trillion. The risk of holding dollars (or its derivatives such as pound, euro, yuan, etc.) is rising. And the return for taking this risk is falling.

Send In the Metals

So it’s logical that people turn to the monetary metals. The price of the dollar is now at a record low: 15.17mg gold. This is mathematically equivalent to saying that the price of gold is $2,050. But economically, it is quite different. We are insisting that the declining credit of the Fed be measured in money, rather than the other way around. Imagine if people went around saying that the meter stick is 47.2 gummy bears long. An hour is 20.0 pop songs in duration. A pound is 2 sacks of feathers heavy.

Anyways, it’s obvious that the dollar is at a record low price in gold terms, because many people realize that the government is abusing its credit, and they simply don’t want to hold its debt paper. However, when priced in the other monetary metal, silver, the dollar is far from its record. It’s currently 1.07g of silver, but in April 2011 it was at 0.63g (i.e. silver was $49.21).

Some speculators are betting that if the dollar can make a record low in gold terms, it could do so in silver terms as well. If gold should be $2,050 then why shouldn’t silver be $52?

That would give us a gold-silver ratio of 41. Which is not an extreme. If the ratio moved to the opposite extreme from its March high—i.e. 31—then at $2,050 gold silver would be $66. In other words, the price would be more than double its current level. Assuming that the price of gold did not budge during such an epic event in silver.

We do not offer this as a prediction. Just food for thought. When markets get to moving, they can keep on moving longer than anyone would expect. And move farther, even when there are no fundamentals to drive the move.

Are the fundamentals of silver waning?  Let’s take a look at the August 6 intraday fundamentals, as shown by the silver basis overlaid on the silver price. 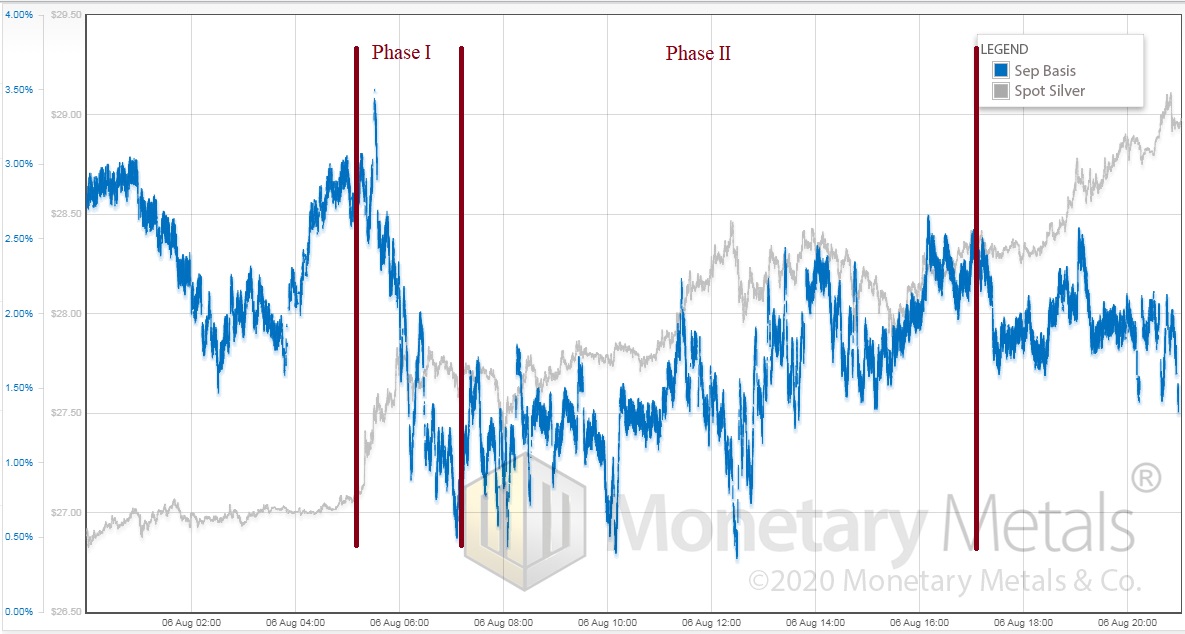 In Phase I, we just have a falling basis while price is rising. That is falling abundance of silver, even though it’s becoming more expensive. This means people were buying metal, not futures.

During Phase II, we see the classic pattern after the peak price in 2011: price moves with basis. The correlation is uncanny, which means that the moves both up and down (with two exceptions when the basis dipped between 9:00 and 10:00, and again at 11:00 through around 12:30.

After that, the price continues to run up, while the basis falls.

The basis is cut in half during the day, starting around 2.8% and ending around 1.4%. That’s a meaningful drop in the abundance of silver to the market. While the price moved up two bucks.

Today, we say it again.

This manic rise in the price of silver will end someday. But to quote our old friend Aragorn from Lord of the Rings, “Today is not that day.”

Now let’s look at gold. Here’s a chart showing basis and price from July 21 through August 6. 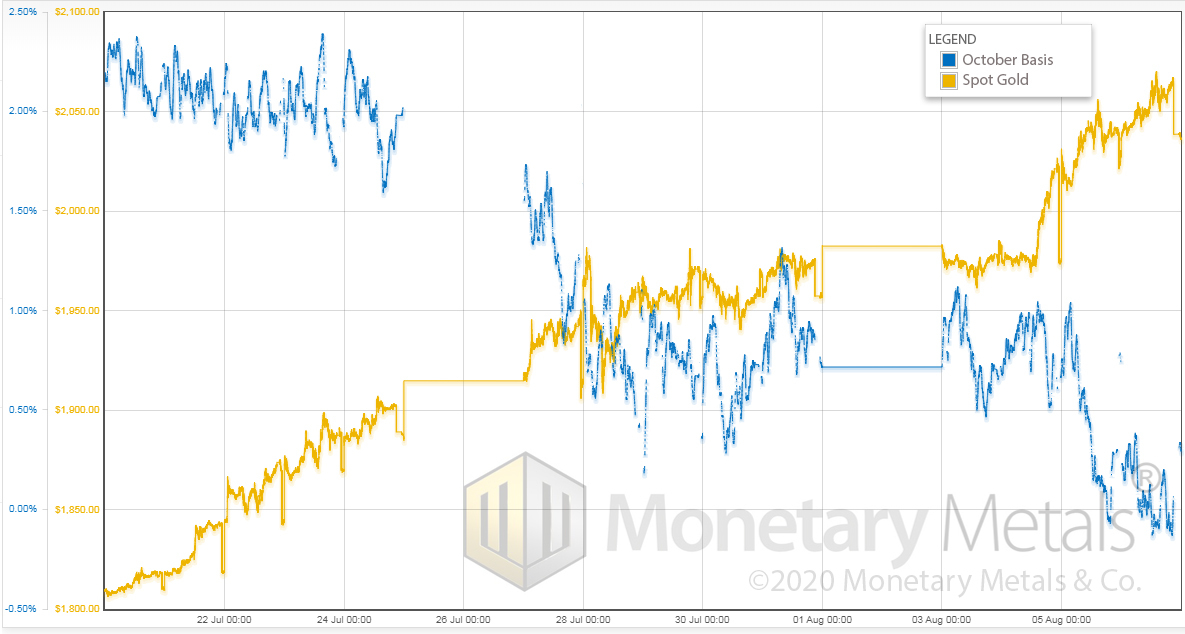 But this is the October basis, so it’s a mite early to be plunging into temporary backwardation just yet in early August.

Gold is getting scarcer, as its price runs up. Backwardation in gold would be a very serious development. We’ll keep an eye on it, and report if it develops.