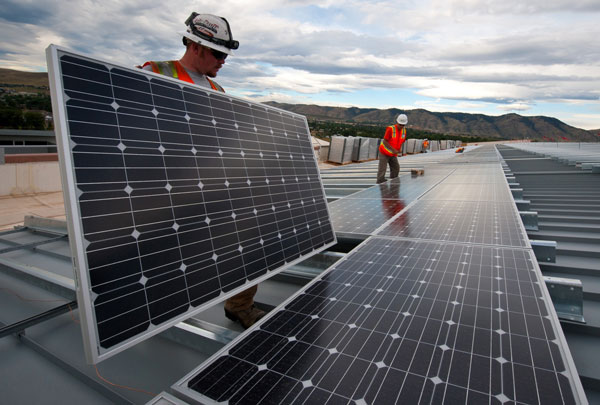 The price of silver soared in May, jumping more than 19 percent on safe haven demand as well as increased expectations of a swift economic recovery, given its many industrial applications. Not only was this silver’s best month since 2011, but it also marked an impressive turnaround for the white metal that just recently plunged to a more-than 10-year low. From March 18 through June 1 of this year, silver soared more than 52 percent, erasing all of its losses due to the coronavirus pandemic.

The question now is whether the rally can continue along with economic improvement, or whether it’s too late to start participating. I believe there’s still a lot of runway left, especially when you consider the growing need for silver in emerging technologies such as 5G wireless networks and photovoltaic (PV) cells, the building block of solar panels.

Silver started June in overbought territory based on the 14-day relative strength index (RSI), but that didn’t seem to deter investors. Global ETFs backed by physical silver have added some 142 million ounces since the metal dipped below $12 an ounce in mid-March. Holdings now stand at an incredible 746 million ounces, the most on record, according to Bloomberg data.

Interestingly, if you look at the chart below, silver ETF holdings appear to have begun tracking the price not of silver, but of gold. 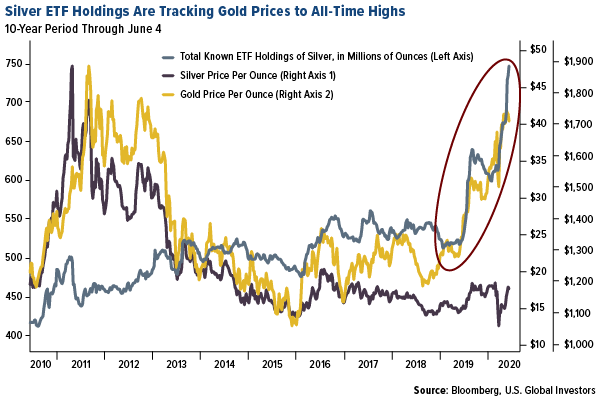 This suggests to me that some investors are using the white metal as a more affordable safe haven and diversifier than gold. But there’s more to the story.

Like copper, nickel, lithium, cobalt and other metals, silver is set to become a major beneficiary of emerging industrial applications.

That includes sources of renewable energy, and solar specifically, which continues to ramp up around the globe in response to a combination of carbon emissions legislation and a rapid decrease in the cost of “green” electricity.

According to a recent report by CRU Consulting, solar power generation will increase to 1,053 terawatt hours (TWh) by 2025, close to double the amount that was generated in 2019. Amazon alone is planning five major solar projects around the world, including its first in China, as the retail giant seeks to reach 80 percent renewable energy by 2024 and 100 percent by 2030. Once completed, these five projects will generate 1.2 million megawatt hours (MWh) of energy every year, or enough to power 113,000 average U.S. homes, according to a press release.

I expect this to be a huge boon to silver, which is used to manufacture the all-important PV cells found in solar panels. Between now and 2030, PV manufacturers are projected to consume a staggering 888 million ounces of silver, according to CRU. To put that in perspective, that’s 51.5 million ounces more than the combined output from global silver mines in 2019.

But there are other technologies on the horizon that will require vast amounts of the white metal.

The global rollout of 5G technology, still in the very early stages, will increase production for goods such as semiconductor chips, cabling, microelectromechanical systems (MEMS), Internet of things (IoT)-enabled devices—all of which require silver. In 2019, the amount of silver used in the applications stood at 7.5 million ounces, or 0.75 percent of annual output. By 2025, that amount could more than double to 16 million ounces and, by 2030, triple to 23 million ounces, according to estimates by Precious Metals Commodity Management.

Silver Miners on a Tear

Obviously there are other ways to get exposure to silver than buying physical bullion and silver-backed ETFs. Those include the silver miners themselves, if you can stomach the extra volatility.

Silver producers had a below-average first quarter compared to gold miners, with production plunging even before COVID-19 led to the closure of mines. This had a negative effect on revenue.

Even so, a number of silver miners have performed very well, especially following the market lows in March. Among our favorites are SilverCrest Metals, up an incredible 105.8 percent over the past 12 months; Pan American Silver, up 142.3 percent; and First Majestic Silver, up 56.18 percent.

The relative strength index (RSI) is a momentum indicator used in technical analysis that measures the magnitude of recent price changes to evaluate overbought or oversold conditions in the price of a stock or other asset.

All opinions expressed and data provided are subject to change without notice. Some of these opinions may not be appropriate to every investor. By clicking the link(s) above, you will be directed to a third-party website(s). U.S. Global Investors does not endorse all information supplied by this/these website(s) and is not responsible for its/their content.

Holdings may change daily. Holdings are reported as of the most recent quarter-end. The following securities mentioned in the article were held by one or more accounts managed by U.S. Global Investors as of 3/31/2020: SilverCrest Metals Inc., Pan American Silver Corp.

Frank Holmes is the CEO and chief investment officer of U.S. Global Investors. Mr. Holmes purchased a controlling interest in U.S. Global Investors in 1989 and became the firm’s chief investment officer in 1999. In 2006, Mr. Holmes was selected mining fund manager of the year by the Mining Journal, and in 2011 he was named a U.S. Metals and Mining "TopGun" by Brendan Wood International. In 2016, Mr. Holmes and portfolio manager Ralph Aldis received the award for Best Americas Based Fund Manager from the Mining Journal. He is also the co-author of The Goldwatcher: Demystifying Gold Investing. More than 30,000 subscribers follow his weekly commentary in the award-winning Investor Alert newsletter which is read in over 180 countries.

Under his guidance, the company’s mutual funds have received recognition from Lipper and Morningstar, two trusted independent financial authorities. In 2015, Mr. Holmes led the company into the exchange-traded fund (ETF) business with the launch of the U.S. Global Jets ETF, which invests in the global airline sector. In 2017, U.S. Global Investors made a strategic investment in HIVE Blockchain Technologies, listed in Toronto, and Mr. Holmes was appointed non-executive Chairman of the Board.

Mr. Holmes was awarded the Huron Medal of Distinction from Huron University College in 2013, his alma mater for the class of 1978. This award recognizes individuals whose life achievements set an example of excellence and reflect Huron’s arts and social sciences missions.

Mr. Holmes is a native of Toronto and is a graduate of the University of Western Ontario with a bachelor’s degree in economics. He is a former president and chairman of the Toronto Society of the Investment Dealers Association.

Mr. Holmes is a much-sought-after keynote speaker at national and international investment conferences. He has spoken at the Investing in African Mining Indaba conference, the Denver Gold Group’s European Gold Forum and numerous Money Show events, sat on panels with prominent industry leaders including the editor of Barron’s and continues to be invited as a keynote speaker at conferences throughout the U.S., Canada and overseas.

Mr. Holmes is a regular commentator on the financial television networks CNBC, Bloomberg, BNN and Fox Business, and has been profiled by Fortune as well as The Financial Times. His thoughts on gold are captured each week on a program called Gold Game Film in collaboration with Kitco News and TheStreet.com. Mr. Holmes was also the feature spread in Barron’s during the commodity rally at the start of 2004. He is a regular contributor to Forbes, Business Insider, Seeking Alpha and Wall Street Journal’s Experts Corner.

Frank Holmes has been appointed non-executive chairman of the Board of Directors of HIVE Blockchain Technologies. Both Mr. Holmes and U.S. Global Investors own shares of HIVE, directly and indirectly. This interview should not be considered a solicitation or offering of any investment product.