Gold and Silver Are Just Getting Started 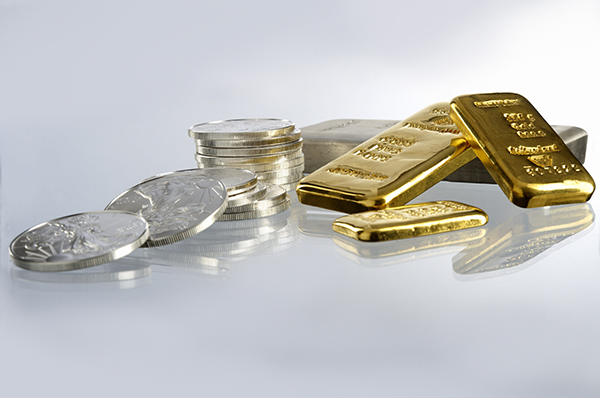 The U.S. Mint made an unusual request last week. In a press release dated July 23, the bureau literally begged Americans to start putting coins back into circulation by spending or depositing them.

As you may have noticed, people just aren’t making transactions with coinage like they used to. That’s especially the case now in the age of the coronavirus. With many people sheltering-in-place, billions of dollars in everyday purchases are being made online that in normal times would have happened at the cash register.

This is creating a national coin shortage.

“Until coin circulation patterns return to normal, it may be more difficult for retailers and small businesses to accept cash payments,” the Mint writes, adding that for millions of Americans, cash is the only form of payment. Without coins, retailers can’t break bills.

This crisis, if it can be called that, got me thinking about the velocity of money. In simple terms, money velocity measures the number of times a unit of currency changes hands in a given period of time. As an illustration, imagine you spend $10 on lunch at a restaurant in a strip mall. That same $10 is then used by the restaurant owner to pay the lease, the landlord then uses it to pay its own creditors, and so on.

Below is the velocity of M2 money supply, which includes not just cash but also so-called “near money”: savings deposits, money market securities and the like. As you can see, it’s at its lowest level ever, using 60 years’ worth of data. 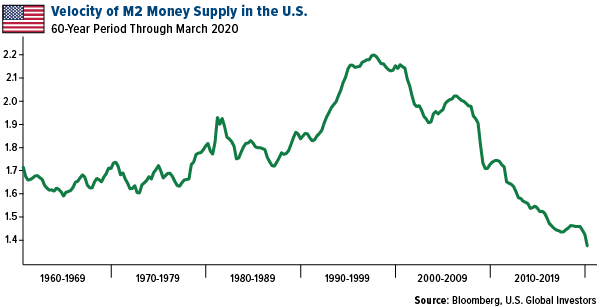 So what does this mean, and can we blame coin hoarders for this decline? Hardly. Instead, we should be directing the blame at the Federal Reserve, which has flooded the economy with easy money.

Never before in its 244-year history has the U.S. economy been so saturated with money. In fact, there’s too much of it. M2 money supply growth is at 24 percent year-over-year, the fastest rate ever.

Obviously the economy isn’t growing that quickly. It’s simply impossible for much of this newly-issued money to be lent out to consumers, and with rates so low, there’s little financial incentive to do so. So it’s just sitting in banks’ excess reserves.

Kind of like how coins are just sitting in people’s couch cushions and mason jars right now instead of being put into circulation.

For many people, this underlines the belief that fiat currency is intrinsically worthless. Because cash is not linked to a hard asset—or, for that matter, anything of value—the central bank is free to print as much of it as it pleases, right out of thin air, regardless of there being a demand for it or not.

And as anyone who’s taken high school economics knows, when supply outpaces demand, the value of any asset plummets.

Instead, Dalio advocates for a highly-diversified portfolio, one that includes gold and other hard assets that we can’t just print more of.

“I believe that it would be both risk-reducing and return-enhancing to consider adding gold to one’s portfolio,” Dalio wrote last July in an article posted on LinkedIn. That same month, he revealed that gold would be among his top investments at Bridgewater.

It was a masterful call. Since he wrote the article, spot gold has climbed 35 percent. On Friday, for the first time since 2011, the precious metal crossed above $1,900 an ounce. And today, it hit a new all-time record high, trading above $1,940 for the first time ever. 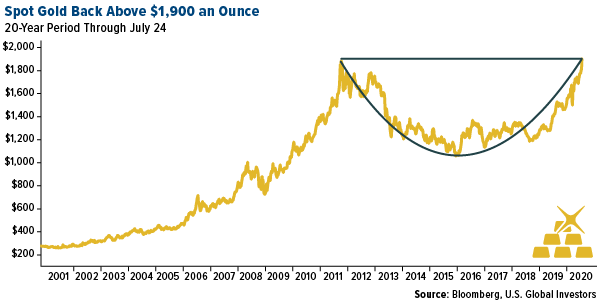 Dalio isn’t the only big-name investor and money manager who’s recently thrown his weight behind gold. Speaking to Bloomberg TV on Friday, emerging markets investor Mark Mobius urged viewers to buy gold now and “continue to buy” as interest rates remain near zero and as COVID-19 continues to impact mine output.

And Jim Reid, research strategist at Deutsche Bank, reportedly described himself as a gold bug recently, adding that he believes “fiat money will be a passing fad in the long-term history of money.”

You may consider Reid’s position extreme, so do with it what you will.

When gold makes moves like this, silver isn’t too far behind. The white metal rose above $23 an ounce on Thursday before trading in the $22.70 range on Friday. Since silver’s 52-week low in mid-March, holdings in silver-backed ETFs have increased by 255 million ounces. Total holdings now stand at a record of just under 860 million ounces, according to Bloomberg data.

We all know that past performance is no guarantee of future results, but you can see in the chart below that the white metal could possibly be setting up for another epic run-up. At this stage of the bull market, silver’s current price appreciation is ahead of any previous rally.

I’m pleased to see the ratio between the gold price and silver price fall further off its recent all-time high. This shows that the white metal is acting more competitively against its more expensive cousin. 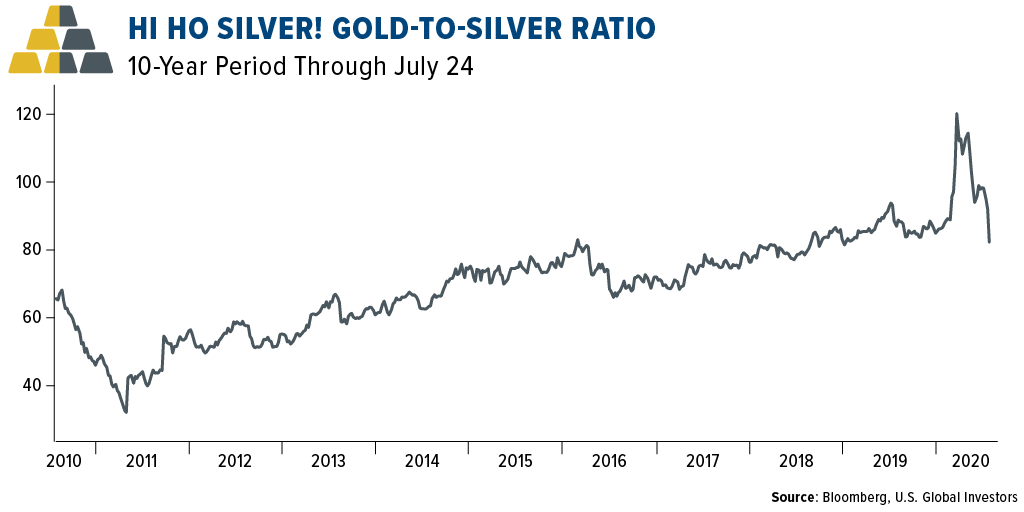 All opinions expressed and data provided are subject to change without notice. Some of these opinions may not be appropriate to every investor. By clicking the link(s) above, you will be directed to a third-party website(s). U.S. Global Investors does not endorse all information supplied by this/these website(s) and is not responsible for its/their content. Beta is a measure of the volatility, or systematic risk, of a security or portfolio in comparison to the market as a whole.

Frank Holmes is the CEO and chief investment officer of U.S. Global Investors. Mr. Holmes purchased a controlling interest in U.S. Global Investors in 1989 and became the firm’s chief investment officer in 1999. In 2006, Mr. Holmes was selected mining fund manager of the year by the Mining Journal, and in 2011 he was named a U.S. Metals and Mining "TopGun" by Brendan Wood International. In 2016, Mr. Holmes and portfolio manager Ralph Aldis received the award for Best Americas Based Fund Manager from the Mining Journal. He is also the co-author of The Goldwatcher: Demystifying Gold Investing. More than 30,000 subscribers follow his weekly commentary in the award-winning Investor Alert newsletter which is read in over 180 countries.

Under his guidance, the company’s mutual funds have received recognition from Lipper and Morningstar, two trusted independent financial authorities. In 2015, Mr. Holmes led the company into the exchange-traded fund (ETF) business with the launch of the U.S. Global Jets ETF, which invests in the global airline sector. In 2017, U.S. Global Investors made a strategic investment in HIVE Blockchain Technologies, listed in Toronto, and Mr. Holmes was appointed non-executive Chairman of the Board.

Mr. Holmes was awarded the Huron Medal of Distinction from Huron University College in 2013, his alma mater for the class of 1978. This award recognizes individuals whose life achievements set an example of excellence and reflect Huron’s arts and social sciences missions.

Mr. Holmes is a native of Toronto and is a graduate of the University of Western Ontario with a bachelor’s degree in economics. He is a former president and chairman of the Toronto Society of the Investment Dealers Association.

Mr. Holmes is a much-sought-after keynote speaker at national and international investment conferences. He has spoken at the Investing in African Mining Indaba conference, the Denver Gold Group’s European Gold Forum and numerous Money Show events, sat on panels with prominent industry leaders including the editor of Barron’s and continues to be invited as a keynote speaker at conferences throughout the U.S., Canada and overseas.

Mr. Holmes is a regular commentator on the financial television networks CNBC, Bloomberg, BNN and Fox Business, and has been profiled by Fortune as well as The Financial Times. His thoughts on gold are captured each week on a program called Gold Game Film in collaboration with Kitco News and TheStreet.com. Mr. Holmes was also the feature spread in Barron’s during the commodity rally at the start of 2004. He is a regular contributor to Forbes, Business Insider, Seeking Alpha and Wall Street Journal’s Experts Corner.

Frank Holmes has been appointed non-executive chairman of the Board of Directors of HIVE Blockchain Technologies. Both Mr. Holmes and U.S. Global Investors own shares of HIVE, directly and indirectly. This interview should not be considered a solicitation or offering of any investment product.