The last few days of trading in silver have been a wild ride.

On Wednesday morning in New York, six hours before the Fed was to announce its interest rate hike, the price of silver began to drop. It went from around $22.65 to a low of $22.25 before recovering about 20 cents.

At 2pm (NY time), the Fed made the announcement. The price had already begun spiking higher for about two minutes.

As an aside, we wonder a bit about how they keep privileged traders from peeking at such announcements before the rest of the world gets to see it. If there was not central planning which ruled our fates with its every edict, this issue would not exist.

Anyways, the price moved up 23 cents by 2:05. It moved sideways waiting for the Fed press conference. Within 11 minutes of the start, the price was spiking up in earnest. It ultimately reached 80 cents higher than the low that occurred four minutes into the live video.

As an aside, imagine a world without such Kremlin Watching.

Anyways, the next day (Thursday), the price was falling, until it hit a brief spike back to around $23.25 then fell fast, hitting a low around 90 cents lower.

Zooming In on The Silver Price Action

Here is the May 4 chart (times are GMT). 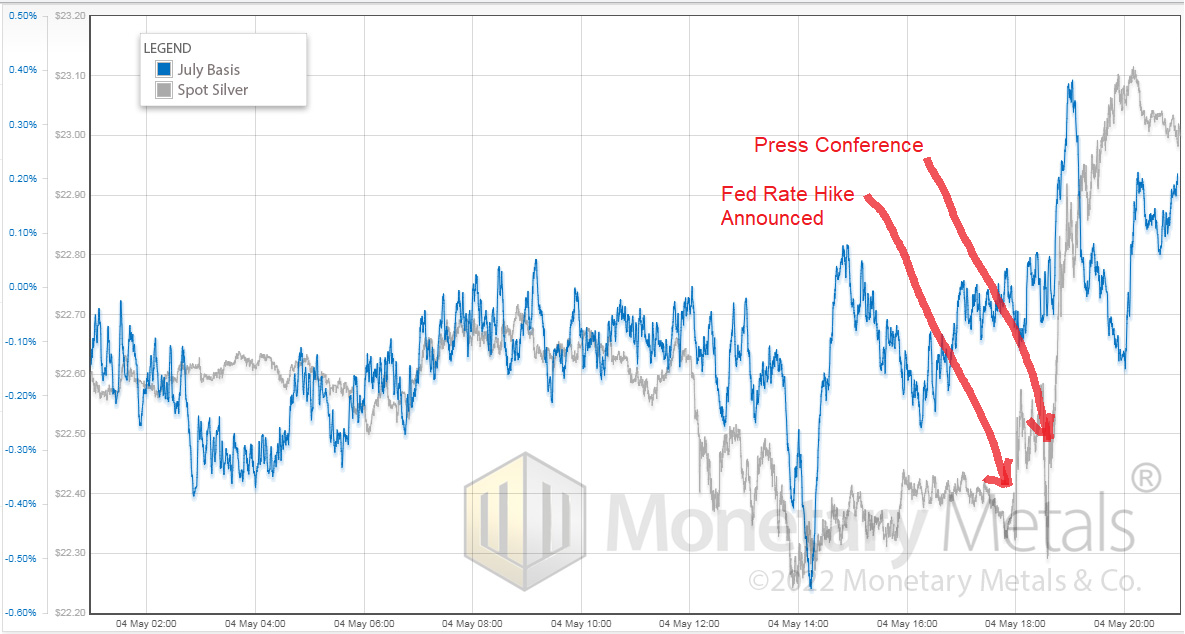 For the most part, the basis tracks the price. This means that we are seeing speculators in the futures market lead traders in the physical metal market.

The obvious exception is just a bit after 14:00 GMT, which is just after 10am in New York. We see quite a move up in the basis, from around -0.55% to 0.5%. This is speculators, whom we assumed bought in such quantity because they anticipated a move higher in price. Correctly, in this case (speculators are often wrong, as our charts show in all its inglorious detail).

After this, the basis falls while the price finishes rising, then subsides, then rises again. So, we have buying of metal, selling of futures, then more metal buying.

Notably when the price spikes during the press release, we see another spike in the basis. Those pesky speculators are trying to front-run what they expect the metals buyers to do (as is often the case). The basis then falls a bunch, while the price keeps rising—so the speculators were right again.

The day ends with the price 40 cents higher than it began. And with the basis about 30bps higher.

The Effect of Speculators on the Precious Metals Markets

This is very typical of how the precious metals markets trade. Price is set at the margin, and since speculators can play with big leverage, they can be a fat margin. At least for a while. They pay close attention to Fed announcements and other news, they often have a real-time quote screen, and they can hit the buy or sell buttons quickly. Unlike stackers, who have a longer time horizon, care less about what the Fed does month to month, and are more concerned about accumulating savings, instead of speculating to make a quick buck. 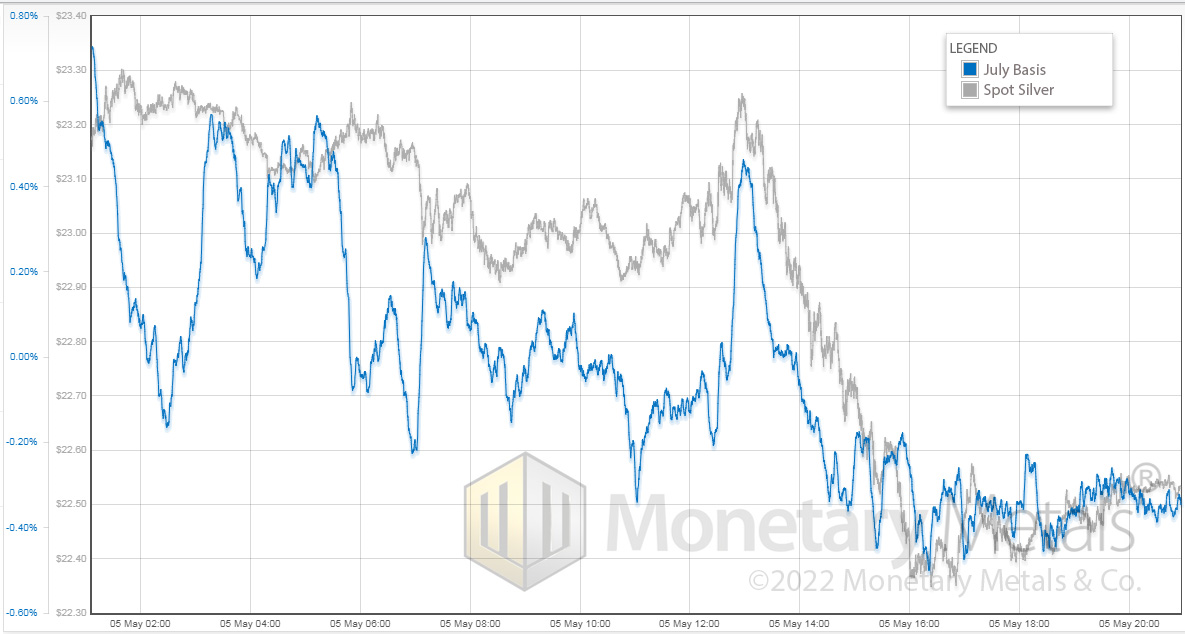 We see several big drops in basis. When they occur with a slightly falling price, this is speculators selling—and metal buyers mostly taking up the slack. The result is the price does not fall much—but the basis drops.

After 7am GMT, i.e. 8am BST (presumably traders in Europe are online by then), the basis moves with the price, so back to the typical trading pattern.

What Does It All Mean?

There are three morals to this story.

One, these announcements often have little to no durable effect on the gold and silver markets. The price may jump all over the place, but the move can be reversed in as little as a few hours to a few days.

Two, silver ended up a bit less abundant to the market than where it began. It seems those who bought physical metal during this episode did not unload as quickly as the speculators did. The speculators were quick to buy, and quick to sell.

Three, the July basis is negative. This is well ahead of the contract roll, when speculators must sell the July contract, and they can buy September if they wish to remain long silver. Selling the future pushes down its basis. A negative basis is an indication of tightness in the silver market. Those interested in acting on this indicator may want to read our previous article – Time for a Silver Trade?