Zinc One Resources Inc. (Z:TSX.V; ZZZOF:OTC; RH33:FSE) is one of the best zinc companies around, but over the past six months its stock has suffered a heavy reaction following a steep run-up early in the year, as we can see on its 8-month chart below. Fundamentally this reaction was due to two factors. One was a falling zinc price, and the other was a major funding by the company. 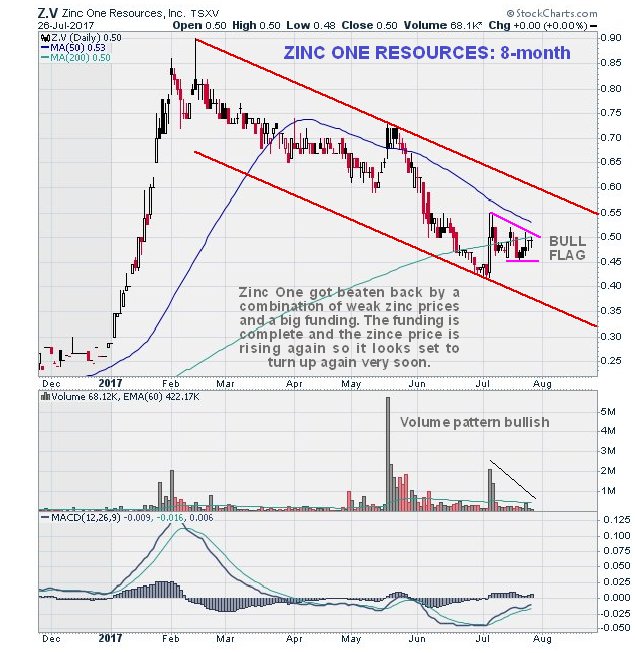 The good news is that these two negative factors no longer exist. The funding is in the rear view mirror, and it can safely be assumed that there won’t be another for quite a while. In addition the zinc price is now recovering well, as can be seen on the zinc price chart shown below. These two negative influences having disappeared means that the stock is free to advance again, especially as its heavy reaction fully corrected its earlier overbought condition. But there's more—a major bull market in metals is about to get underway as signaled by the copper price, which is now advancing strongly. Copper is a good lead indicator which is why it got the moniker "Dr Copper." In addition, zinc is set to be one of the most important industrial metals going forward.

Looking now more closely at the chart for Zinc One, we see that the corrective downtrend in force for 5 months from February has brought it down to a much more attractive price, especially given the now strongly bullish outlook for both base and precious metals. The recent volume pattern has been bullish, with strong upside volume on rallies and declining downside volume. Thus it is interesting to observe the current confluence of the price and its moving averages, with the 200-day still rising, which is a potent setup for a reversal, and it looks like it is reversing with the appearance of a tight bull Flag on the chart in recent weeks on generally declining volume. This Flag looks to be about complete and the next development is likely to be a sharp breakout above the still falling 50-day moving average, which is closing on the price and set to turn up should this happen.

The conclusion is that Zinc One is at a good price here and is an immediate strong buy for a resumption of its bull market soon with a major upleg which should take it comfortably to new highs. Zinc One trades in good volumes on the U.S. OTC market.

Clive Maund has been president of www.clivemaund.com, a successful resource sector website, since its inception in 2003. He has 30 years' experience in technical analysis and has worked for banks, commodity brokers and stockbrokers in the City of London. He holds a Diploma in Technical Analysis from the UK Society of Technical Analysts.