While the silver price was dropping recently, we published analyses here and here.

At that time, we saw a basis that fell with price, but which recovered during “off” days. In short, there was not much of a decrease in abundance of the metal to the markets commensurate with the price drops.

Let’s look at the intraday price and basis action. 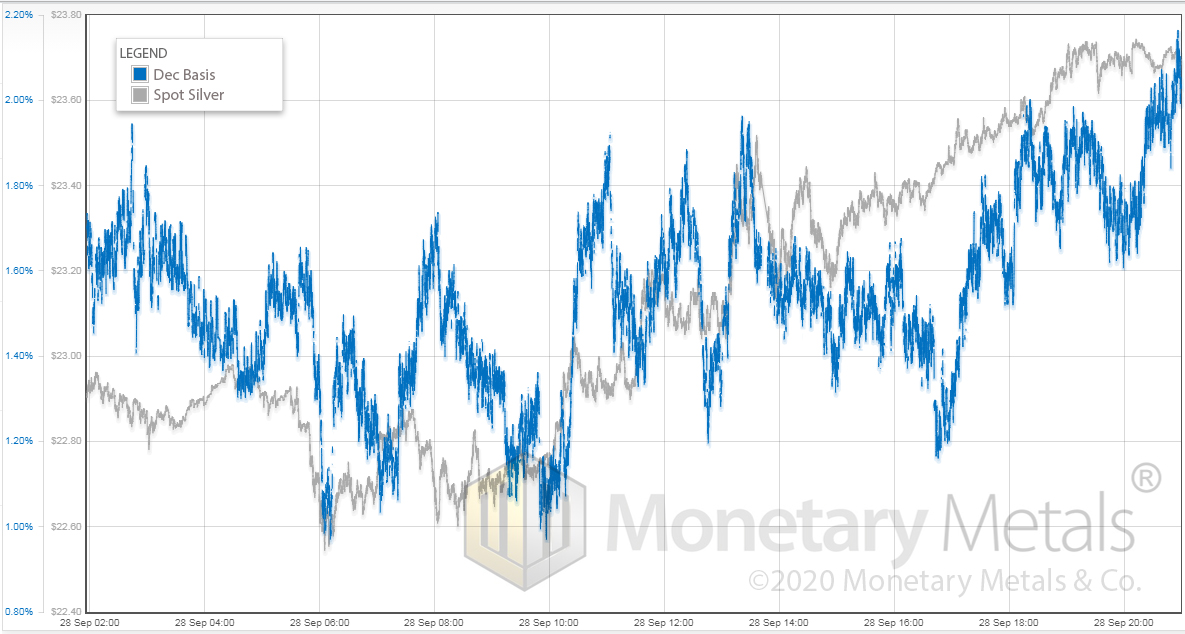 There are several trends.

At the end of the day, the price is up almost a buck and the basis is up from 1.6% to 2%. This day, futures buyers pushed up the price. But they did not do all the heavy lifting - they had some help from metal buyers.

One can hardly read the alternative financial press or gold sites without coming across articles that claim gold and silver manipulation is proven. It’s allegedly no longer just a conspiracy. Because, now we know that, well, ummm, something…

So let’s look at what we know.

We know that JP Morgan is going to pay a hefty fine to government regulators.

So what did JP Morgan do?

According to Zero Hedge, “…all the ‘tinfoil’ conspiracy theories involving the JPMorgan commodity trading desk have been confirmed…”

That would be incredible, as these tinfoil hats have said that the banks have been suppressing the gold price for decades, by thousands of dollars. This is supposedly done either not-for-profit in service to the Federal Reserve, or alternatively to make money.

The tinfoil hats also accuse the banks of selling short gold and silver futures, naked (we have debunked this one, and we have the data to prove it).

Naturally, the tinfoil hats also include a series of massive frauds on bank audited financial statements. Being short gold and silver, JP Morgan would be losing mass quantities of dollars, so it would have to lie. Teams of accountants, and internal and external auditors would have to be in on the game.

None of the above was confirmed by the ruling today. It confirmed that traders committed a different criminal act. They pled guilty to something else entirely.

Spoofing is defined as sending orders to a market, that one does not intend to be filled.

The purpose is to get one of them to buy your contract at your offer price of $23.50. Then you cancel the bid orders.

There is, of course, a risk that sellers could take your bids at any time. If your goal was to sell silver at $23.50, then you’re probably not happy that you just bought more at $23.45.

We will not address the question whether spoofing should be a crime. We just note that a market maker must, by the nature of market making, send both bids and offers in rapid flurries and then withdraw them.

For example, if you are arbitraging spot and futures, then every time the bid or offer changes in the spot market or in the LIBOR market, you must change your bid and offer in the futures market.

And if you are also making a market in SLV and other ETFs, then it becomes more complex. Add in various physical products at various locations around the world, plus a few more exchanges like the SGE, and the complexity (and rapidity of making and pulling bids and offers on these myriad of markets) grows exponentially.

Telling the difference between a “legitimate” market maker and an “illegitimate” spoofer may seem simple in concept. But in actual practice, it is wickedly hard.

The market makers have been misunderstood—and resented—at least as far back as shares of the East India Company traded in a London coffee house in the 17th century.

What Did JP Morgan Do?

Anyways, spoofing is what the former JP Morgan trader said he did. The criminal charges sound like he took money from widows and orphans, embezzled client funds, and ran a Ponzi scheme:

Most importantly to gold and silver traders, does this prove that the price of gold would be $10,000 and silver would be $300 but for manipulation? And this is the smoking gun?

It’s the fallacy known as Motte and Bailey. A logical fallacy is an argument that is not what it seems, and fails to prove its point. For example:

The Motte and Bailey Fallacy is a type of bait and switch. It is named for a medieval keep design, with an inner and highly defensible motte and an outer hard-to-defend bailey. People wanted to be in the bailey, not confined to the motte.

The Fallacy in Action Here

In arguments, the bailey is the provocative statement.

In this case, “gold ought to be $10,000 but trades at a mere $1,900 due to a long-term conspiracy to suppress its price.” This proposition is indefensible. Indeed, it has been debunked. Not to mention it beggars belief that thousands of people, over a period of decades, could keep such a big secret. And multibillion dollar fraud on major banks’ balance sheets that was hidden for decades? Preposterous. That’s not how the system works.

The motte is where the arguer retreats, when pressed.

In this case, “Look, a JP Morgan trader pled guilty to spoofing!” Even if it’s true that this trader entered spoof orders, that does not prove the grand suppression conspiracy theory. The way catching a kid stealing penny candy at the corner store doesn’t prove that his dad committed murder.

We will leave you with three thoughts.