Record earnings continue to roll in, though they are having no impact on the stock price of mining companies as gold got absolutely hammered on Friday, with silver falling as well. Nominal 10yr rates marched higher, though they are still exceptionally low, and real rates remain negative. The $1.9T stimulus bill could pass as early as this weekend, if not in the near future.

Alamos started construction at the la Yaqui Grande project at Mulatos in Mexico, which will allow the company to maintain production but at lower-costs. During Q4, Alamos acquired Trillium Mining for $19.5m, increasing the land package adjacent to and along strike from Island Gold by 60%. Alamos remains well-financed with cash and equivalents of $220.5m and equity investments of $43m. The repaid the $100m drawn on its credit facility earlier in the year in Q4. Production is expected to increase approx. 155 to 470-510k oz. Au in 2021 @ AISC of $1,025-$1,075/oz. Moving forward, AISC will fall at La Yaqui Grande cones-online and a few years later following the Island Gold Phase III expansion. Argonaut's flagship asset is the Magino development project (construction has commenced), near Island Gold, and has many similarities. Alamos Gold acquiring Argonaut would make a lot of sense, but we will have to wait and see. 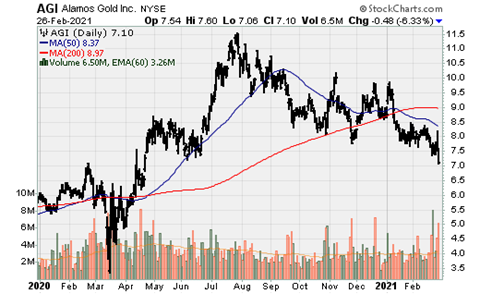 B2Gold has a strong balance sheet with $480m in cash and equivalents and no debt. In Q3 2020, the company repaid the $425m balance outstanding in the revolving credit facility. The full $600m is undrawn and available. B2Gold continues to advance the Gramolite project, proceed with underground development at Otjikoto, and determining the optimum throughput rate at Fekola (which looks to be higher than the current 7.5mtpa nameplate). It would make a lot of sense to use some cash, debt, and equity to make an acquisition or refill its development pipeline.

Calibre Mining: The company produced 136k oz. Au in 2020 despite more than two months of shutting down operations. Limon contributed 64.5k oz. Au and Libertad contributed 71.45k oz. AISC in Q4 and the full-year totaled $1,051/oz. and $1,043/oz. Calibre generated operating cash flow of $28.7m in Q4 and $81.26m for the full-year. 2020 was an exciting year for the company despite the voluntary shutdown of mining operations. It advanced Pavon development with initial mill feed delivered to Libertad in January and acquired the remaining 70% interest in the Eastern Borosi Project and completed 80k meter infill, resource expansion, and discovery drilling program. 2021 production and costs are projected to be 170-180k oz. Au @ AISC of $1,040-$1,140/oz. Costs are expected to be higher in the first half of 2021 and lower in the back half of the year. The company will focus on maintaining and increasing production as it plans to invest $35-40m in expansionary capital and $14-$17m on exploration.

The company increased gold reserves at Kumtor by 107% to 6.3. oz. (July 2020) and published a new technical report outlining a new 11yr mine life with average annual production of 590k oz. for five years beginning in 2022 @ AISC of $828/oz. Progress was made at Mt. Milligan as it achieved record throughput. 2021 guidance is for 740-820k oz. Au, 70-80m lbs. Cu @ AISC of $850-$950/oz. Costs will be elevated due to processing lower-grade ore at Kumtor, and higher capitalized stripping at both Kumtor and Mt. Milligan. Centerra is well capitalized with $545m in cash and no debt. Given the lack of any substantive development project in its pipeline (Kemess is relatively small), an acquisition could be coming later in 2021.

There have been several positive developments for the longer-term future of the company thus far in 2021. In February 2021, Eldorado entered into an Amended Investment Agreement with the Hellenic Republic, providing a mutually beneficial and modernized legal and financial framework to allow for investment in the Skouries project and the Olympias and Stratoni mines. There remains significant value to be unlocked through its Greek assets. The focus in 2021 will be on advancing Skouries.

In January, the company announced the acquisition of QMX Gold for $104m. This significantly expands the land position adjacent to its Lamaque operations, which have been a pleasant surprise and is an important asset for the foreseeable future. El-Dorado also announced a maiden MRE at Ormaque, which highlights the exploration success and future growth at Lamaque. The MRE contains 803k oz. Au (Inferred) @ 9.50 g/t. Ormaque could become a second underground mine to feed the Sigma mill. The Sigma mill is expandable, and, in a few years, Lamaque could produce an average upwards of 250-300k oz. Au or higher at low-costs. Development at Ormaque could be fast-tracked as more than 60% of the resource is in the upper part of the deposit (<400m from surface). El-Dorado brought Lamque into production very quickly, and there remains ample excess capacity at the Sigma mill.  Exploration in 2021 is focused on infill and expansion drilling as the deposit is open in multiple directions.

Endeavour Mining: Following the close of the Teranga acquisition and the divestment of Agbaou, Endeavour revises its 2021 production and cost guidance. Production guidance has been revised 50% upward to 1.4-1.5m oz. Au (100% basis) @ AISC of $840-$890/oz., a $40/oz. decrease. Endeavour also increased its exploration budget by 40% to $70-$90m with a strong focus on the recently acquired Sabodala-Massawa (SM) project. The Phase I expansion of SM is expected to be completed by year-end, and the FS for the Phase II expansion. The Phase I expansion is expected to increase production by 90k oz. p.a., and following Phase II, production is expected to average 400k+ oz. p.a. at low costs.

Endeavour is set to have a very exciting year through significant production growth and likely market re-rates. Ideally, the company will look to offload Karma, which has a short-mine life based on reserves with high AISC, so average AISC/oz. would fall. Endeavour recently reported the results of a PFS at Fetekro and FS at Kalana. Fetekro is very exciting as the company took this from discovery to PFS very quickly, and it already has a robust production profile.

. These assets will far more than replace lost production at Agbaou and Karma at much lower costs. Highlights from the Fetekro PFS:

Highlights from the Kalana PFS: 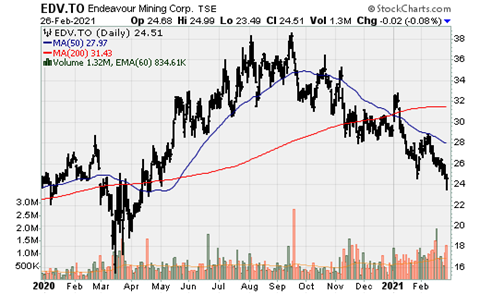 2020 was an exciting year for the company. It laid the groundwork for significant near, medium, and long-term growth. Most notably, Agnico and Yamana gold made a positive construction decision on the Canadian Malartic underground, which increased the life of the asset through at least 2039. In all likelihood, it will be considerably longer when all is said and done. Osisko Gold Royalties also completed the spin-off of Osisko Development, which provides near, medium, and longer-term production through a 5% NSR on Bonanza Ledge (2021_, a 15% precious metal stream on San Antonio (2021/2022), and a 5% on the large Cariboo mine (2023/24). The spin-off also gives Osisko a significant equity position in Osisko Development. There were also positive developments at several projects, such as an increased resource with high-grades at Windfall (2-3% NSR + 14.50% equity interest), Increased reserves at Island Gold, much of which is on the 3% NSR ground. El-Dorado delivered a relatively large maiden MRE at Ormaque (800k oz. @ 9.5 g/t), which should significantly increase mill feed to the Sigma mill (2.8ktpd excess capacity) in the medium-term.

Torex Gold: Reported record 2020 financial results. Torex sold 437k oz. Au in 2020 @ AISC of $924/oz., generating operating cash flow of $342m. The company has a net cash position of $162m, a $183m increase over year-end 2019. Torex continues to advance Media Luna, with production slated for early 2024. This should create a nice transition as the ELG pits are expected to be depleted by 2025. Torex plans further development at the ELG underground and will invest in exploration to find its next mine within the prospective Morelos land package in the Guerrero Gold Belt (GGB). 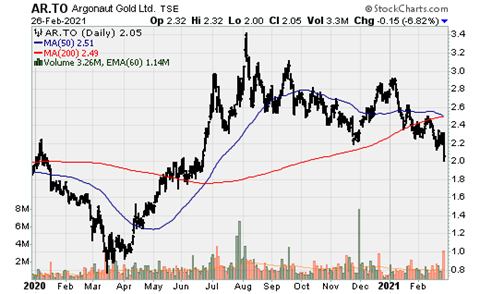