[Note: This was not written by a financial professional, and is not intended as financial advice]

What This Is All About

This is a movement to help level the playing field between everyday people and the billionaires who control the big financial institutions that control the money, and thus control us. It’s a movement to wake people up to what’s been happening, and to help us, together, start to reclaim the power we’ve unwittingly allowed others to have over our lives.

Big banks have made big fortunes by manipulating the silver market for decades. Although many have tried, and some have come close, no one has been strong enough to completely break their stranglehold. Until now.

Reddit’s Wall Street Bets community -- and its truly representative, democratically elevated, and dynamically evolving group of leaders -- has set a shining example that other movements can follow. They showed that, working together by choice, a dedicated army of everyday people can leverage their collective skills and resources to achieve what had previously seemed impossible – to alter deeply entrenched power dynamics and level the playing field. They found their voice, a sense of belonging, and a path to asserting power they didn’t even realize had been theirs all along.

Now, in that movement’s footsteps, comes this new, emboldened, global movement, which has an even more ambitious target in its sights. It’s no longer just about the stocks of a handful of American companies, and a few overleveraged hedge funds. This is a movement to change how the whole system operates. It is paving the way for the total transformation of what is now a centralized monetary and financial system, which also centralizes wealth. It’s a system that doesn’t work for you, but against you, if you aren’t in its inner core (as George Carlin once put it, “It’s a big club, and you ain’t in it”). The transformation can stop the intentional depreciation of your hard-earned money, and create space for much fairer and more socially beneficial financial models – such as community banks and credit unions – to come to the fore.

The silver market is the Achilles heel of the old system, and its time has come.

Silver is the Achilles heel because big financial institutions have been manipulating this sector like no other. Why? Because they can. The bullion banks can short silver futures, which only exist on paper, and smash the “official” price of silver. They’ve been caught doing this again and again, and they’ve effectively just been slapped on the wrist with fines that are little more than drops in the bucket for them, compared to what can be gained by the manipulation. We all know by now that those who help make the rules find ways to make rules to their advantage, and to rise above the other rules. Interestingly, if the dollar price of silver were allowed to be set by supply and demand, the true rate of inflation – which is another way of saying the true rate of devaluation of your dollars over the years – would be much clearer. Who benefits from this devaluation of your dollars? Hint: not you.

It’s helpful here to understand that there are different types of money. Our dollar bills are fiat money. (As explained by Investopedia: “The value of fiat money is not determined by the material with which it is made. … Rather, the value of the money is determined by the government.”) Each unit of fiat money can be devalued, when more and more fiat money is put into circulation. All else being equal, you will then need more and more and more of this fiat money to buy the same amount of goods and services. This devaluation phenomenon is, of course, popularly referred to as inflation (yes, prices are increasing or inflating, but that’s really because the value of each dollar is deflating, or being devalued).

Devaluation/inflation is not inevitable; it’s a feature of the system, not a bug. If the price of goods and services goes up over time, that’s fine for those who already own a lot of things – houses, stocks, artwork, precious metals, etc. – that also go up in price. It’s especially fine for those who are positioned closest to where inflation begins to be felt. They can sell possessions when they need to, and exchange one (very) inflated good for another. It’s not so fine for those who don’t own many price-appreciating assets and rely on wages that haven’t risen at the pace of real inflation (the kind reflected in checkbooks, rather than in “official” statistics).

On top of all this, for practical reasons, you’re pretty much forced to keep your devaluing fiat money in a bank, where its value can be further eroded by bail-ins and negative interest rates.

In contrast to fiat money, money in the form of precious metals (gold, as well as silver) can’t be devalued so handily, and it can be maintained outside the banking system. It’s part of the culture in many countries to store some amount of family wealth in the form of precious metals that they then sell as needed to pay for big expenses. Depending on your situation, you can decide for yourself if that might be something that would also benefit you and your family.

The bullion banks’ ability to short is not unlimited. All it will take to stop the manipulation in its tracks, and make the value of silver reflect its true worth (which is arguably much higher, based on both fundamentals and technical analyses that others have explained in detail) is for them to not be able to find enough physical silver to buy to be able to fulfill the orders of futures traders who request physical delivery of their contracts. This almost happened in spring 2020, due to supply issues related to the coronavirus. Now there’s an army of individuals poised to take this on, on the demand side of the equation.

Why is #silversqueeze happening now? In short, it’s happening now because we are confident we can win. Timing and momentum are everything. We’ve got the momentum from Wall Street Bets’ success; awareness has been building (#silversqueeze has been trending on social media, articles have appeared even in many mainstream media, etc.); public sentiment is on our side; and the movement is clearly gaining traction, as evidenced by the fact that many dealers around the world are already running out of silver products just a few days into this. In-person coin dealers are also reporting much more traffic than usual, with many first-time younger customers. This is not an overnight story; it may take many months to unfold. But there’s also the timing on the macro side. As some people routinely point out, "all (fiat/paper) currencies eventually go to zero,” and the U.S. (among other countries) has been “printing money” as recklessly as a drunken sailor.

As Victor Hugo once said, “Nothing is more powerful than an idea whose time has come.”

Everyone can be part of this global movement. If you have access to fiat money (dollars, euros, or other local currency) that you can spare, you can invest it in silver (see below). If you can’t afford to buy any silver right now, you can tell better-resourced friends and family; those that listen to you can thank you later. We all have a role to play. Acting individually but together, we can make history.

How You Can Participate

Acquiring physical metal is the primary way to achieve an impact, but more indirect efforts can also advance the cause. People who are interested in purchasing physical silver can buy it from online bullion dealers or local coin stores (bars as well as coins issued by well-known mints tend to be the most popular choices, but there are plenty of other options too; this guide answers a lot of common questions posed by people who are new to this world). Silver financial products – some of which are backed by physical silver on the issuers’ end -- can be purchased through brokers such as E-Trade and Fidelity, as can the stocks of silver mining companies. (Some specific ideas are discussed here.)

People who wield power over others don’t tend to give it up easily, as we have seen in the Wall Street Bets GameStop situation. Expect more of the same pushback – a lot more, because the stakes are higher – as this progresses. But often, when there’s a will, there’s a way, especially when you can leverage the collective smarts of so many people who believe in a cause and want it to succeed.

Ultimately, what you do with all this information is up to you. But bear in mind that silver has traditionally been known as the people’s money, because it’s much more accessible to everyday people than gold. Control your money, and it’s a big step toward controlling your life. This is an independence movement. The future – our future -- is in our hands.

[Note: This was not written by a financial professional, and is not intended as financial advice. The author is not accountable for the veracity of this information, or for any actions taken based on this write-up. Everyone is responsible for doing their own due diligence and making their own decisions, to fit their unique circumstances.] 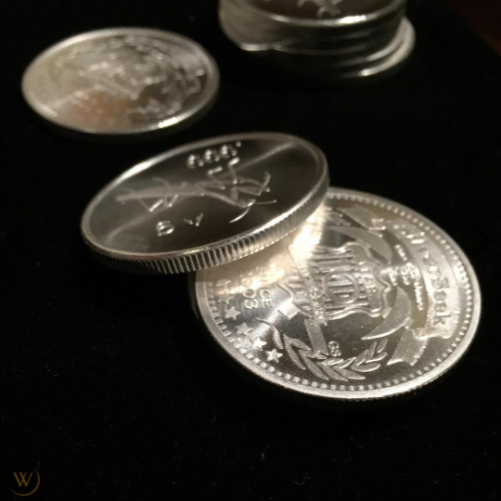 GV is not a professional trader.

I am just practicing patience with a good sense of when NOT to trade
In the last 11 years, I traded the silver bull market of 2009-2011 (long and short) for 2 years.
Made thousands %

Once the parabola bursted, I did nothing after

To trade the biggest Silver bull market of all time

Look
If you had
One shot
Or one opportunity
To seize everything you ever wanted
In one moment
Would you capture it
Or just let it slip?

that's why i am personally in this #silver trade

Do your own diligence - nothing on this website is financial advice.