February 25, 2021 Silver Is Close To Something Big
December 16, 2020 Silver Is Still Following Bitcoin Higher
September 10, 2020 Get The Big Prize for Silver
August 25, 2020 End of Fiat: It is Evident in the Silver, Gold and Crypto Charts
August 04, 2020 This Inflation-Adjusted Silver Chart Tells An Interesting Story

What The 1987 Crash Reveals About Silver Today

The 1987 stock market crash occurred after a period with a similar build up to the 2020 crash. After being stuck in a range for a number of years in the 1970s and the 2000s, the Dow managed to break higher after a significant gold peak in 1980 as well as 2011 respectively. See the chart below: 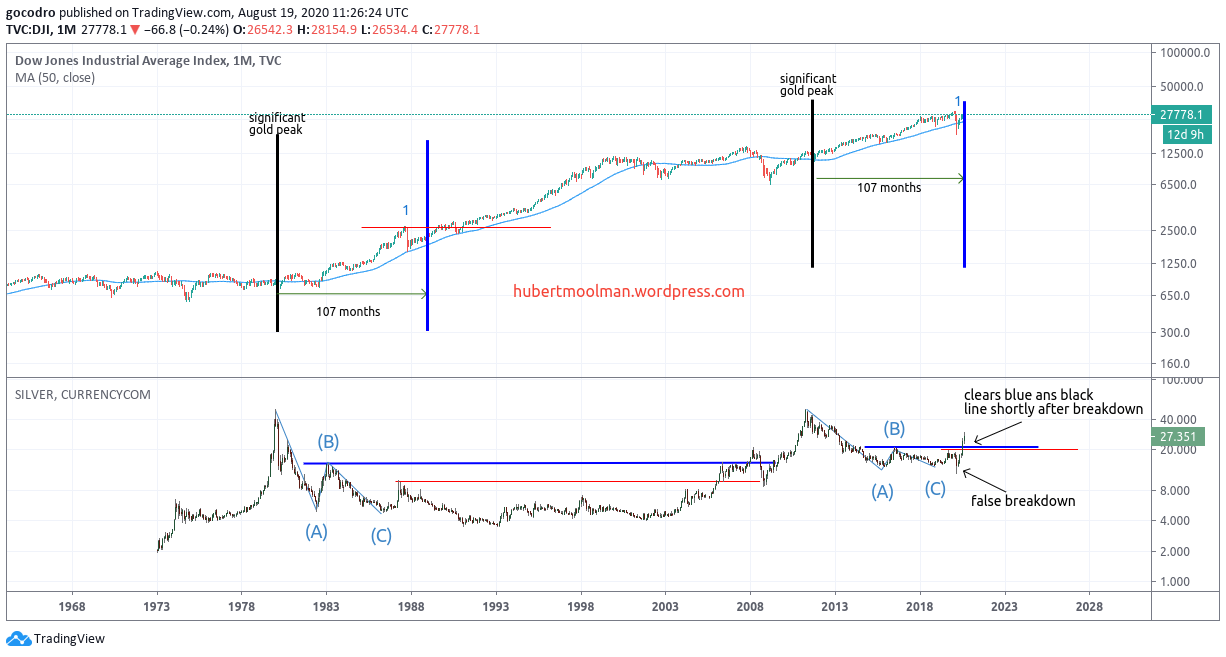 In both cases, prices more than doubled over a period of at least 90 months from the level it was at the gold peak. Point 1 on the chart (for 1987 and 2020) marks the top of the rallies.

When the Dow reached the top (point 1) in August 1987, silver was already in decline. It was in it’s third wave down since its peak in 1980. That third wave down started at the peak after point C (from where it touched the red line).

In a similar manner, silver was already in decline when the Dow reached its peak in February 2020. Silver’s third wave down started at the peak after point C (from where it touched the red line).

It is a signal that silver will likely continue much higher in a multi-year bull market as suppose to a multi-year bear market (which was the case in the 80s and 90s). This is especially true since it has also cleared the high at the blue line as well.

Together with the recent new all-time high for gold, it is also a signal that you will have to wait long for  a new bull market for the Dow. This is how gold and silver make up for the under performance, relative to the Dow, that is created as a result of central bank credit extension (as previously discussed).

After all, not all assets are equally affected during massive credit extension, in a debt-based monetary system. While the stock market had its time to shine over the last decade, it is now time for silver to outperform.

Here is one way of looking at it (note that the breakout is already successful):