AbraPlata Resources is a silver, gold, and copper exploration company with projects in both Argentina and Chile. Its principal asset is the Diablillos Ag-Au project in Argentina. It has a relatively large resource base and an initial open-pit PEA was completed in 2018. There still remains exploration upside as very little deep drilling has been undertaken and the deposit remains open along strike.

Ownership of the company is strong with Altius Minerals, SSR Mining, and Eric Sprott (On July 9th, invested $3m) owning 35% of the outstanding shares and insiders owning 3%. The company does have a relatively sloppy share structure but this isn’t uncommon for juniors given the duration and severity of the last bear market. The company currently has issued 318m shares but 509m shares on a fully diluted basis.

While advancing and building projects in Argentina, it has become increasingly uncertain over the past couple of years due to the ability to repatriate profits. Its flagship, Diablillos is in the Salta province and ranked #4 overall for investment attractiveness in Latin American. This ranks ahead of both Mexico (6th) and Brazil (9th) per the 2019 Fraser Institute Mining Survey.

AbraPlata’s portfolio of asset are located in 3 of the top 4 most attractive jurisdictions in Latin America, again the Fraser Institute. This includes its Arcas project in Chile (1st), its La Coipita project in San Juan Argentina (2nd) and of course Diablillos.

Diablillos: Per the 2018 PEA, the project would be a 6ktpd operation producing 9.8m AgEq oz., generating and after-tax NPV7.50% and IRR of $212m and 30.20% using a silver and gold price deck of $20/oz. and $1,300/oz. But at today’s metal prices, the NPV would be significantly higher despite a slightly lower silver prices as the gold price has risen substantially.

The project was acquired from SSR Mining, which holds a healthy stake in the company. The company was able to defer the property payment of $5m to 2023 and $7m to 2025 to SSR in exchange for 24m shares. The capital investment required to bring this project into production is $293m, which is too large for AbraPlata to do on its own. It will likely either have to enter into a JV agreement, or sell it outright, though things could change depending on how high precious metal prices rise.

The project is an epithermal Ag-Au deposit with Cu-Au Porphyry Intrusive. The Diablillos property has multiple epithermal and porphyry targets, with the Oculto Zone currently containing the majority of the resource [and where most of the work has been focused] with over 85k meters of drilling having been completed. But all the drilling to date has not tested below a depth of 400m. The open-pit mineral resource contains 82.63m oz. Ag and 761k oz. Au. The deposit is open along strike and at depth.

The following are some exciting drill results. Recent results confirm high grade silver and gold zones in oxides over significant widths. Drilling has mostly hit oxides but underneath the current resource, the company has intersected high-grade copper in sulphides. These include:

Some 2020 catalysts and milestones include the evaluation of M&A opportunities, additional financing [completed a $5m financing in July 2020], Phase II Oculto (3,000m) drill program, an optimized PEA expected to be completed in the 2H 2020, continued regional exploration potential of Diablillos, and Riot Tinto (which has an option to earn a 75% interest) on Arcas project in Chile.

The company is trading at a discount to its peer group if based on in the ground resources, with EV/Resource of $0.24/share as at July 14th 2020. Some of this relative undervaluation could be due to the uncertainty surrounding the ability to repatriate profits from Argentina over the medium-term or the fact unlike many of its peer’s, the company only has M&I and Inferred resources, no reserves.

While most of the value in the company is derived from Diablillos, its other two assets could unlock value with additional exploration and rising gold and silver prices. Below is a sensitivity table based on the Diablillos PEA using various gold and silver prices. This is preliminary in nature and it is likely many things will change as the company advanced the project towards a feasibility study.

Arcas Copper/Gold Project: AbraPlata entered into a JV agreement with Rio Tinto whereby Rio can earn up to a 75% interest in the project by incurring up to US$25m in exploration spending. The property hasn’t been drilled in a while, with a subsidiary of Teck Resources having last drilled there in 2010. A summary of the key term of the agreement are as follows:

The project is unlikely to be advanced toward a production decision in this cycle, however, it does provide potential optionality value dependent on how successful Rio Tinto is in exploration efforts as well as those undertaken by AbraPlata.

La Coipita: The company entered into an option agreement to acquire 100% interest in the project, located in the San Juan province, Argentina. AbraPlata believes the project will be of interest to larger mining companies and intends to look for a strategic partner to advance the project.

The project is a large 51.55k hectare project located within the prolific Miocene porphyry epithermal belt. Some historic drill highlights include 127m @ 0.42% Cu and 0.22 g/t Au. In order to exercise the option to acquire a 100% interest in the project, the company is required to make the following payments: 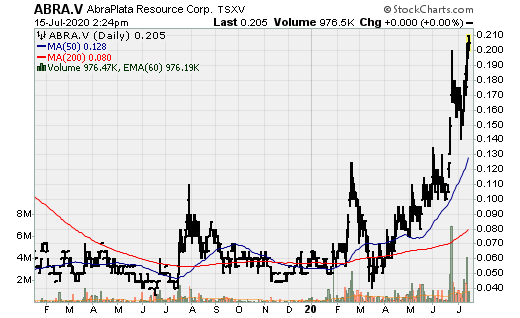