Six weeks ago, we wrote about the growing bullishness of the set-up in COMEX silver. The situation has since grown more extreme, so it's time for an update.

As we begin, you might want to go back and review this post from June 21. Within it, there are some definitions and explanations that will better help you understand this current update:

And how has the price of COMEX silver moved since June 21? See the chart below:

As you can see, price further dipped substantially in the weeks that followed. However, it double-bottomed near $18 and then began a sharp recovery that, as of August 1, has price back to where it was on July 1. That counts as a "shallow" dip, and the risk/reward profile from here remains “heavily skewed toward reward”.

As noted, the most recent CoT survey was last Tuesday, July 26. This was just before the conclusion of the July FOMC meeting where Chairman Jerry Powell uttered these remarks and set off a short-covering rally of nearly 10%.

And what did that most recent CoT reveal regarding the general positioning of the speculators and Banks in COMEX silver? Well, here’s the full “legacy” report from the CFTC via Goldseek:

So that you understand how unabashedly intermediate-term bullish this report was, let’s provide some context.

Now let's dig a little deeper. I have always cited that "legacy" report because it was all that was available when I first started following these reports in 2009. But the CFTC now posts a "disaggregated" report too. And what does it reveal? Take a look:

And again, some explanation from that post of June 21: 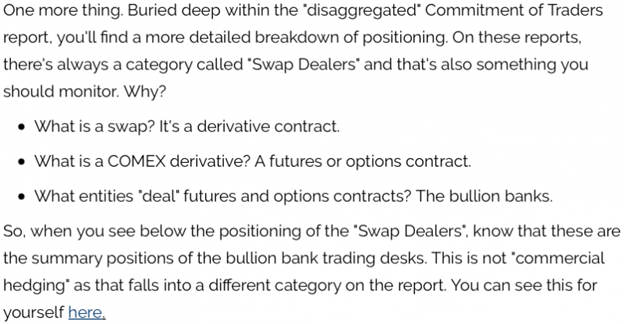 As you can see above on the most recent report, the swap-dealing Banks are now NET LONG 14,560 COMEX silver contracts. Contrast that with the hedge funds, which were seen to be NET SHORT 17,818. If we can all recognize a scenario where the positions are the opposite—where The Banks are heavily net short and the funds are heavily net long and expect a price crash—why wouldn't we expect a rally currently? The Banks always win, right?

Further, these are derivative positions held short by hedge funds that are subject to sharply rising margin costs and do not hold any physical silver to deliver versus their position if called upon. Therefore, the only move these funds have is to cover their shorts into a rising price, should one develop. That's exactly what we've seen thus far since Powell’s remarks last Wednesday and that's precisely what will drive the next surge higher in prices if conditions in other markets will support it.

And what are those conditions?

Technical factors could also serve to exacerbate the pressure on the hedge funds to cover their massive short positions. Next up on the rebounding chart is the 50-day moving average. If price can retake this key level, $22.00, $22.50, and the 200-day moving average could/should be next.

So don't sleep on silver. The first stage of the Spec short squeeze has propelled price nearly 10% higher in the past week, but this move is far from finished. There's a massive pile of shorts still waiting to be squeezed, and then as the Fed shifts policy and the rally continues, the same funds that are net short now will switch to net long as their buying continues.

That's a lot of buying pressure to come. It's exactly what drove the 34% rally in 2019 and the 64% rally in 2020, and if it gets going again, similar gains should be expected for anyone willing to understand the history of how the COMEX operates and plan accordingly.