August 17, 2020 Here’s Every Gold & Silver Correction in Their Two Biggest Runs, vs. Today
June 25, 2020 UPDATE: New Silver Supply Is Drying Up Faster Than Death Valley
April 27, 2020 Why Is Silver Stagnant, and When Will it Start Moving?
April 20, 2020 Is the Extreme High in the Gold/Silver Ratio Setting Up For an Extreme Reversal?
April 01, 2020 Silver Shock Update: A New and Major Threat to Supply

If you’re anything like me, reading about how much the Fed and other central bankers are grossly diluting their currency baffles you, angers you, and maybe even offends you. It’s maddening—and yet that’s the world we live in at this point in history.

But there is a way to protect ourselves. In fact, it is imperative in my opinion that one implement this solution. I don’t like saying I can prove it, but the evidence here is very clear. See what you think…

At the Fed’s open market committee (FOMC) meeting last week, they confirmed, among other things, that they will continue the latest pace of quantitative easing.

What got me is just how much QE they plan to do. The Fed has already conjured up nearly $3.5 trillion this year, with almost all first-world countries doing something similar. When QE was created in 2008 it was supposed to be a temporary measure. Now it’s business as usual, one of their primary tools.

As their own statements says, the Fed will…

To put that amount into perspective, last week cloud data warehousing firm Snowflake debuted as the largest software IPO ever, ending its first day of trading valued at a whopping $70 billion. The Fed will create in currency nearly two Snowflakes every month.

That’s a lot of currency. If you live to 95 you will have been alive for three billion seconds. The Fed is creating 40 times more currency than that every month.

It takes only a rudimentary understanding of economics to know that the more you create of something, the less valuable it is. This is why fiat currency is ultimately a faulty system. Sooner or later central bankers and politicians can’t resist the temptation to solve their problems by creating more currency units. It eventually becomes, as we’re witnessing right now, a literal free-for-all.

This fact stands in stark contrast to real money…

How does the Fed’s monthly currency creation of $120 billion compare to the value of monthly gold and silver production?

The gold mining industry produced 90.9 million ounces globally last year (the latest data available). On a monthly basis this is 7.575 million ounces. Gold’s average price so far this year is about $1,800, which puts the monthly value of production at $13.6 billion.

Silver mining output last year was 760.1 million ounces, or 63.34 million ounces per month. At a $20 silver price, which is slightly above its YTD average, the monthly value is $1.27 billion. 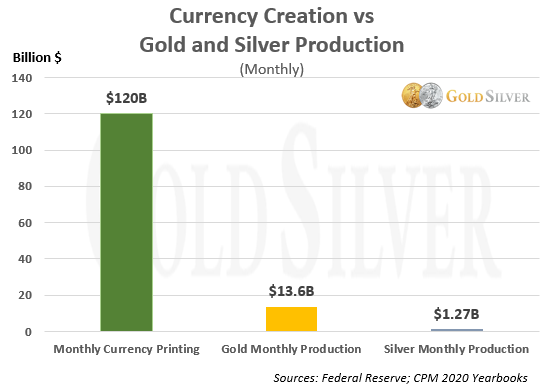 And this excludes the currency other central banks around the world are creating. If we added in their amounts—or just compared the Fed’s efforts to gold production in the US—the chart wouldn’t have sufficient room to display the values for gold and silver.

But it isn’t just value. It’s also the time and effort that goes into producing real money. The Fed and most central bankers create most of their new currency with a computer and mouse—point, click and voila!

But producing real money—gold and silver—takes a full decade, from exploration and discovery to development and production and distribution. 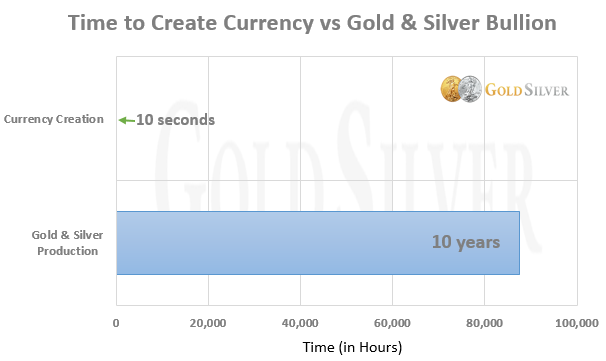 Most currency today isn’t printed. It’s basically “imagined” by a central bank, with the new digital dollars then credited to banks and other entities. Easy peasy.

How valuable is something that can be created in literally seconds? This is one reason a gold standard can work; creating new “money” takes real work and lots of time to bring it to market, which forces discipline on politicians (which is why they’ll fight it if it’s ever introduced).

But here’s the kicker to all this…

Today’s Paycheck Will Never Buy You More Than Now

It’s a sobering thought to realize that the dollar you earned today will never afford you more than it will right now. It will only lose more and more purchasing power as you move forward in life.

Here’s how much buying power the dollar you earned in 2000 has lost (through August). 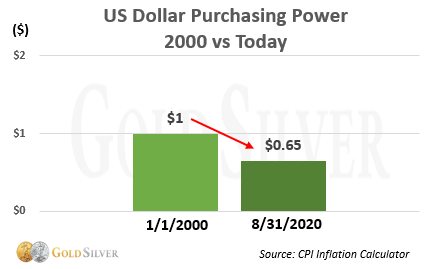 The dollars you were paid in 2000 will now only buy you 65¢ worth of goods and services.

Gold and silver, on the other hand, are long-term stores of value. They maintain purchasing power—and over the past 20 years have increased one’s buying power. 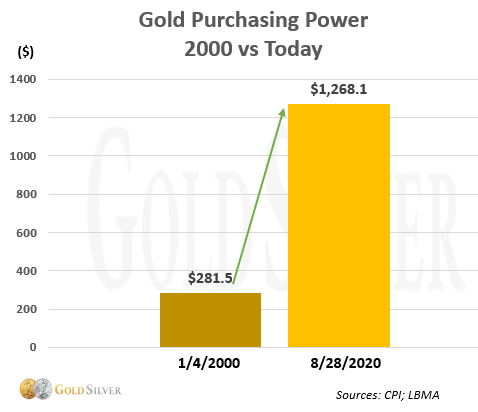 Silver has improved one’s buying power as well, despite not having risen as much as gold during this time period. 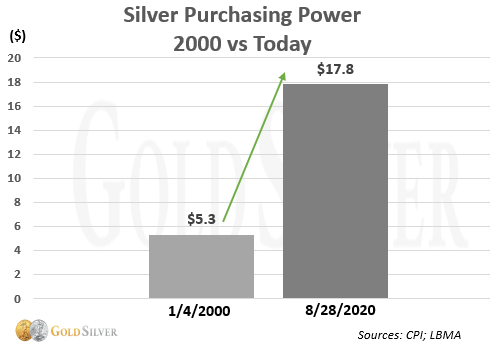 After adjusting for inflation, silver’s purchasing power has grown 235% over the past 20 years. All while the dollar has lost 35%.

Given that silver has historically always outperformed gold in bull markets, it would be entirely unsurprising if its purchasing power exceeded that of gold’s over the next few years.

Keep accumulating, my friends, because the trend shown by these charts is only going to pick up steam.

Which means our buying power will go through the roof over the coming years.