For all their hard work, Fresnillo’s profit margin versus its cost of sales fell to an all-time low of 7% in 2015. This can most certainly be blamed on market intervention, which I will discuss in more detail in upcoming articles.

The chart below shows how the company’s cost of sales has increased to $1.01 billion while their attributable profit fell to only $70 million:

Furthermore, Fresnillo PLC produced a lot more silver and gold in 2015 versus 2005.

Even, though Fresnillo PLC increased their silver production significantly over the past decade, it is their gold production that experienced the most rapid growth.  However, the company enjoyed a much higher profit margin on its cost of sales in 2005 when it was producing a lot less gold and silver.

If we look at the chart above, we can clearly see that the attributable profits for years 2013-2015 were about the same as what Fresnillo PLC made from 2005-2008, but, the cost of sales were three to four times less during the early period than they were from 2013-2015.

As we can see, something clearly changed on Fresnillo PLC’s income statement after 2012.  Again, this was due to market invention by the Federal Reserve and Central Banks via the bullion banks paper trading markets.

That being said, I need to clarify a few things.  While the chart above shows Fresnillo PLC’s cost of sales, this does not include all their total costs.  The cost of sales figures only represent what takes place at the actual mine.  If we add additional costs, such as administration, exploration, selling expenses and even income tax, the total (more realistic) cost is much higher.

For example, Fresnillo PLC’s additional costs were in 2015:

Thus, Fresnillo PLC’s attributable profit of $70 million was even less at only 5% when we compare it to their total revenue of $1.44 billion. 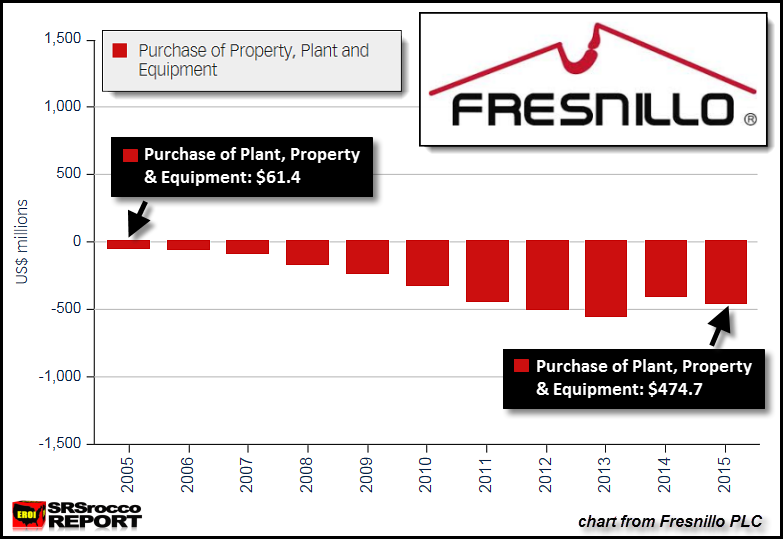 Fresnillo PLC’s capital expenditures were $475 million in 2015 versus $61 million in 2005.  The increased capital costs were due to expansion of new projects as well as increased higher sustaining capital costs.  It would have been nice for Fresnillo PLC to make better profits on the large amount of capital and money they spend to provide gold and silver to the market.

I stated in the beginning of the article that “Market Invention” was the cause of Fresnillo’s deteriorating profit margins.  While many things can be blamed on “market intervention” or “manipulation”,  new evidence released from Wikileaks cable published on GATA’s website, states that it was done on purpose to keep the public from hoarding physical gold.

Again, I will be writing articles discussing this in detail.  However, the primary gold and silver miners are few of the only companies producing REAL WEALTH in the world.  It is a shame that “market intervention” is crippling the only industry that provides the world with real wealth.

Furthermore, the best performing mining companies in the future when the GREATEST FINANCIAL PONZI SCHEME in history starts to unravel, will be those who produce mostly gold and silver.  What I mean by that is a company’s revenue that predominately comes from both gold and silver mining.

Regardless, the market has no clue just how undervalued physical precious metals are as well as the primary gold and silver miners.  When the FIAT MONETARY FAN finally hits the COW EXCREMENT, the market price of these extremely rare assets will surge higher.