March 02, 2021 Bullion Banks Sell Even More Silver: Do They Have It?
February 23, 2021 Is the Reckoning Nigh for Silver Shorts?
February 01, 2021 #SilverSqueeze Underway
January 25, 2021 Demand for Physical Bullion Surges – Will It Break Paper Markets?
November 16, 2020 A Crooked TV-Based “Rare Coin” Dealer Strikes Again

Many investors sense that the country, and the world, has drifted into uncharted territory.

The last year has been extraordinary. There have been COVID lockdowns, a disputed presidential election, and multi-trillion-dollar federal deficits and bailouts. The Federal Reserve has injected more money into markets than ever before.

This insanity showed up in the physical gold and silver markets.

Bullion dealers have spent much of the past year fighting to get inventory, because investment demand for coins, bars, and rounds has never been higher.

The frustration, for both seasoned metals investors and a whole lot of newcomers, is the demand hasn’t been fully reflected in the price. Yes, silver prices have showed strength. But silver has underperformed commodities such as lumber.

The disconnect between physical demand and the spot market price of metals has never been more obvious than over the past month. The COMEX inventory of “registered” silver bars continues to fall. Yet the spot price remains capped.

Last year’s finale in criminal prosecution of JPMorgan Chase, and the billion-dollar fine, apparently changed nothing. The bullion banks and other big-money players seem to have been given carte-blanche to cheat and swindle those still daring enough to speculate in the futures markets.

Below is a picture that tells a remarkable story of price suppression over several decades. It’s worth 1000 words to anyone except for CFTC bureaucrats hoping for a high paying job on Wall Street. 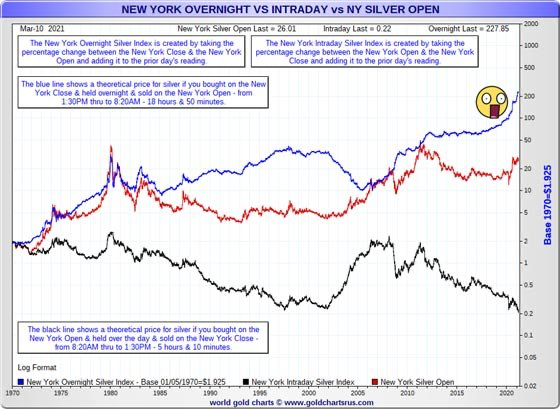 As shown by the blue line, a theoretical investor who bought at the close of trading in New York, held overnight, and sold at the New York opening price would have enjoyed tremendous gains relative to anyone who simply bought and held.

Doing the opposite is shown by the black line. Owning silver only while the New York trading markets are open would have been financially disastrous.

This sort of price behavior would seem impossible in any free, or fair, market. The fundamentals behind precious metals aren’t reflected in a futures market that is dominated by banks who create paper silver supply during prime market hours and absorb much of the demand.

This swindle will continue until a critical mass of people trading in futures realize they likely can’t get delivery of actual metal. That day remains somewhere in the future.

Despite the diminishing stockpiles and the scores of claims against each ounce of silver available, most contract holders still think that bit of paper they hold is a reasonable proxy for the metal itself.

When that day finally arrives, we can foresee a couple of possible outcomes. The price of paper metal may be allowed to explode high enough to balance physical supply and demand.

Or investors will recognize the futures market is a rigged casino and abandon it altogether. If this happens, the price of metal promised on a contract in which few people have any confidence, will be increasingly irrelevant.

The real price of gold and silver will ultimately be set in physical markets.