This was another week full of production results from gold and silver producers. This is far and away the most companies I’ve ever seen reporting quarterly production numbers instead of waiting until earnings. Again, this is likely because investors who know production numbers ahead of earnings could lead to buying earlier, pushing up stock prices. Other than some companies making construction decisions, reporting exploration results, there wasn’t much news outside of the release of production numbers as well as little economic development taking place. This is likely to remain the case until the election are over.

Argonaut Gold: Announced that the Board of Directors has approved the construction of the Company’s 100% owned Magino gold project in Ontario, Canada. Argonaut received a fixed bid pricing proposal for a significant portion of the initial capital requirement for the Magino project and that it has secured debt financing of up to $175m by way of a $50m bought deal offering of senior unsecured convertible debentures and the extension and expansion of its existing revolving credit facility up to 125m. At quarter end, the company had cash balance of $178m. It has also received $30m from the Sale of Ana Paula (which I don’t believe they received adequate compensation nor think it was wise to divest the high-grade, low-cost development project). Further, the company is expected to generate operating cash flow of $142m through 2020 (using a $1,600/oz. gold price). In short, the company is adequately financed for the mine build which is estimated to require capital investment of $360-$380m. Magino is a game-changer for the company, not only regarding a significant increase in production and free cash flow but its cost of capital improve by having a flagship asset in Canada. 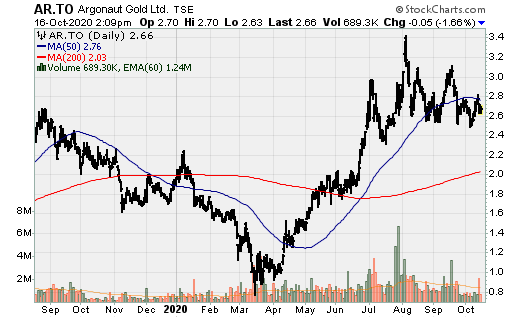 B2Gold: Another great outperformance by the company, setting records for quarterly production, revenue and in all likelihood, cash flow generation. Q3 production totaled 248.73k oz. Au from its operating mines (and 263.8k oz. Au including attributable production from Calibre Mining, of which it holds a 34% interest). Revenue totaled $487m for the quarter, a 57% increase over Q3 2019. The company also announced a 100% increase in its quarterly dividend to $0.04/share. During the quarter, the company also successfully commissioned the Fekola mill expansion to 7.5mtpa, a 25% increase but it has the potential to run above that throughput rate, with an internal analysis underway to determine the optimum rate. B2Gold is now debt free (except for mining equipment loans and leases totaling roughly $50m). Subsequent to quarter end, Calibre repaid the $10m owed to B2Gold as part of the acquisition of its Nicaraguan assets as well as a $5.5m working capital adjustment. 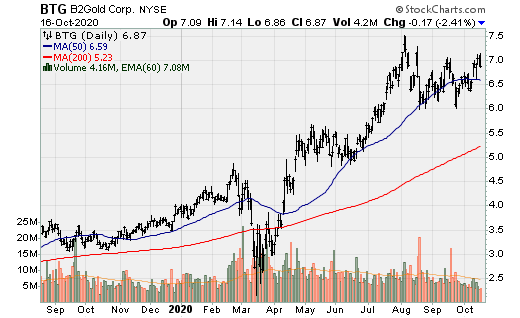 Discovery Metals: The company reported more high-grade intercepts at its flagship Cordero project and extended the strike length of the Todos Santos vein (which now has a minimum strike length of 1.5km’s). Highlights include: 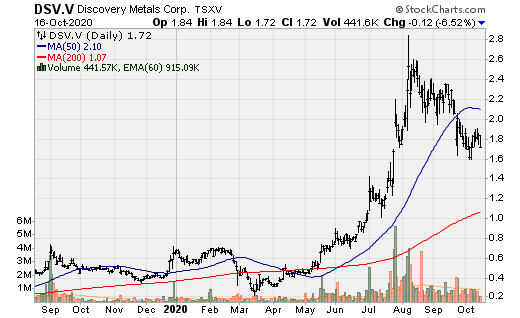 What the Fed DOESN’T Want You to Know About Inflation