Precious metals markets are on the move this week.

They got a boost following Wednesday’s Federal Reserve policy statement. Fed officials kept their benchmark interest rate near zero and vowed to continue injecting $120 billion per month into the bond market.

The central bank seemed unconcerned about bubble-like conditions in equity markets. Nothing seems likely to deter it from pursuing more stimulus for the foreseeable future.

The ultra-dovish Fed helped nudge the U.S. Dollar Index down. It broke below 90 on Thursday to record a new low for the year.

In fact, silver appears to be launching toward a major technical breakout. The white metal gained two dollars through Thursday’s close to clear $26 per ounce. More importantly, it cleared through a zone of resistance to hit a 12-week high. 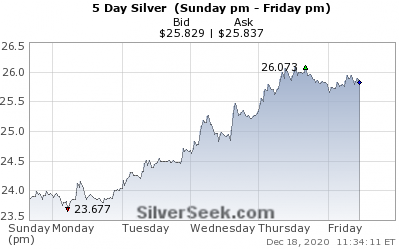 A strong weekly close that confirms the breakout could lead to a big year-end rally and perhaps set the table for a record run in 2021.

As precious metals buying shows signs of picking back up, perhaps some investors are beginning to rethink the risks of holding conventional paper assets such as U.S. stocks.

Yesterday, the S&P 500 hit a new record – on the same day as America hit a grim record for daily coronavirus deaths.  As California and New York City lock down, a new wave of business closures and job losses will hit the economy to close out the year.

Millions are struggling like never before just to get by as they wait for a stimulus check or some kind of Christmas miracle to arrive. Much of the country is suffering through nothing short of a great depression.

Yet on Wall Street it’s boom times. Never before have we seen so extreme a divergence between the real economy and the exchange-traded economy.

The stock market boom is being artificially fueled by Fed policies. For now, nobody seems concerned about any negative side effects of all the stimulus. The only concern being voiced about stimulus in the mainstream media is that Congress hasn’t done enough to get more of it out into the hands of ordinary Americans.

What ordinary Americans may be facing after the virus recedes and the lockdowns lift is rising costs of living. In fact, that is one of the explicit goals of the Fed’s money printing campaign.

Jerome Powell and company have declared that inflation has been running too low in recent years. They want to push it higher. They even welcome overshoots of their stated inflation objective.

Yet stocks and bonds are priced as if price inflation will never gain traction. In fact, these asset classes have lately been the primary beneficiaries of an exploding money supply, which has yet to have an obvious impact elsewhere.

The supposed justification for all the stimulus is to help the economy recover.

In the event the economy does show strong growth next year as the coronavirus fades away, a lot of pent-up demand could trigger a surge in consumer and producer prices.  A huge supply of emergency rescue dollars could suddenly start chasing a more limited pool of raw materials and finished products.

Stimulus-fueled gains in financial markets could turn into pains for investors who expect to continue riding the Fed’s expansionist wave through conventional paper assets. The Fed can inject liquidity wherever it wants initially, but it cannot control where its newly created trillions of dollars ultimately end up.

An unintended consequence of bailing out everyone from Uncle Sam to junk bond issuers on Wall Street may be to undermine the credibility of U.S. dollars and catalyze an ultra-bullish phase in gold and silver markets.

Gold and silver bulls will be looking for a transition in investor psychology to take place – from paper assets being the preferred investment vehicles to an environment where hard assets are in favor. Obviously, that hasn’t happened yet.

It needn’t be the case that the bond market or stock market crash before metals markets can shine. Outperformance and positive divergence can take place over time regardless of whether stocks hold up in nominal terms or the Fed keeps bond yields suppressed.

The upshot is that precious metals, especially silver, have a great deal of room to run on the upside before being close to being as historically expensive as the stock market is right now.

Prior to joining the company in 2010, Mike Gleason was a systems consultant for two Atlanta-based companies in the warehouse management / inventory control industry for over 10 years. Gleason won various sales awards at Stratix Corporation and BarCodeID Systems.

Gleason is a hard money advocate and a strong proponent of personal liberty, limited government, and the Austrian School of Economics. A graduate of the University of Florida with a B.S. degree in Telecommunications, Gleason puts his longtime broadcasting background to good use, hosting a weekly precious metals podcast since 2011, a program listened to by tens of thousands each week.