Silver Seeker Issue #53 ~ This Week in Mining: Gold Trying to Find a Bottom..

Gold takes it on the chin again, dragging down silver along with it. Silver remains above key support levels, while gold has broken through. I believed gold would bottom somewhere around $1,680-$1,710/oz. Gold has tested $1,687, and continued selling pressure could push gold down further. There is support $1,630-$1,650/oz. and it wouldn't be surprising to see that tested. Mining stocks continue to trade as if gold were $1,400-$1,425/oz. This makes a great buying opportunity for quality gold and silver companies for those willing to hold beyond the very short-term. Mining companies continue to report excellent earnings. The average price of silver is quite a bit higher in Q1 relative to Q4, so while gold companies' earnings won't be as strong in Q1 vs. Q4, silver companies will continue to shine.

Bluestone Resources: Announced the preliminary economics assessment findings (PEA) that highlight an optimized project. An open-pit development scenario more than doubles the gold resource and average annual production over a longer mine life relative to a smaller, underground development scenario. The open-pit scenario yields an NPV5% that is 3x greater than that envisioned in the underground FS. Highlights of the PEA include; 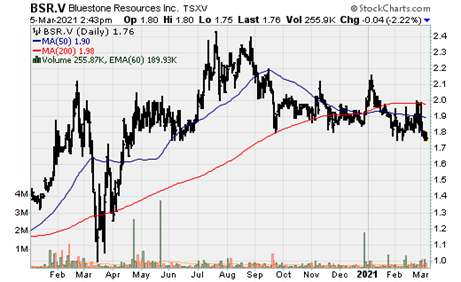 Dundee Precious Metals: Provided an update to its Tsumeb smelter operations in Namibia. The smelter has been shut down as scheduled for 30-days, which is now expected for up to 40-days. Operations are expected to return to normal at the end of March. The extended shutdown reflects CV-19 related protocols and travel restrictions, as well as a decision to increase the scope of the maintenance work after encountering water in the furnace.

Euro Sun Mining: Announced the results of a feasibility study for its Rovina Valley gold-copper project in Romania. Highlights include:

Equinox Gold: Announced it has increased its interest in the Hardrock project by 10% to 60%. It will pay Orion Mine Finance $51m, $41m of payable upon closing, and the remaining $10m via production milestone payments. Equinox also released Q4 and full-year 2020 results. Equinox produced 477k oz. Au in 2020 @ AISC of $1,027/oz. The company generated $231m in operating cash flow, a big jump relative to 2019 when the company generated $60m in operating cash flow. AISC in Q4 trended higher, and costs will be elevated in 2021 due to significantly higher and temporary operating and sustaining capital costs. There will be pit expansions and a lot of stripping at its open-pit operations. AISC will peak earlier and trend lower through year-end, falling significantly in 2022 and beyond.

First Majestic: The company has submitted a request for arbitration to the International Center for Settlement of Investment Disputes on its own behalf and Primero Empresa Minera's behalf (its Mexican subsidiary), based on Chapter 11 of NAFTA. The government of Mexico won't engage in good faith negotiations to resolve this dispute. The dispute is over the transfer-price of silver on the old silver-stream when Primero operated San Dimas for 2010-2014. I remember when the Mexican government agreed, Primero will be taxed at the transfer price ($4/oz. + 1% inflation adjustment) regarding the silver stream agreement with was then Silver Wheaton (now Wheaton Precious Metals). The government is going back on what they initially agreed upon, which is well documented. It isn't surprising as the inherent nature of governments is to steal from the private sector. What makes this so egregious isn't just that they are attempting to recoup lost tax revenue but the massive penalties and interest they are seeking, which total over $500m!

New Found Gold: Announced drill results from an interval drilled 125kn down plunge to the south of the previously reported intervals at the Keats zone, doubling the known extent of the high-grade gold mineralization at Keats. This interval was 11.4m @ 29.10 g/t Au.

Osisko Development: The company continues to report high-grade drill results at Cariboo from the exploration and delineation drill program on the Island Mountain, Mosquito Creek, and Shaft zone deposits. Highlights include:

Bonanza Ledge II was initially projected to come online in early Q1 2021. This hasn't happened and is now expected in Q2. San Antonio is scheduled to come online before the end of 2021, with minimal capital investment required. In 2022, these smaller assets with produce a combined 100-120k oz. Au. the company will target initial production from San Antonio of 50-70k oz. Au p.a. but plans to expand production.

This will be followed by its flagship asset at Cariboo, reaching production in 2023 (expected). There is a short buildout period, and the FS study (optimized for higher throughput) is expected in the second half of 2021. Cariboo is estimated to produce 185-215k oz. Au p.a. and has significant production and exploration upside. Osisko Development is fully-funded to bring BL II, San-Antonio, and Cariboo into production with C$200m in cash and $122m in investments (plus on-going cash flow generation from BL II and San Antonio when Cariboo is being constructed).

Puregold: Surface exploration intersected high-grade gold at three targets near its Puregold mine. Dill highlights include:

Roxgold: Reported Full-year 2020 results. The company produced 134k oz. Au @ 8.49 g/t at cash costs and AISC of $692/oz. and $1,004/oz. The company's balance sheet continues to strengthen with a cash position of $62m and a net cash position of $27.3m. The company has commenced early works at its next development project, Seguela, with a ramp-up to full construction activities expected around mid-year, following the FS release in Q2.

Victoria Gold: Announced 2021 production and cost guidance. Victoria Gold continues its ramp-up at its Eagle mine and is expected to produce 180-200k oz. Au in the first full year of commercial production. AISC is estimated to $1,050-$1,175/oz. The company expects to run at full capacity in the 2H 2021. As such, production will be strongly weighted towards the 2H of the year. AISC should trend lower in 2022 and beyond (though unlikely to achieves AISC outlined in the FS) as the company will incur one-time costs on infrastructure spending, including the construction of the truck shop ($8m) and water treatment plant ($11m). Victoria will spend $8m on exploration with a likely focus on the high-grade Raven zone. 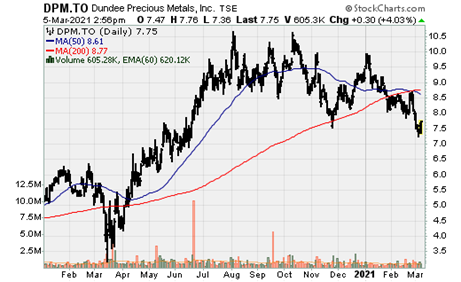