Commentaries
The Great Lockdown: Could This Cause The Worst Economic Downturn Since the Great Depression
Silver Stocks
AbraSilver Announces Significant Increase in Mineral Resource Estimate for Diablillos
Commentaries
The Silver Squeeze is Brilliant & Working - David Tice
Commentaries
The Short Position in SLV Jumps Almost 20 Percent
Commentaries
If Silver Could Talk: What She Told Me When I Wrote to Her

The Story of Silver’s Future as Money Is Yet Untold

In addition to the white metal’s growing uses in high-tech and alternative energy industries, some silver bulls are banking on rising bullion demand by retail investors and a possible reinvigoration of its use as currency.

The story of silver’s history as money has been largely forgotten – and sometimes shortchanged even within sound money circles, where gold tends to grab most of the attention.

Silver, in fact, has been more widely circulated as coinage throughout history than gold.

According to The Story of Silver: How the White Metal Shaped America and the Modern World by William L. Silber, “Silver dominated gold as the preferred currency for most of recorded history primarily because it was scarce but not too scarce, so that it held its value but was sufficiently abundant to support expanding trade.”

Because its value is so highly concentrated, gold is more useful as a store of wealth than for executing everyday transactions. But silver’s value concentration is perfect for being minted into circulating coins.

Silver coins were circulated as money in the United States through 1964. But the process of dismantling the central position of gold and silver in the monetary system was decades in the making.

Even before the creation of the Federal Reserve in 1913, certain banking and political interests had worked to de-monetize silver.

In 1873, Congress moved to sideline the silver dollar. That sparked the so-called Free Silver Movement, which stood for allowing the supply of silver coins to be increased in accord with demand.

In 1896, populist orator William Jennings Bryan gave his famous “Cross of Gold” speech before the Democratic National Convention: “We shall restore bimetallism. You shall not press down upon the brow of labor this crown of thorns. You shall not crucify mankind upon a cross of gold.” 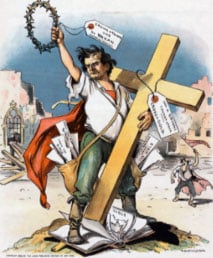 “Beginning in late 1933, after gold had already been nationalized and confiscated, the Treasury began to intervene in the silver market by paying double market prices for domestic newly-mined silver – all in exchange for political support for FDR’s New Deal from politicians in Western mining states,” writes Joakim Book of the American Institute for Economic Research.

By 1962, the Kennedy administration declared that it was “uneconomical” for the Treasury Department to continue stockpiling large quantities of silver as currency reserves. Shortly thereafter, the government moved to stop printing silver certificates and minting silver coins.

Is that where the story of silver as money ends? No, not as long as it continues to be accumulated by individual investors in spendable form.

Meanwhile, the ability to buy and spend silver on the digital blockchain is expanding. Smartphone apps linked to physical silver accounts could also help facilitate a resurgence in silver being used as currency.

But according to Gresham's law (“bad money drives out good”), people prefer to spend depreciating fiat currency and hoard monetary assets that are superior stores of value.

As long as Federal Reserve Notes retain their compulsory legal tender status, the primary monetary role of precious metals will likely be as non-circulating money.

Gold is the preferred money metal for the ultra-rich and institutional holders including central banks.

Silver is the preferred monetary metal for those of limited means and those who aim to opportunistically capitalize on silver’s relative cheapness versus gold.

If silver were to become more widely accumulated and recognized as hard money, then gold’s monetary premium over silver would likely shrink.

Today, gold trades at about 74 times the silver price. Historically, it tends to revert to a ratio of about 16:1. Were that to again occur, the gains in silver could be explosive.

Nobody knows what the future will bring, but the lessons of history can help ground our strategies and frame our expectations.

Today’s monetary and political elites want us to cast history aside. They want us to follow the “experts” and their (often shifting) opinions, embrace whatever new technology is being pushed, and religiously obey the latest “woke” dictate (which didn’t even register as an issue just a few years prior).

Today’s generation is the first that will be known for the historical monuments and statues it ripped down with self-righteous glee rather than the ones it created.

The level of narcissism involved in holding history in contempt for failing to reflect what the cultural zeitgeist happens to be at this particular moment in time also robs future generations of an opportunity to interact with the past on its own terms.

On the monetary front, central planners at the Federal Reserve and International Monetary Fund are busily drawing up plans to get rid of all physical currency and force the public to go completely digital. That way, all transactions can be tracked and taxed in real time.

History tells us that all fiat monetary systems eventually fail – sometimes slowly, sometimes suddenly. Neither paper nor computer digits emitted by central banks can be relied on retain value over time.

But gold and silver have always retained theirs. With thousands of years of history behind them, investors can have confidence they will continue to hold real value in the future regardless of whatever official or unofficial roles they play as money.

In Gold We Trust