November 22, 2020 Americans Are Leading The World By Hedging Their Bets In Silver
October 02, 2020 THE FORMER INDUSTRIAL METAL: The Silver Price Surges As Copper & Oil Get Crushed
September 18, 2020 How Much Silver Bullion Was Sold By The Top Three Official Mints So Far This Year?
August 31, 2020 Silver Is the Better Investment: Massive Financial Bubbles Everywhere
August 24, 2020 Important Silver Market Update: Next Week Price Action Will Set the Trend

After months of the U.S. Mint dealing with supply issues, shutdowns, and new employee policies dealing with the global contagion, sales of Silver Eagles finally jumped in August.  Due to the U.S. Mint implementing new employee safety guidelines at the mint, they are only producing either Gold or Silver Eagles for a given period.  They are not minting both bullion coins simultaneously.

Furthermore, it seems as if they have focused more on producing the 1 oz Gold Eagles, as sales of the smaller denomination coins in August are non-existent.  Of the 69,500 Gold Eagles produced so far in August, all of them are 1 oz coins.

Here is the chart of U.S. Mint Silver Eagle sales from March to August 17th.  Actually, the last time the U.S. Mint updated their sales figures was on Friday, August 14th.  But, regardless… as we can see, Silver Eagle sales for August are already 1,593,000, higher than any month since March. 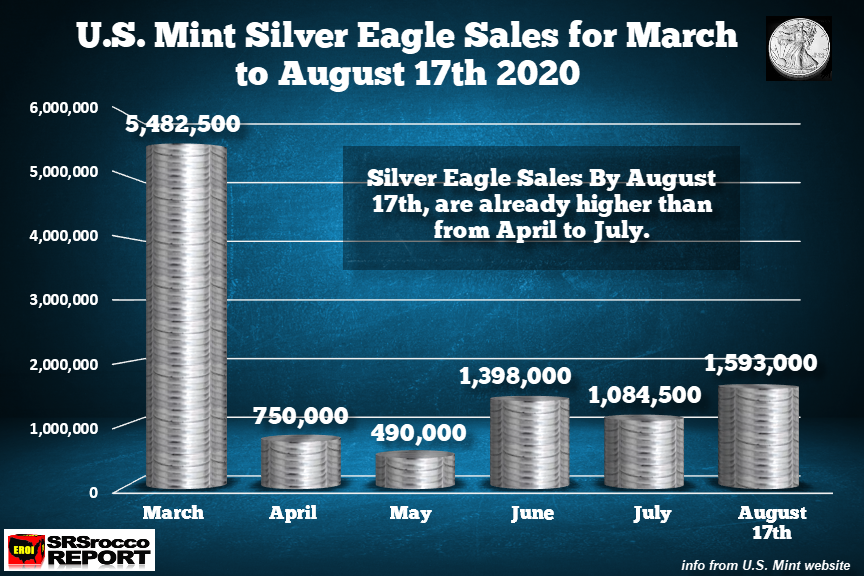 When the global contagion hit in March, as the Dow Jones Index was plummeting more than 10,000 points, investors wiped out dealers of all their Silver Eagles inventories.  In March, the U.S. Mint sold a record 5,482,500 Silver Eagles, the highest monthly total in more than four years.  When the U.S. Mint temporarily shut down operations on April 16th, Silver Eagle sales hit a low in May at 490,000.

Then in June, Silver Eagle sales picked up once again to 1,398,000.  However, when concerns about the spread of the virus surfaced again at the U.S. Mint in July, new employee guidelines forced the facility only to produce Silver or Gold Eagles separately.  Furthermore, in a Bloomberg article on July 27th, the U.S. Mint asked its Authorized Dealers to provide:

their 10-day and 90-day forecasts for demand for the first time ever. That will allow it to decide what products to make as some are more labor-intensive than others, according to the document. If the Mint decides to make one-tenth of an ounce of gold, for instance, it must cut production of American Eagle Silver coins.

So, as it stated in the quote above, the U.S. Mint facility seems to be curtailing production of the smaller Gold Eagle denomination coins for it to fill backorders for the Silver Eagle.

Now, if we look at the Gold Eagle sales, we see a similar trend as the Silver Eagles. 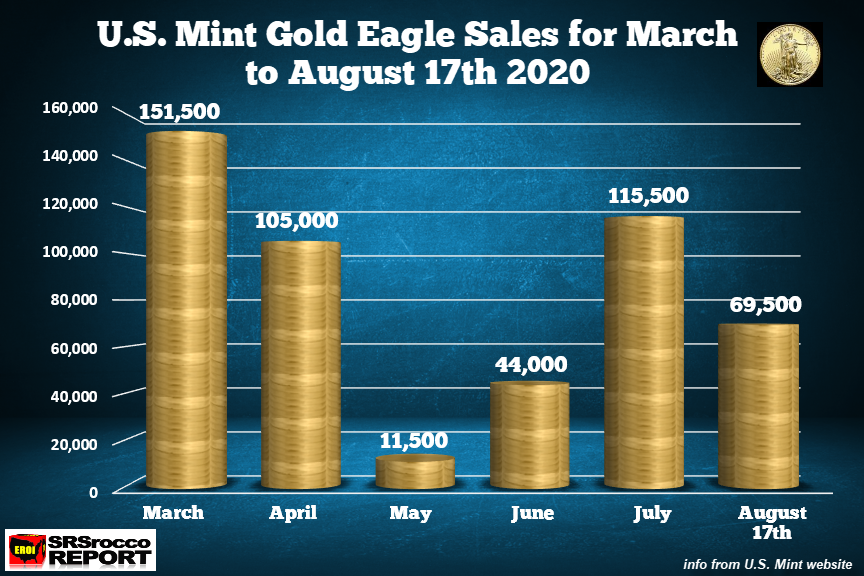 As with the Silver Eagles, Gold Eagle sales surged in March and then fell to a low in May.  However, the July sales figures at 115,500 oz are much higher than the 69,500 oz sold so far in August (17th).  Thus, it seems as if the U.S. Mint is listening to its Authorized Dealers as it’s producing more Silver Eagles than Gold Eagles.

With the silver price now trading above $27 per ounce, investor, the demand for Silver Eagles continues to be very strong.  It will be interesting to see how the silver investment bullion market plays out over the next several months.  As I stated in several past articles, if the silver price falls considerably, then demand for retail bullion products will skyrocket once again.  And, if the price continues to rise, demand will most likely remain robust.

I wanted to remind followers that the SRSrocco Report will be transitioning to a Subscription Service by Friday, August 21st.