How Much Silver Bullion Was Sold By The Top Three Official Mints So Far This Year?

The top three official mints sold a great deal of retail silver bullion products in the first half of 2020.  However, the sales figure could have been a great deal higher if the various government mints weren’t forced to shut down production.  The top three official mints in retail silver bullion sales are the U.S. Mint, Royal Canadian Mint, and the Perth Mint.

According to the data from the 2020 World Silver Survey, for last year’s figures, the Royal Canadian Mint sold 25.8 million oz (Moz) of silver bullion products, followed by the U.S. Mint at 19.5 Moz and the Perth Mint with 12.7 Moz.  The majority of the 19.5 Moz of U.S. Mint silver bullion products sold last year were from the 14.9 Moz of Silver Eagles and 1.5 Moz of the Five-ounce American The Beautiful Silver Coins with the remainder in Silver Eagle Proofs, collectibles, and various numismatic coins.

Regardless, if we look at the first half of 2020, here is the increase in silver bullion products from these top three official mints. 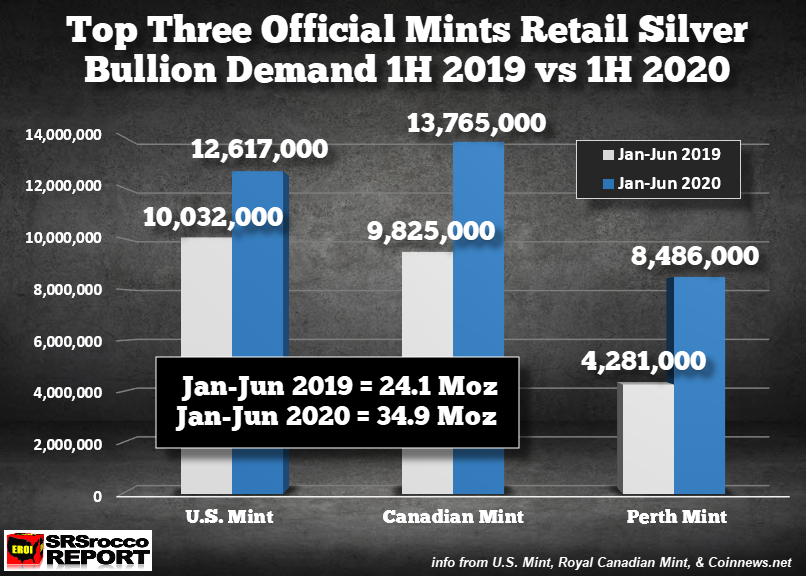 In the first six months of 2020, these top three official mints sold 34.9 Moz of silver bullion products versus 24.1 Moz during the same period last year.  That turns out to be 10.8 Moz more silver bullion products sold 1h 2020, or 45% higher than during 1H 2019.  We can see that the Perth Mint’s silver bullion sales nearly doubled 1H 2020 versus 1H 2019, likely due to mints ability to keep its operation open longer versus the U.S. and Royal Canadian Mints.  Australia’s shut down due to the pandemic was less severe compared to the United States and Canada.

Now, if we look at the difference in these three official government mints’ silver bullion product sales in 2020 for the most updated figures, the change since last year is even greater.  While the Royal Canadian Mint only provides updates quarterly, the U.S. Mint and Perth Mint do so every month.  And, the U.S. Mint updates their Silver Eagle sales figures even more regularly than the Perth Mint.

The next chart shows the most up to date figures for these three official mints. 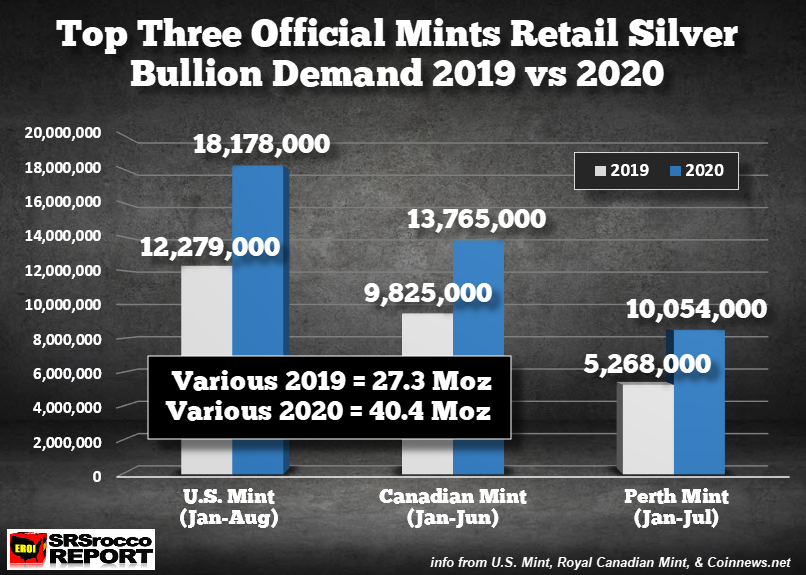 The U.S. Mint’s total Silver Eagle sales are nearly 18.2 Moz for Jan-Aug 2020 versus 12.2 Moz for the same period last year, while the Perth Mint’s increased from 5.2 Moz to 10 Moz.  Again, as stated above, the Canadian Mint will not update its figures until its Q3 2020 report comes out in late October or early November.

The total silver bullion sales from these official mints (at various periods) is 40.4 Moz versus 27.3 Moz last year.  As I have stated many times, I believe we are just in the beginning stages of the MASSIVE SILVER BULLION DEMAND to come in the future.

Americans who purchase mostly Official Silver Coins & Rounds will be thrilled they did when future supply dries up, only at much higher prices.

I will be providing more updates as the data is released from these mints.