August 05, 2021 Why You Should "Top Off" Your Silver and Gold Holdings before Labor Day
March 11, 2021 Magflation: An Unexpected Silver and Gold Driver
December 08, 2020 Is Silver (finally!) Set to "Cross the Rubicon"?
December 02, 2020 Don't Let the Silver (and Gold) Bull Shake You Off!
October 22, 2020 Silver's Coming Double Trigger Shotgun Price Explosion

How to Survive a Silver-Gold Sucker Punch

Anyone who owns precious metals, mining shares or metals' ETFs knows the drill.

First, gold and silver begin to establish an uptrend on the charts. Analysts (like us) start writing about how prices are getting ready to make an upside run.

Then "out of nowhere" thousands of highly margined futures contracts hit the market on the short side, "re-painting" the charts, sending terror into the hearts of stackers and those who believe in "honest money."

The reality is that honest money is being manipulated for personal gain by dishonest traders, enabled by "regulators" who, to put it charitably, look the other way.

It can be disheartening. It can make you feel helpless.

And worse, it can knock you off what David Morgan, Doug Casey, and others believe is destined to become the biggest precious metals and mining stock bull run of our lifetimes.

But you can get back up again and persevere on the path to the Winners' Table.

Years ago, when I was moving through the Dan ranks in martial arts' study with my revered Sensei (who unexpectedly passed away last December, ending – at least on this plane – our 33-year relationship), I was given an assignment.

"Choose two or three self-defense situations you've been in when you felt unable to respond, and design effective, multiple-response counter attacks," he said. 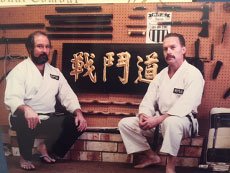 Remembering how in third grade I had been sucker punched by a supposed friend when I reached out to shake hands, and how terrible that felt, I went to work on a solution.

I trained full-out for five minutes, then stopped, breathed out fully – and held my breath to see what kind of offensive response(s) I could execute.

Surprisingly, even though my lungs were oxygen-deprived, I was able to perform several powerful empty hand and kicking techniques.

In the event, these would have provided an effective self-defense solution, even before breathing in to refill my lungs. (This capability also holds true for run, stop, draw-and-fire sidearm practice.)

Not long ago, when silver was dropping $2.50 an ounce, with gold down $75, a metals dealer had this to say:

"The Big money always moves way ahead of the crowd. And if you look at what sophisticated money on the planet is doing; they're using price as a cover; manipulated price as a tool of misdirection, to accumulate.

Today, silver and gold are getting crushed like I've never seen (yet) our phones have been ringing off the hook for the past couple of days, as the price has dropped...and no one is selling anything... This is nothing more than a function of a paper price hit-and-run; a paper price drive-by shooting. As soon as the Commercials get to where they can cover, the price will turn around.

The whole concept of the art of war is misdirection.

They (the "Floor traders") realize that people are so inundated with life that they don't have time to look under the hood.

So how do you control price or sentiment? You beat the heck out of the price and espouse negative rhetoric across the gamut of big-business-controlled media...

This allows big money to accumulate gold and silver in copius amounts without being crowded out of their trade.

In a daily column titled, "This is No Time to Give Up on Gold," Rick Ackerman, of Rick's Picks, commented about the metal's swoon:

With gold's gratuitous, 4% plunge on Friday, bullion has once again affirmed its reputation as one of the nastiest, most frustrating assets an investor can own. Its chief enemy is a global network of shamans, thimble-riggers and feather merchants who make their living borrowing bullion from the central banks for practically nothing, then lending it to everyone else for slightly more.

They are always looking for excuses to pound quotes so that they can replace what they've borrowed at a lower price. Helpful to this goal is a story that, however ridiculous, spooks gold bugs into dumping their holdings.

The massive selling of metals is an illusion. And yes, it's been going on for quite a while.

During a 2010 CFTC hearing, CPM Group's Jeff Christian testified that: "Precious metals trade in a multiple of a hundred times the amount of the underlying metal." In other words, prices are manipulated and suppressed with bets placed on tons of imaginary or non-existent metals.

In his book "Rigged: Exposing the Largest Financial Fraud in History, Stuart Englert concludes that "More imaginary gold and silver is traded in a few days than is mined in an entire year.

Such large-scale trading is at the heart of the price suppression scheme. This supply illusion causes the paper metals' price to be manipulated lower, even if demand is rising!"

So... how can YOU respond to these periodic "shakedowns"?

Ideally, as Master Miyagi in The Karate Kid movie would say, "Don't be there." You can sidestep a lot of the action by not trading on margin, buying your physical in tranches rather than all at once, and saving some capital to deploy during one of these take downs.

Of course, if you have a position, you'll need to suffer through some short-term pain while prices get back to recognizing true supply/demand reality. But now that you know what's going on, it should help you dial down the emotions – and certainly not give up!

One of the core principles that David Morgan at The Morgan Report teaches is that "The market is ultimately bigger than any attempts to subvert it." Keeping this in mind can enable you to "stay long and strong" while the inevitable sorting out takes place, and metals prices bounce back quickly thereafter.