During the 1970's, the U.S. experienced a decade of below-trend economic growth combined with rising interest rates – and eventually – massively higher gold and silver prices.

Some sectors boomed while others lagged, and then as now, the majority of the population struggled with rising home and commodity prices, bookmarked by lofty interest rates.

This stilted and challenging environment, which came to be called stagflation, eventually drove the more perceptive people into gold and silver.

As per usual on a percentage basis, silver rose even more, topping out at $50 the ounce.

For years now, (officially-stated) inflation has been annualizing at one or two percent per year. Most people, including the current generation of market participants, have little or no memory of the relatively high inflation, interest rates and metal's prices of the late '70's.

They may be about to get a shock...

Mexican bandits, when attempting to relieve victims of their money, might ask them "Plata o Plomo?" – Silver or lead (bullets)?

.22 rounds for sale at a local gun range. 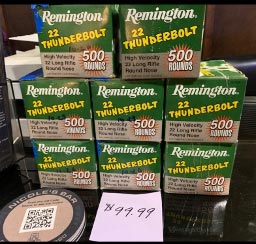 Given that demand and the rising cost of components have now priced ammunition several times higher in all calibers than last year, perhaps those who stack both silver and ammo should change this phrase to "Plata y Plomo"... Silver and Lead.

The picture nearby from a local gun range shows something well beyond the Fed's sub-2% inflation target.

But then they also said it would be acceptable to let inflation "run hot." Last year a box of .22 rounds could be had for less than $25. Is the Fed getting what they asked for?

This debate has gone on for several years as governments continue to ramp up spending. Oversimplified, if they let our debts default, the result is deflation.

If the printing press and spending spigot remain unchecked, then inflation is more likely. Excessive demand, loss of confidence, and increased money velocity (turnover) leads reliably to the inflationary door.

A few asset classes like the stock market and most real estate sectors initially keep up but later on lag severely, as purchasing power declines precipitously.

But gold and silver catch a wave, and wealth preservation for the lucky relative few, historically topping out at 2.5 - 3% of the population's assets, is largely assured, enabling a small minority to seriously blunt the inflationary impacts on their material wealth.

Since August 2020, it hasn't been a bed of roses for metals/mining shareholders.

However, as Lobo Tiggre states, "No price goes up forever without taking a break. That's why they call it a correction...In short, I see any near-term correction as a buying opportunity for commodities - even more so for gold and silver, which are monetary metals as well - notice that silver falls into both categories."

Prices UP? More buying of gold and silver. Prices Down? Same Story.

Perth Mint minted product sales for both gold and silver soared during February, with more than 124,000 troy ounces of gold, and more than 1.8 million troy ounces of silver sold during the month. Relative to February 2020, sales increased by more than 400% for gold and 200% for silver, as investors took advantage of lower precious metal prices.

The Federal Reserve has only three ways to "deal with" debt: make significant cuts in deficit spending; substantially raise taxes; or let inflation drive economic policy, with the end result that government debts are paid off in increasingly worth-less paper. 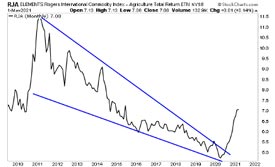 Given the way politicians and the currency creators have historically dealt with this, I'd cast a strong vote for the inflationary "solution."

What indications do we have right now that not only is inflation higher in disparate sectors of the economy considerably than the government's highly- manipulated statistics tell us, but even more important, that the rate of increase is moving at a worrisome (to us) speed.

Few people are aware that, even as the Feds tout the validity of the CPI in tracking inflation – both current and expected – they openly admit food prices are the most accurate predictor of inflation!

No less an establishment thinker than former U.S. Treasury Secretary, Lawrence Summers, opines, "I think there's a real possibility that within the year, we're going to be dealing with the most serious incipient inflation problem we have faced in the last forty years."

Consider that – starting right now – elevated inflation, concomitant with uneven economic growth and massive deficit spending via guaranteed income and the likely build out of MMT - is going to duplicate the deleterious stagflationary effects of the '70's... on steroids!

Got silver? Got lead?