August 05, 2021 Why You Should "Top Off" Your Silver and Gold Holdings before Labor Day
March 11, 2021 Magflation: An Unexpected Silver and Gold Driver
January 20, 2021 How to Survive a Silver-Gold Sucker Punch
December 02, 2020 Don't Let the Silver (and Gold) Bull Shake You Off!
October 22, 2020 Silver's Coming Double Trigger Shotgun Price Explosion

Is Silver (finally!) Set to "Cross the Rubicon"?

History is full of intriguing sayings coming down to us from other cultures that inform our thinking and behavior.

"Managing a large state is like cooking a small fish." – Lao Tzu.

One I especially like tracks back to Julius Caesar after ending his governance of the Roman province of Gaul and being ordered to disband his army. Under no circumstances was he to come closer with it than a small stream outside of Rome.

Yet Ceasar decided to cross the Rubicon and march on the capital, knowing there was no turning back and his likely fate if the venture failed. He supposedly told his men "The die has been cast!"

I have followed the ups and downs of a certain white metal since reading Harry Browne's books in the 1970's on life, living... and silver.

Somehow surviving the 1980 Hunt Brothers' debacle after the run to $50 and subsequent collapse below $5 over the next 22 years, I happened into a local coin shop in 2000 and spied a printed copy of Jim Puplava's "The Perfect Storm: Rogue Wave" about a financial tempest that would generate a massively destructively wave coming seemingly out of nowhere, carrying gold and silver to huge gains.

It motivated me to get back in the game.

For almost as long, I've been reading Ted Butler's missives about how "someday" silver would break the chains of suppression, market indifference, and compelling supply/demand metrics and make a massive historic move to the upside never to be undone or repeated.

I've worked for a long time with "The Silver Guru" David Morgan, learning a lot from him about markets in general and silver in particular as I toured mines, wrote reports for The Morgan Report and presented at North American conferences.

And we have both been exponents of LODE, a project constructing a digital (silver and gold-backed) money of the future, enabled by the blockchain.

For several decades, both David and Mexico's Hugo Salinas Price (via the latter's proposed silver Libertad coin) have sought some way of returning silver to the world for wealth preservation and "honest money" for everyone – roles that for millennia it has faithfully served.

Recently, I've come to the conclusion that we're getting awfully close to the day – after all these years – when the price of silver is about to Cross its Rubicon.

Why am I so optimistic about silver right now?

Ted's most recent interview about the change in J.P. Morgan's status from the biggest short on the COMEX to perhaps its largest long…

…seeing silver being mined at just a 9:1 ratio to gold as mill head grades dropped 60% in the last decade…

…watching the effects of unprecedented financial mismanagement worldwide exacerbated by COVID; and seeing a flood of money from investors large and small pour into both metals, whether prices rise OR fall... the list is almost endless. 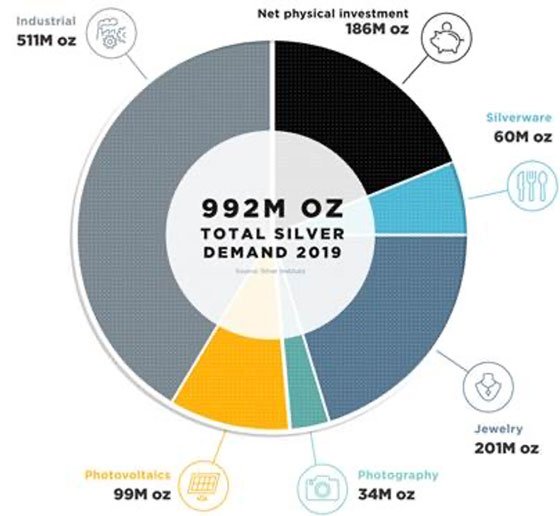 Something (other than a price rise) happened recently to Bitcoin. It's been estimated that the electronic "mining" of new Bitcoin results in the addition of about 900 coins per day.

As you've heard, "the program" dictates that there can never be more than 21 million bitcoins – several million of which have already been lost.

Along with the explosive popularity of blockchain applications in general, it's estimated that Square and PayPal alone have acquired the equivalent of all BTC mined this year.

Once the Rubicon is crossed, there is no turning back.

When I bought some Bitcoin a few years ago at $235 apiece and watched it drop to $180 soon thereafter, I didn't think it would rise 90x.

Yes, Bitcoin could have and might yet "drop to zero" like some naysayers still claim. Even if it had, I would not have lost too much because of the incredibly skewed risk-reward nature of the bet... something that wager has in common with silver.

Unlike Bitcoin, silver has been the trusted money of last resort across cultures for thousands of years. And it has not, nor will it ever likely go to zero!

In my studied opinion, the case for a price explosion to the upside has never been more compelling, nor dare I say, felt more imminent. Whether it launches very soon, or sometime in 2021, its day of reckoning is relentlessly bearing down.

The pressure building under silver is like the tremors that shook Mt. St. Helens before the pyroclastic explosion which tore out the side of the mountain and buried several states under white ash. Even today the surrounding landscape has not "returned to normal."

Are you willing to take the other side of this bet by passing on the opportunity to acquire some "hold in your hand silver"?

When it "crosses the Rubicon" there will be no turning back. It will be a one-time historic event. The price and supply terrain will fundamentally transform for a long time to come. Because when that day arrives, the die will have been cast. There will be no Second Chance.

On which side of the stream will you be standing?