An interesting dichotomy has developed in the "silver market". What does it mean? Does it mean anything at all? We'll know soon enough, I guess.

What an interesting year this has been, and the last six months have been positively brutal. While we await the eventual central bank pivot back toward easing and QE, COMEX digital gold and silver have been whacked, cracked, and shellacked. But as we've seen multiple times in the past, this has led to a widening gap between the futures price and the physical price.

There's a lot going on behind the scenes in the commodity markets. For example, crude oil demand should be falling with the global economic slowdown. However, crude oil supply is also falling, save for the shortsighted U.S. policy of draining its "strategic reserves". And have you noticed the dwindling stockpiles of copper, not only in London but in China, in part due to the unwinding of loans and credit where copper was used as collateral?

But let's focus today on silver, as it's of the greatest interest to all of us precious metal stackers. Most know that the price of silver that's prominently featured in financial media is the price "discovered" on futures exchanges like COMEX. As with anything else, this price is often dependent upon supply and demand—in this case, the supply and demand of the futures contracts themselves.

What's interesting is that the current supply of futures contracts is at a nine-year low. On COMEX as of last Monday, the total open interest in silver was just 125,748 contracts. At 5,000 digital ounces per contract, this represents 628,740,000 of "silver", and this is the lowest total open interest level since November 11, 2013.

Stated another way, total open interest in COMEX Digital Silver has fallen by 48.6% since the all-time highs two and a half years ago.

Now, again, maybe this is no big deal. Perhaps this simply reflects the notion that nobody cares or is interested in trading silver futures at present. But how do you square the declining interest in digital silver with what appears to be increasing interest in physical silver? And I'm not talking about simple retail demand here, even though dealer premiums for many popular investment options are now over $5/oz and sometimes approaching $10/oz.

Instead, check the global vaults. Let's start in London, where the LBMA is showing consistently declining inventories. See this: https://www.lbma.org.uk/prices-and-data/london-vault-holdings-data 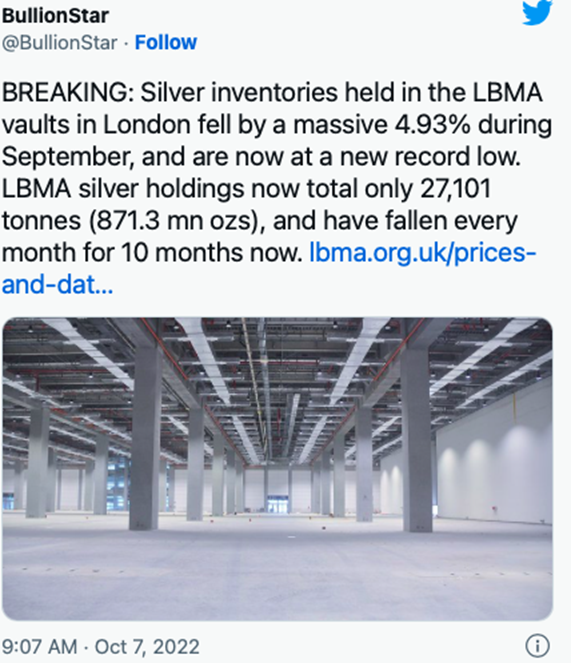 But of those 27,101 metric tonnes in the LBMA vaults, about 18,000 tonnes are the property of various silver ETFs. So, as James Anderson points out, the entire LBMA "float" is now under 10,000 metric tonnes. 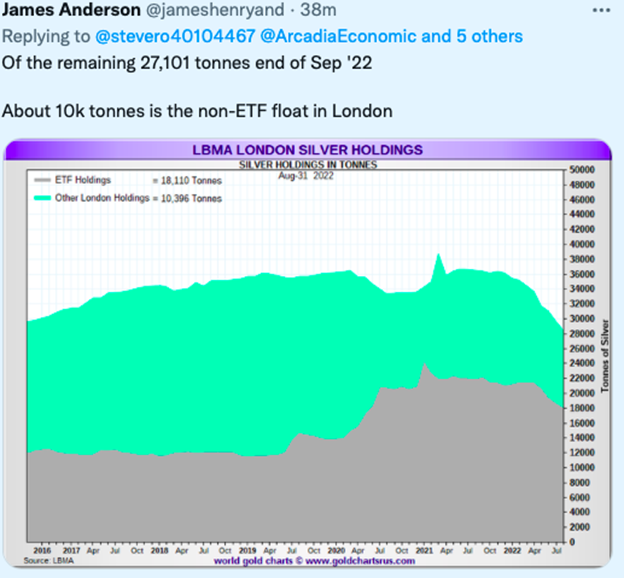 Again, 10,000 metric tonnes may sound like a lot...but it's not. It's "only” about 320,000,000 ounces. Note that 320,000,000 ounces is almost exactly what the CME Group alleges is in the COMEX vaults. And the COMEX was NEVER, EVER supposed to be used as a physical delivery platform. It was designed as a New York futures exchange. Actual physical delivery was ALWAYS supposed to remain in London. 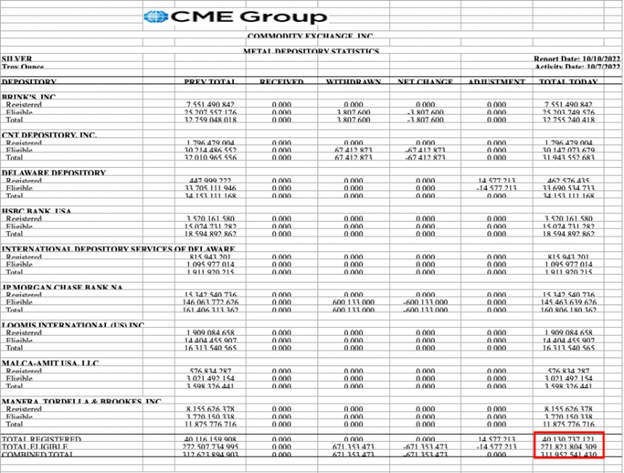 But wait a second, maybe we should take a look at those COMEX inventories too. There's a guy on Twitter who follows the daily vault levels very closely, and look at what he has noticed as of late... 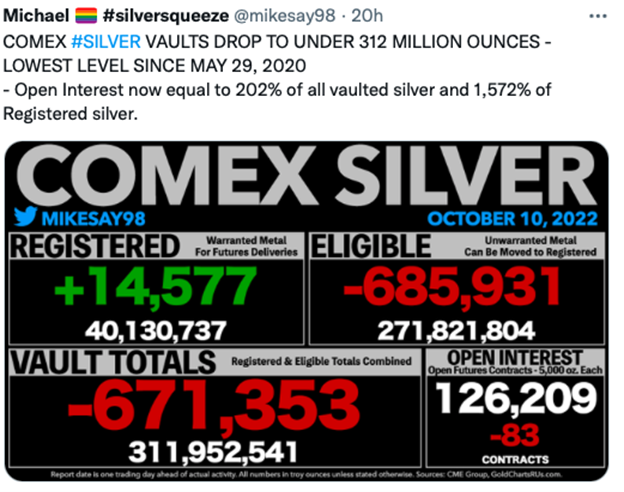 Once you put all of the recent delivery and physical demand together, you get the handy little chart below—also from that same Michael guy on Twitter: 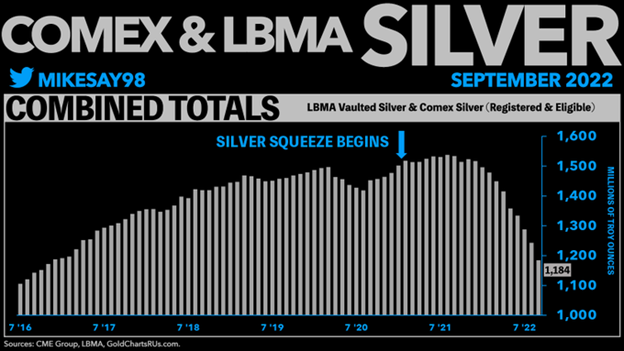 Hmmmm... So what do we have here? Could global, physical commodity demand be driving a shortage and shortfall of the metal that underpins the digital price? Could we finally be seeing the first stages of the destruction of the digital derivative and fractional pricing scheme that has held since 1975?

So keep an eye on these digital and physical trends as we move through Q4. And do not let off the gas. Let's keep #SilverSqueeze going and do our part to drain physical metal from the Banks and their vaults. For only when this current pricing scheme collapses will we finally discover the true and accurate price for physical silver.