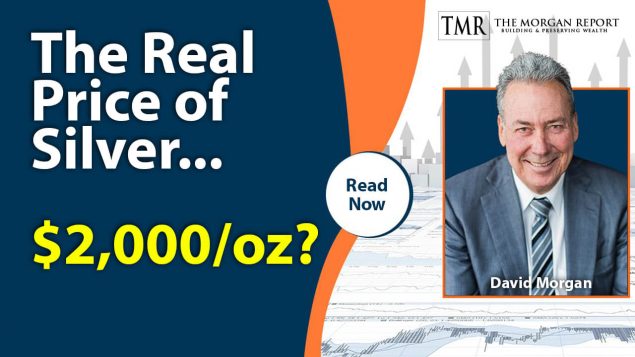 If their money had no value, silver would.

The silver market, like other commodities such as soybean and cotton, are all derivatives. The price settlement mechanisms for these is a contract. For example, thousands of theoretical silver ounces are traded daily. While only one percent of physical silver is brought to market through Comex settlement. This — 1% of the trades applies throughout the entire commodity sector.

The other, 99% of the time settlement is in currency (fiat fictions) on that contract, which is why silver isn’t thriving in a fiat money system. Think about it, if 99% of the time silver was in name only and you only had to make good one out of a hundred times, how much control would you have over a market?

So, where is the true price discovery of derivative contracts such as silver?

It can be determined as long as silver is obtainable, people are willing to pay large premiums over the spot price for certain silver coins, such as The Silver Eagle.

Retail silver has a huge premium. In other words, if everyone bought through retail, and 1000-ounce bars weren’t sold and were instead converted to a retail product, then the retail market would set the price for silver. This is currently not the case, but the retail market is getting stronger. As a matter of fact, when The Silver Eagle program started, they could barely sell 10 million ounces of silver annually and now, they are selling over 40 million ounces of silver.

If silver eagles were available through the banking system in the United States the demand could easily be ten times greater. Imagine being able to exchange fiat currency into real money at the bank- what a concept.

Where is the public getting their silver as more people buy and stack?

First, technology has changed for mining, allowing for a much larger quantity to be mined. In the 70’s and for decades earlier, the maximum amount of silver mined was 350 million ounces per year. In the 2000´s, this quantity increased to 550 million ounces and today, this amount is set to 850 million ounces. This equates to a 300 million ounce increase on an annual basis since the early 2000´s.

Next, there is always silver being sold often reluctantly. For example, some people simply lose their jobs and have no choice but to sell their silver to make ends meet. Or a silver stacker passes away and the family sells to settle the estate.

Finally, the Indian population saved silver for centuries. The spare money of citizens wasn’t in the bank, it was in silver, primarily jewelry. The rupee price for silver was at an all time high in 2020 due to difficult circumstances such as COVID, loss of employment, crop failure and more. Indians were motivated by the high price and/or economic conditions to sell their silver savings. There was a lot of divestment of silver in India that is extremely significant but not widely discussed.

How does money supply influence gold and silver?

You can determine what gold is worth in paper dollars by dividing the M0 the base money supply (outstanding currency) by the amount of gold ($/oz gold). In the 1980’s, there was a massive spike in gold to $850 in order to meet the money supply and during this time silver also spiked to $49 per ounce. When silver is valued as money, its price can be determined by calculating one sixteenth of the price of gold. If the same mathematical formula is used with today’s base money supply and treasury’s 265 million ounces, the price of gold is estimated at 15k per ounce. Additionally, if the 15:1 gold to silver ratio is used, then the price of silver is estimated at 1k per ounce.

This depicts how undervalued silver is based on the amount of money that’s been printed. I’m not suggesting that this should be the price of silver, but I do believe that we are headed in that direction as more people are buying silver daily.

A trend continues until it stops; that trend is the petro-dollar.

50 years ago, Saudi Arabia agreed all oil purchases had to be done in the U.S. “dollar”. This moved the Saudi’s away from gold and also moved the excess fiat into the purchase ofUS bonds. In exchange for this arrangement the Saudi’s were guaranteed military protection, which gave rise to the petro dollar.

Saudi Arabia recently made a military pact with a new superpower: Russia. What does this mean for the US dollar? If the original military contract is now broken, then the petrodollar is no longer valid as the world renowned currency. Therefore, there is going to be a shift into a new system. We don’t know what this will look like, although I believe the money powers must have a central bank digital currency planned. Furthermore, this change will be subtle and the dollar will remain strong relative to other currencies for quite some time. However, I am certain that the trend has changed and it could be huge for the commodity sector and the precious metals.

More potential evidence that silver is on the rise…

Data collected on the trading trends of silver in the past 40 years has yielded a nearly perfect cup and handle formation when charted. History has shown that the longer it takes to create a cup, then the greater the potential.

For instance, a triathlete with a longer base (time spent training) will have a better race because they’ve taken a lot of effort over time to build a foundation. Similarly, once the handle portion of the chart begins to rise, there is usually a tipping point; the trend is known to either fail or continue. However, with a massive 40 year base, what do you think is going to happen with silver?

Silver’s highest and best use is money…

Silver’s use as currency dates back to biblical times and it continued to be used this way for thousands of years. It was successfully used as payment for labour because the value of silver was in line with labour.

However, if it were used today to pay for wages, more than the annual silver supply would be depleted in just one day. This was determined by using data from the 2019 census and some basic arithmetic.

In the 2019 census, there were 157 million workers in the US. The average work day was 8.8 hours and $26 was the average wage. This adds up to 1.2 billion man hours per day while the annual silver supply is 1 billion ounces. This is significant because the average wage ($26) was roughly the price of one ounce of silver Oct. 2021), which depicts why the silver supply would be wiped out if it were used only to pay wages.

This means, we would need approximately 8 oz of silver to pay for a day of work for each member in the labour force. On the contrary, 1/10 oz of silver was earned for a day’s work in Ancient Rome. If silver had the same value now (not price), as it did in Ancient Rome, then 8oz of silver would be equivalent to 80 working days. If we do the math using the 80 day factor and silver’s recent average price, we’re looking at $2,000 silver.

I’m not suggesting that silver should cost $2,000 an ounce now, but this is what the value used to be when silver ONLY use was money!

“Those who don’t see the light will feel the heat”. Not only is silver known to be the world’s best conductor of heat and reflector of light, but it’s always been valued the most when used as a currency. With a new potential money system on the horizon, we should be taking a closer look at the silver market.

I discussed all these topics and more in my recent discussion with Bo Polny. You can watch the full video here.

David Morgan a big-picture thinker, his main focus is—educating people about honest money and the benefits of a sound financial system. His ideas can be seen in the movie Four Horsemen.

As publisher of The Morgan Report, he has appeared on CNBC, Fox Business, and BNN. He has been interviewed by The Wall Street Journal, Futures Magazine, The Gold Report and numerous other publications.