SILVER GREEN ALERT - ONE OF THE BEST BUYING OPPORTUNITIES FOR YEARS...

There will be no equivocating, fence sitting or any kind of hedging or expression of doubt in what is written in this update. Let me be absolutely clear: - we are now at the threshold of a barnburner rally in the Precious Metals sector, and silver is set to scream higher driven by a massive short covering panic, because short positions in it have ballooned in recent weeks to levels way above what we saw in December 2015, when silver hit its final bearmarket bottom, before the big sector rally during the 1st half of 2016.

We have been on to this for some time, hence the rash of articles over the past couple of weeks on the site recommending various good looking gold and silver stocks, and we will look at more this weekend. This is truly a massive opportunity, but these low prices are not going to be around for much longer. So if you want to fully partake of this rally and buy at the current crazy cheap prices, and haven’t done so yet, you had better pull your finger out and get on with it, because this market is not going to wait on your convenience. Don’t be fooled into thinking that because silver has rallied towards still bearishly aligned moving averages over the past week or so that it must drop back towards its lows again. That huge candle early this month on big volume which we can see on the 6-month chart below was a final capitulation reversal candle – a bottom. While the price has since been edging higher, the COT has continued to improve to the point that it is even more extremely bullish, so we can expect this so far hesitant rally to gain serious traction soon. Even if we do see a dip, which is considered highly unlikely, it would simply make the picture even more positive, although it is now scarcely possible that it can look much more positive than it is already. 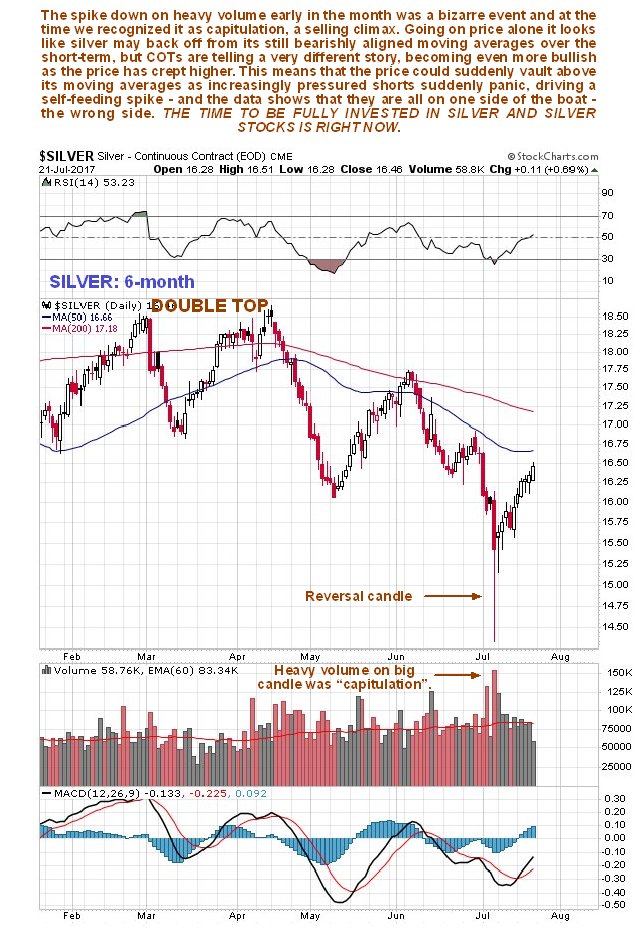 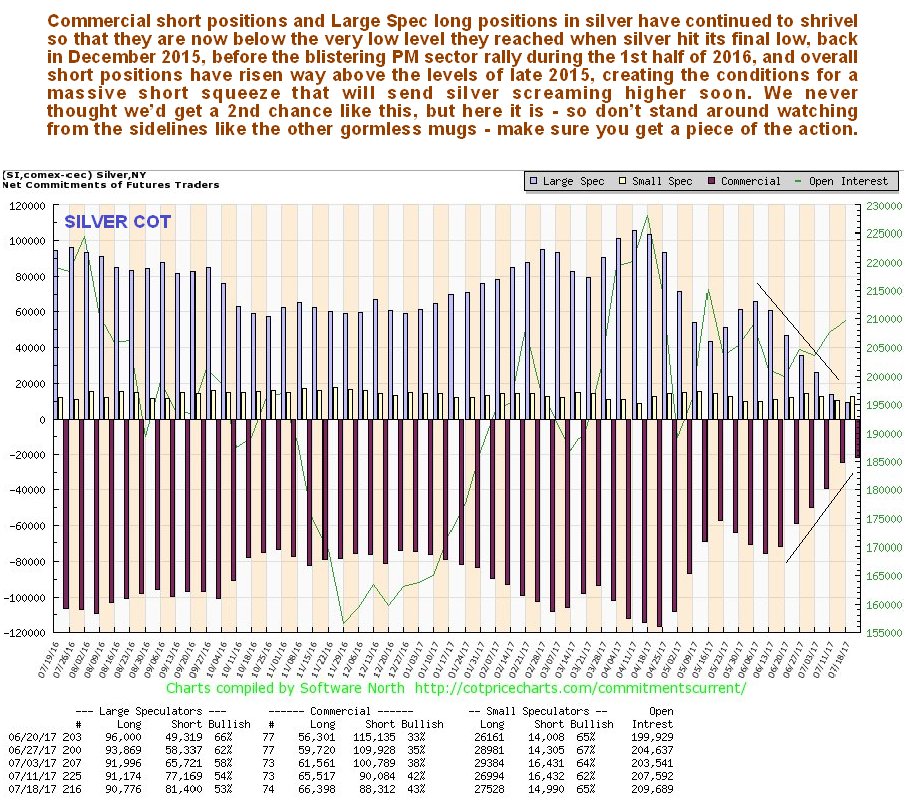 The latest silver COT chart shows that Commercial short and Large Spec long positions have fallen even further over the past week, despite the price having risen somewhat. These are now at even lower levels than we saw at the December 2015 bottom. Gold’s are about the same as last week and very bullish too, and for good measure we are just entering the most bullish time of year for the Precious Metals. So there it is – a massive opportunity staring you in the face, of the sort we haven’t seen since late 2015, and before that for many years. Look out for more stock write-ups over the weekend. Remember that most stocks in the sector are like sheep – they all move together, that’s why when we buy them, we storm in and buy across the board if we see a major opportunity present itself, as it’s doing right now, since there’s no point in chasing them higher if we don’t have to.