The Silver Market is going to experience a big reversal when the Hedge Funds and Institutional investors rotate out of highly inflated stocks and into precious metals investments.  This is not a matter of if, it’s a matter of when.  And the when, could be much sooner than we expect due to the huge problems with the U.S. debt ceiling deadline on March 15, 2017.

As I mentioned in my previous article, POWERFUL GOLD & SILVER COILED SPRINGS: Important Charts You Have To See, I posted this chart of the 2,000 point drop in the Dow Jones early in 2016 versus a huge spike up in gold and silver:

At the beginning of 2016, the Dow Jones Index fell to a low at 15,600 level, 5,000+ points lower than what it is trading currently,while the gold and silver price surged higher.  The fundamentals of the Dow Jones Index is more rotten than ever.  Wolf Richter wrote about this in his article, Dow Companies Report Worst Revenues since 2010, Dow Rises To 20,000 (LOL).

Furthermore, the Dow Jones Index is seriously overdue for a correction:

According to the economic contraction cycle that occurs about every six years, the Dow Jones Index is severely overdue for a good ‘ole fashion beating.  If we assume that a normal correction for the Dow Jones would be for it to fall to about 8,000 points, the index is overvalued by at least 60%.   And that is just for starters.

So, when the Dow Jones Index and the broader stock markets finally crack, we are going to finally see Hedge Funds and Institutional investors rotate out of the majority of highly inflated stocks and into the precious metals and mining sector.  This will have a profound impact on the price of gold and silver as well as their mining companies share prices.

To get an idea how this will impact the Primary Silver Mining sector, I compared it to the largest U.S. oil company in country, ExxonMobil.  ExxonMobil is listed on the Dow Jones Index as one of 30 industrial stocks and has the highest market cap of all the energy companies in the United States.

What Will The Impact Be When Hedge Funds & Institutional Investors Move Into The Silver Market?

According to Michael Belkin of the Belkin Report, he put out a buy signal on his top Primary Silver mining companies during an interview on King World News last month.   Now, Michael was one of the few who made a call back at the end of 2015 advising his clients (and those who subscribe to his new gold stock newsletter) to get into the gold mining sector.  And at the beginning of the year, the price of gold and the gold shares shot up considerably.  Then a month later, he made a call advising his clients to get into his group of Primary Silver mining stocks.  Over the next several months, the Dow Jones Index crashed while the price of silver and the silver stocks surged higher.

Belkin, who has large institutional clients is now advising them to get out of the most of the broader market stocks and into other assets such as the precious metals, especially the silver stocks.  He is one of the few analysts that I respect as he does not get paid by the mining companies to promote their stocks.  He suggests certain stocks through his own analysis and models.  Belkin believes the broader markets are going to finally correct BIG TIME this year and that one of the few sectors to move into will be the precious metals. 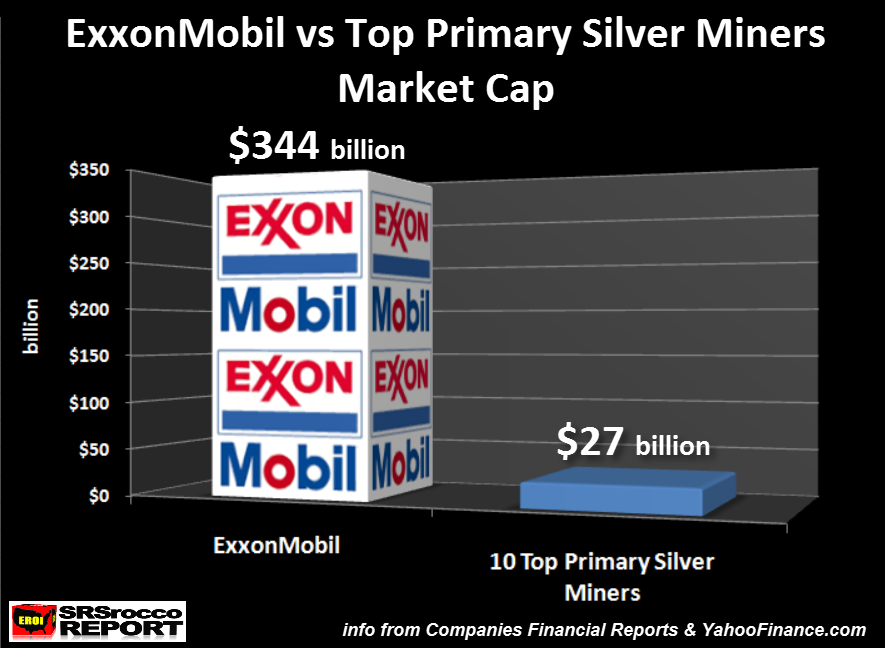 Actually, half of the total market cap of the group was from Fresnillo PLC which is $13 billion.  This means, ExxonMobil’s market cap is nearly 13 times greater than the total of the top primary silver mining companies in the world.

NOTE:  There are other large silver producing companies in the world such as Hochschild out of Peru.  However, I wanted to focus on the largest (Fresnillo) and those mainly trading on the U.S. exchanges.

Next, lets compare the total outstanding shares between ExxonMobil and these top primary silver miners:

So, how do the stock prices of these two compare to each other?  When I put together these charts last week, ExxonMobil’s share price was $82.90 versus an average $10.90 a share for the top ten primary silver miners: 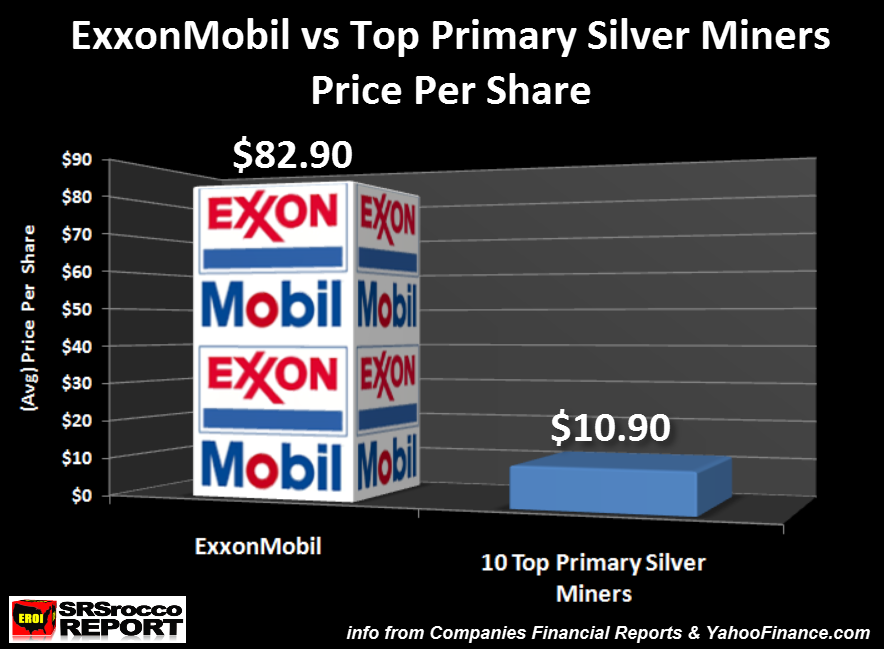 With the oil and silver price lower this week, these figures shown above are lower, but still reflect about the same ratio.  Regardless, the top primary silver miners average share price for the group is about eight times less than ExxonMobil.  However, the interesting thing to understand is that any significant amount of funds flowing into the primary silver miners will cause their share prices to move up a lot higher and faster than ExxonMobil.

If the market cap of each doubled, this would be the result on their share prices: 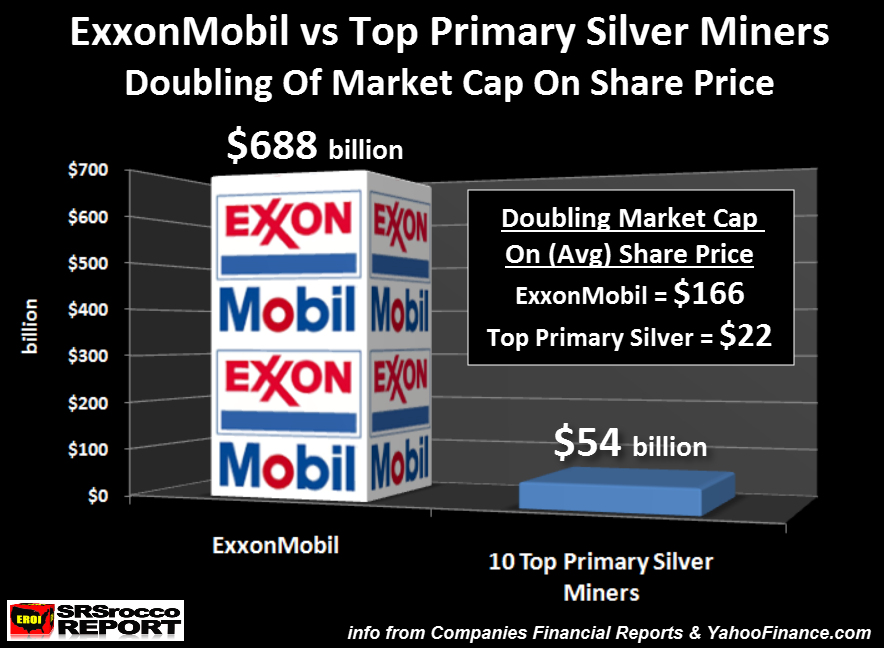 Furthermore, a weakening economy and falling Dow Jones Index would likely result in lower oil prices.  This will be bad news for ExxonMobil and the energy sector shares. 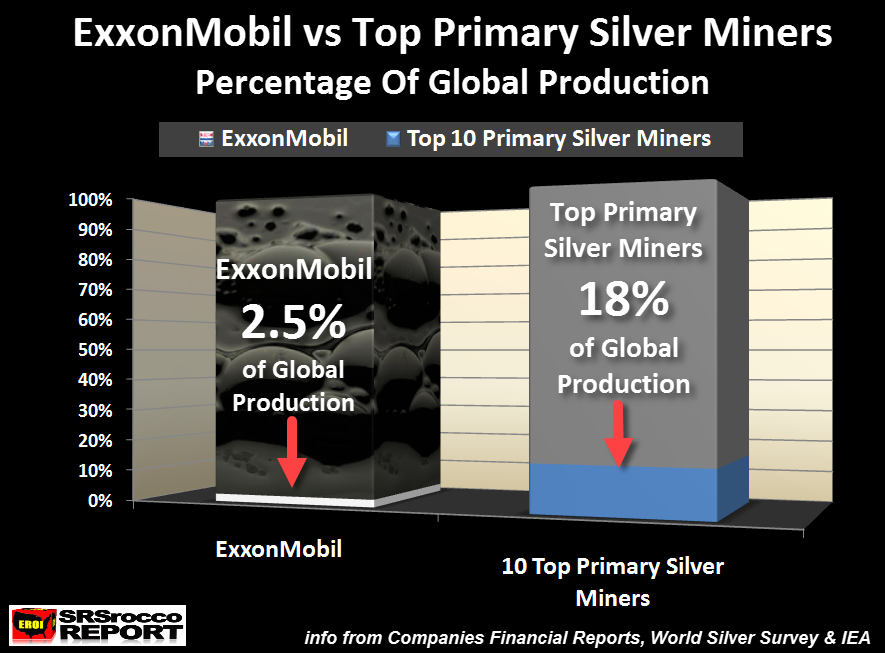 As we can see in the chart above, ExxonMobil’s portion of total world liquid oil production is that tiny sliver of white at the bottom of the bar graph.  However, these top 10 primary silver mining companies produced 18% of total global silver mine supply last year.

Yes, it is true that the value of liquid petroleum that ExxonMobil produced last year was much higher than the total value of silver produced by these top ten primary silver mines… but guess what???  All that oil has been either burned or consumed by the market, while a good portion of that silver was acquired by investors or is used as jewelry or silverware that could be brought back into the market as a high quality STORE OF VALUE.

While oil is strategically important to our modern society, it is nothing more than a mere commodity, burned and consumed.  Gone forever.  On the other hand, while silver does act as a commodity due to its industrial uses, a large portion of its demand is based on investment demand.  Which means, silver still functions as a store of wealth… just like it did 2,000+ years ago.

When the markets finally crack and the Dow Jones Index falls off a cliff, Hedge Funds and Institutional investors will move into the precious metals with even more leverage and a greater amount of funds than what took place during the beginning of 2016.  Of course, the Fed and Central Banks could postpone the market correction for a while, but the longer they do so, the harder and faster the inevitable decline.

I believe Michael Belkin’s analysis is correct that there will be few decent stocks or sectors to move into when the highly inflated markets finally tank.  Thus, when BIG MONEY moves in the silver market, it will cause the silver price and the silver mining shares to surge.  How high will be anyone’s guess.

Lastly, I wanted to compare some of the top U.S. oil and gas producers market cap versus the same ten primary silver mining companies: 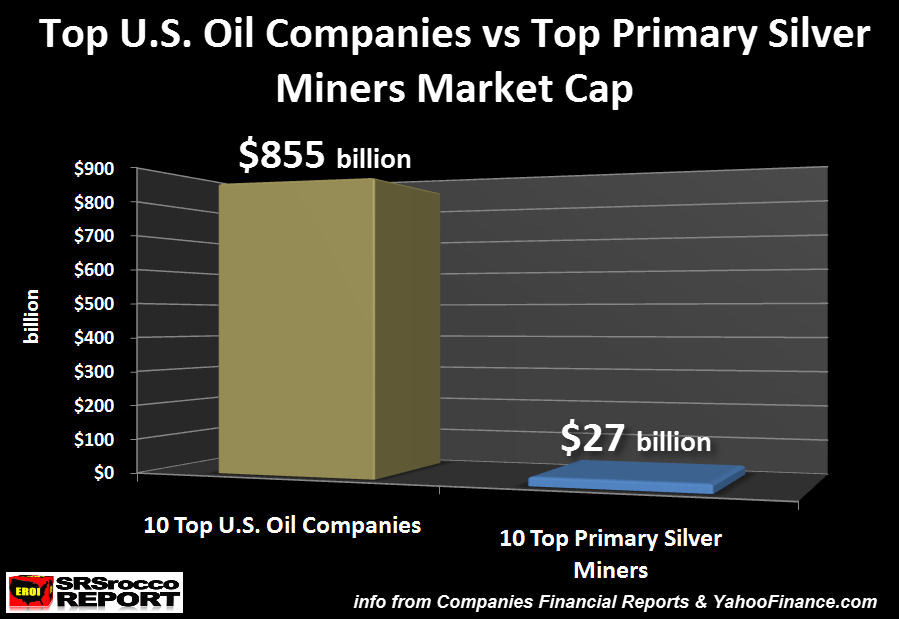 In the future when demand for physical silver overwhelms supply, investors will move into the next best thing... the primary silver mining shares.  Because there are so few primary silver miners, any significant amount of funds moving into this sector could reach insane levels never imagined today.