The way you see silver now depends on whether you see a glass that is half empty or half full. If you are a pessimist by nature you will be grumbling about its underperformance relative to gold up to this point, but if you are an optimist, as we certainly are with regards to silver, you will see it as maintaining the opportunity to pick it up cheap before it really takes off higher in a big way, which as we will now proceed to see is a fast growing probability.

We have been wary of silver and silver investments in the recent past with good reason, because if another deflationary downwave hit, silver was in position to get really beaten back down into the dust, as we can see on its latest 6-month chart below. After being smashed in March when the stockmarket tanked it staged a recovery, but started looking decidedly timorous as it approached a zone of heavy resistance in April and its unfavorably aligned moving averages. It was set up to take another severe beating in the event of the stockmarket tipping into another downwave, especially as it has been forced gradually lower by its falling 50-day moving average over the past several weeks. But during this period the Fed has been creating money at a stupendous rate to throw at the credit markets and the stockmarkets to prop them up, and there appear to be no limits to how far they will go in pursuit of this objective. Needless to say this action is hugely inflationary in its implications and will lead eventually to hyperinflation, although it won’t start to kick in until the velocity of money increases, and we can expect gold and silver to anticipate this. Right now there is no velocity of money because the economy is dead, but we can expect them to keep pumping money until they get things moving. The ongoing money creation by the Fed is the reason that the stockmarket hasn’t tipped into another downwave, and the reason that gold has held up well in recent weeks. If it continues we can expect silver to take on the key resistance in the $16.50 area that it gapped below in March. If it should overcome it, it will change the trend from the current neutral 7 down to neutral, paving the way for a major uptrend to begin. 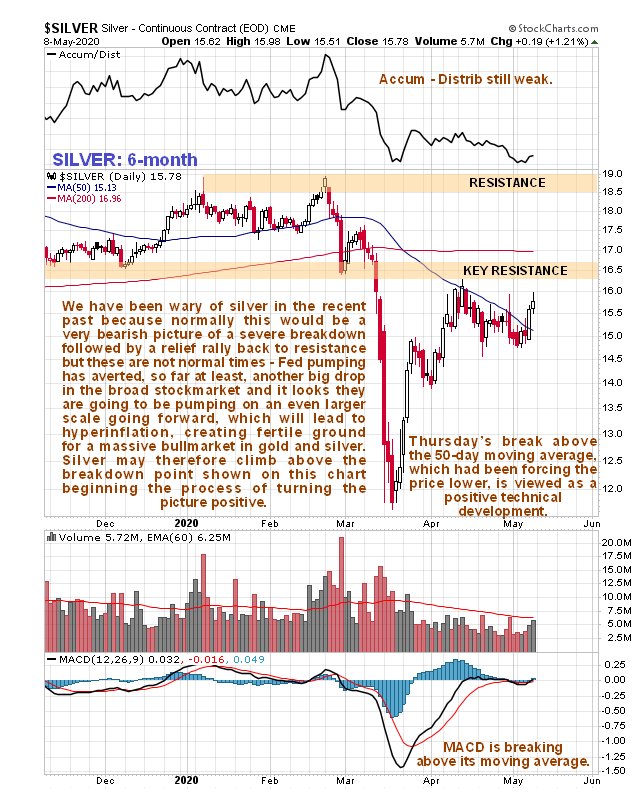 On the 2-year chart we can see why, at this juncture, we continue to have to classify the trend as neutral / down because of the quite strong resistance at the failed support in the $16.50 area and the still negatively aligned moving averages. A break above this resistance and the 200-day moving average just under $17.00 will improve the picture significantly 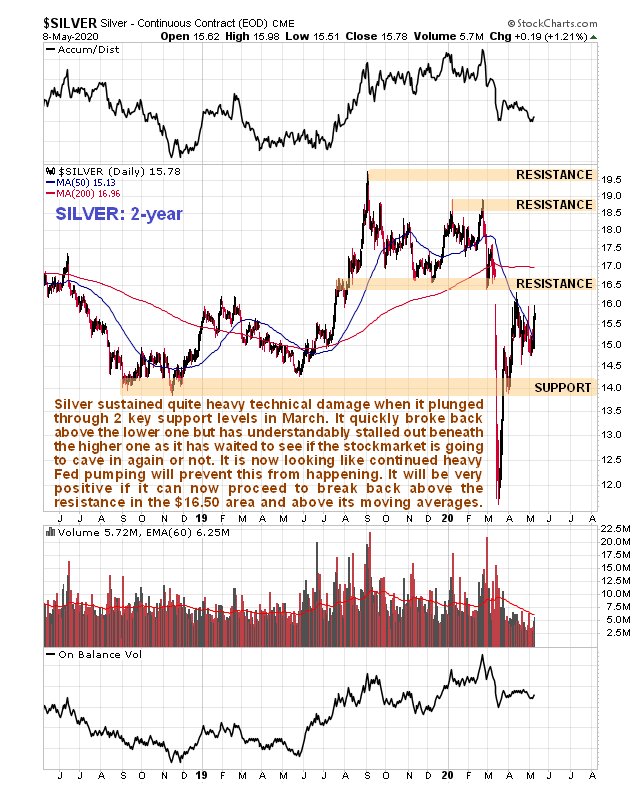 On the 13-year chart we can see how the breakdown in March caused by the stockmarket plunge broke silver down below the lows of a potential giant Double Bottom, and the fact that it has risen back into the pattern is positive, provided that it can hold recent gains and build on them. Volume indicators look positive relative to price, which is a good sign. 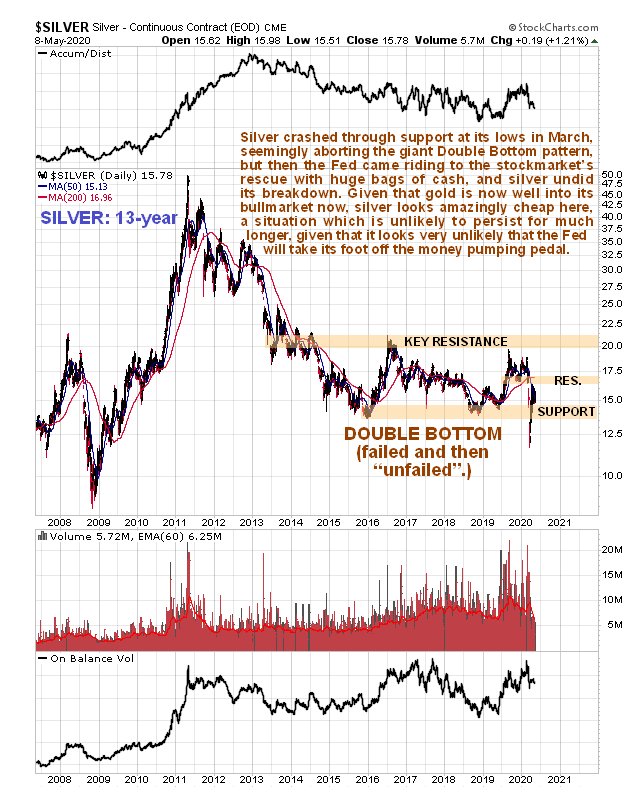 Silver’s latest COT looks much more positive than gold’s which rather suggests that we can look forward to silver outperforming gold for a change before too much longer. This chart certainly indicates that there is plenty of room for silver to advance from here. 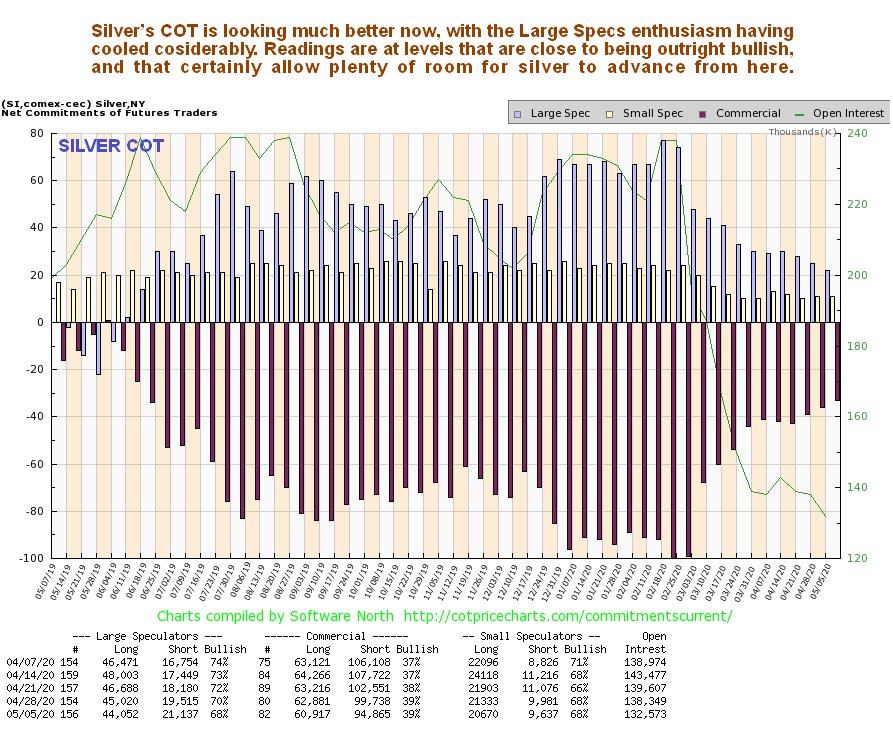 Just how undervalued silver is relative to gold is made dramatically clear by the 20-year chart for silver over gold shown below. Every time this ratio has dropped to a really low level it has led to a major sector bullmarket, but now it is much more extreme suggesting both that the looming bullmarket will be big and that it is likely to start soon… 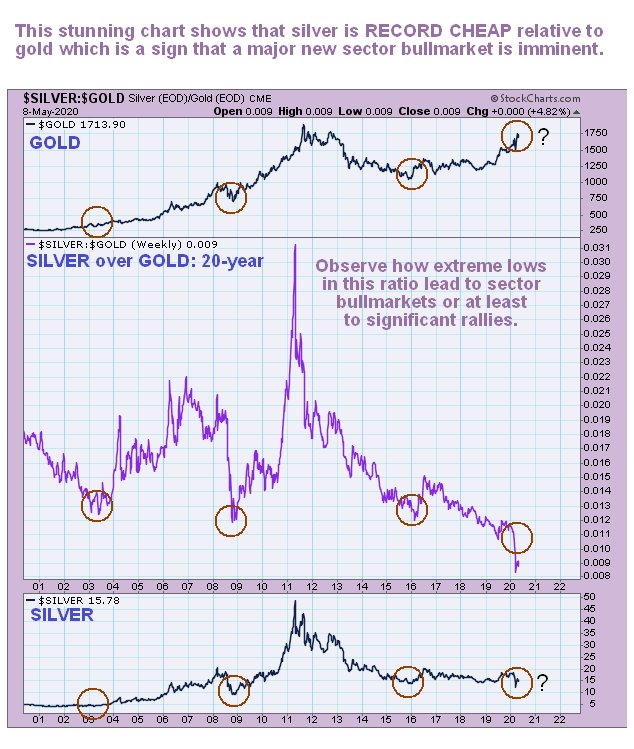 With respect to silver’s relatively rotten performance compared to gold in the recent past, this is a good point at which to draw your attention to an excellent article by Jeff Clark on the subject entitled Why is Silver Stagnant and When it Start Moving? I’m sure you will agree that this is most encouraging article for silver investors.In addition to silver being very cheap relative to gold, there is now a big difference between the paper price for silver and the physical price for silver, which, as with gold, is viewed as a very auspicious development. IT IS VERY IMPORTANT NOT TO LET THIS LARGE PREMIUM PUT YOU OFF BUYING PHYSICAL SILVER IF YOU ARE MINDED TO, because this premium is likely to get even bigger, and if silver starts to take off higher again, physical silver could very quickly become impossible to obtain. Use the cloak of recent weakness to get it on board as fast as you can Even if a worst case scenario eventuates and the stockmarket drops despite Fed pumping and silver drops back towards recent lows, so what? When the hyperinflation hits silver could easily end up at $100 or $200 an ounce, and maybe much higher, so why quibble about a possible $3 or $4 drop from here, which is any case is considered much less likely now?