A Special Message at Easter from the Precious Metals Sector...

Silver has been a dull market for the past couple of months, yet as we will see the pattern that has evolved in recent weeks is anything but bearish. On the 1-year chart we can really see what is going on. Back last December silver broke out of a fine Double Bottom formation and ran up quickly but the advance turned out to be modest and by late February it had fizzled out and it started reacting back again and last Monday made a new low. However, the rate of decline has been decelerating steadily and it is now apparent that a bullish Falling Wedge is completing, with the strong convergence of its boundaries making it all the more bullish. It is also viewed as no coincidence that the decline appears to have run its course with the Wedge closing up right at important support at the upper boundary of the Double Bottom base pattern. 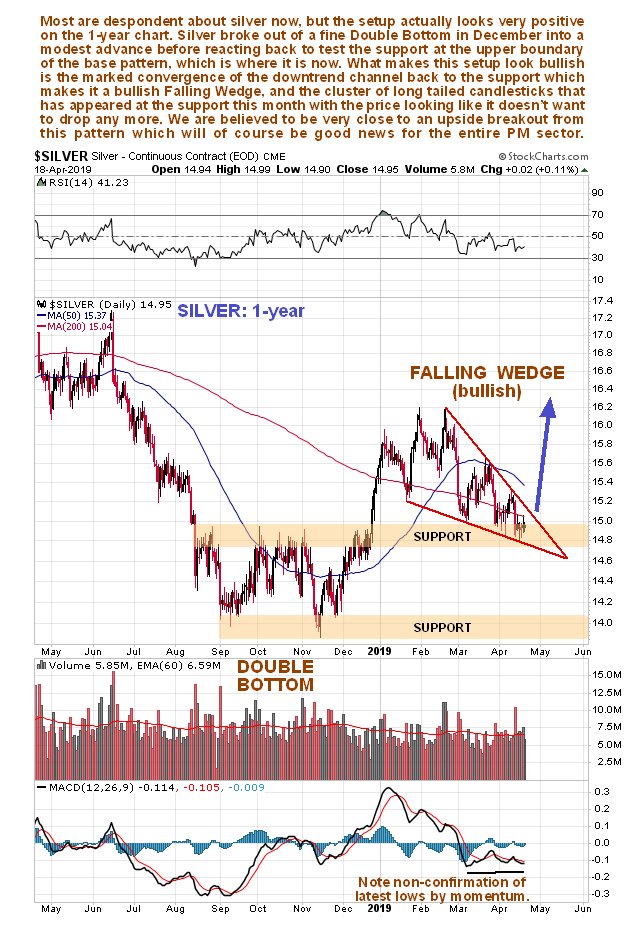 It is thus most interesting to observe a run of bullish long-tailed candles from the start of the month on the 3-month chart which is an indication that the market is rejecting lower prices. We were already on to this in the last Silver Market update, although at that point we hadn’t “clocked” the Falling Wedge pattern, and while it was a little surprising to see silver drop to new lows about a week ago after those positive candles, it wasn’t by much, didn’t drop the price out of the Wedge pattern and bullish long-tailed candles have appeared again in recent days. So silver is looking good for a sudden reversal to the upside here, involving a breakout from the Wedge. 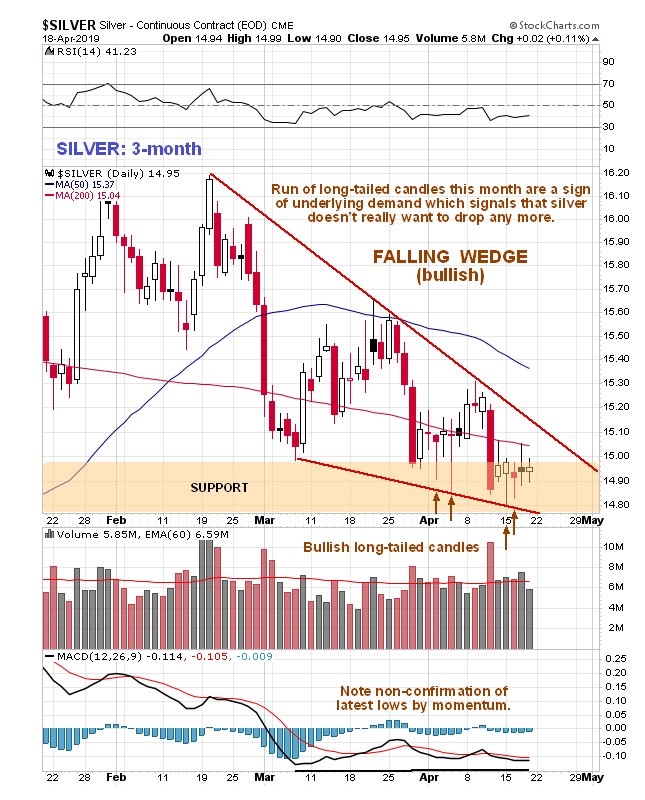 With the setup for silver now looking at its most healthy for a long time, what do the latest COTs have to tell us? You are invited to directly compare the latest COT chart for silver with its 1-year chart above, which is another reason a 1-year timeframe for one of the silver charts was selected. This is edge of the chair stuff for as we can see silver’s COT is at its most bullish since last November when the silver price was down making the 2nd low of its Double Bottom.There was a big drop in Commercials’ short positions last week and the Large Specs, who love to give up at the bottom, have thrown in the towel and legged it for the hills, which is just what we want to see before a rally. There is scope for some further improvement in the COTs, but with silver now bang on strong support and its Falling Wedge closing up fast it doesn’t look like its going to wait for that to happen before it takes off higher. 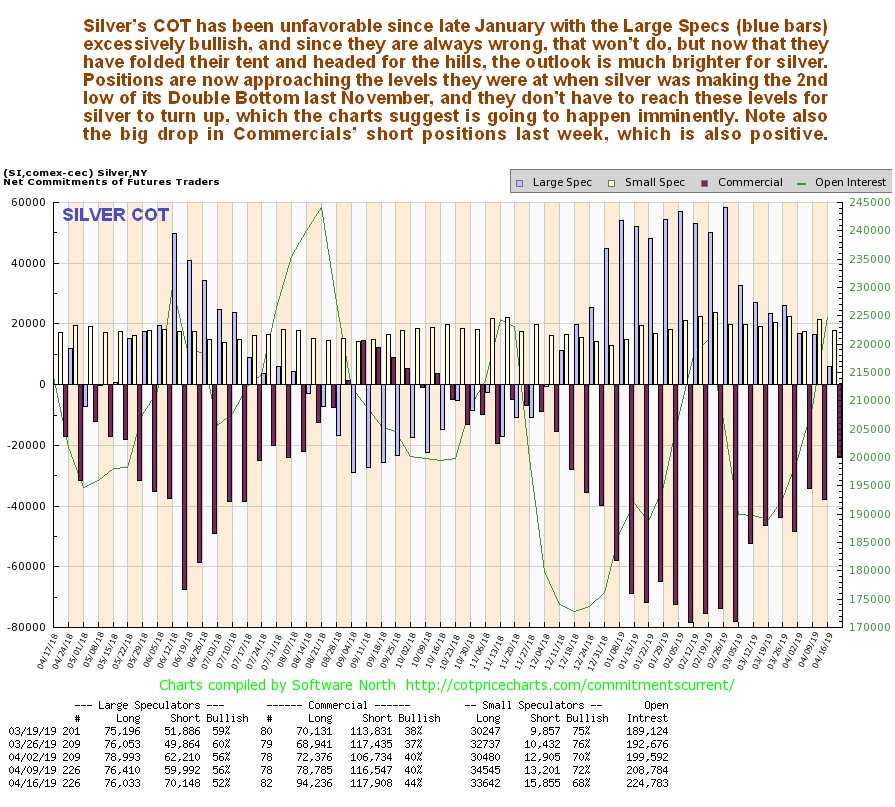 The practical conclusion to all this is that SILVER AND ALL THINGS SILVER ARE AN IMMEDIATE STRONG BUY HERE. 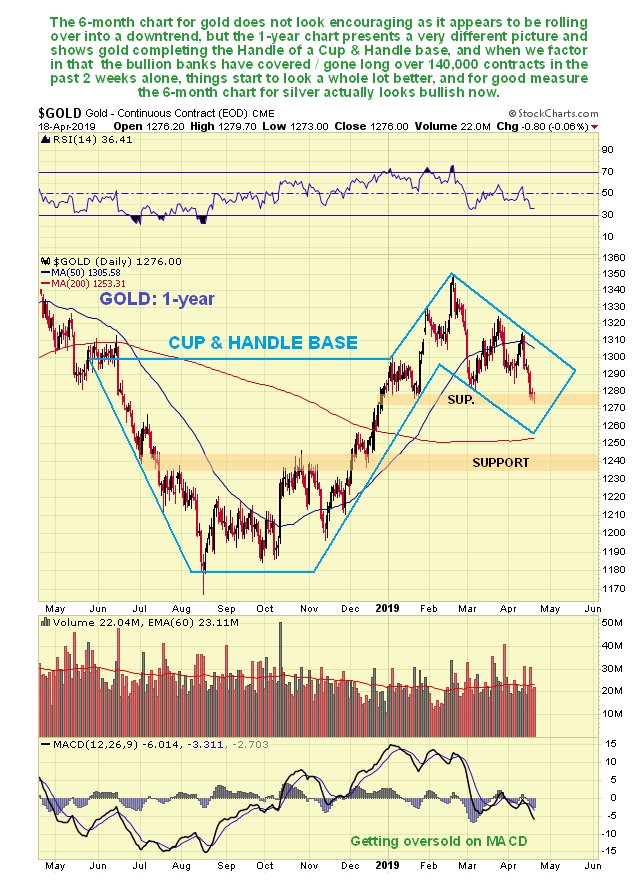 What do the latest COTs have to say about the outlook for gold? They show that there was a big improvement last week, with a marked reduction in Commercial short and Large Spec long positions and while we can see that there is still room for further improvement, it is not a requirement that positions have to fully unwind before an uptrend in gold starts. 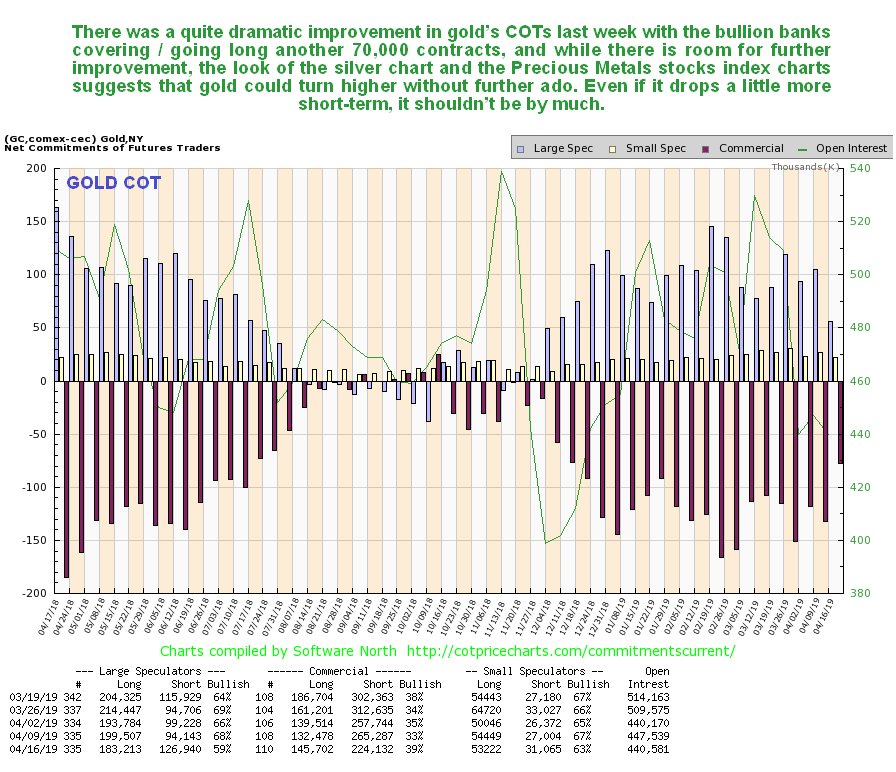 As my illustrious associate in Toronto puts it…

“Happy to report that the weekly Gold COT data just came out.

Gold was weaker AFTER the report. Meaning, 99% probability Banks covered/went long even MORE after the report.

As I have been saying for weeks as Gold was above $1300, best thing for Gold is to dip down one more time to scare more people off the wagon.”

Well, it has definitely done that.

The 1-year chart for GDX shows that the sector is continuing to advance within a fine parallel uptrend channel, with the metals’ reaction of recent weeks being the occasion for the sector to consolidate by traversing sideways within the uptrend channel. This consolidation / reaction within the channel has allowed time for the earlier overbought condition (MACD) to unwind and for the lower channel boundary to catch up with the price, thus creating the springboard for another significant upleg to develop from here. So this looks like an opportune buy spot for the PM sector here. 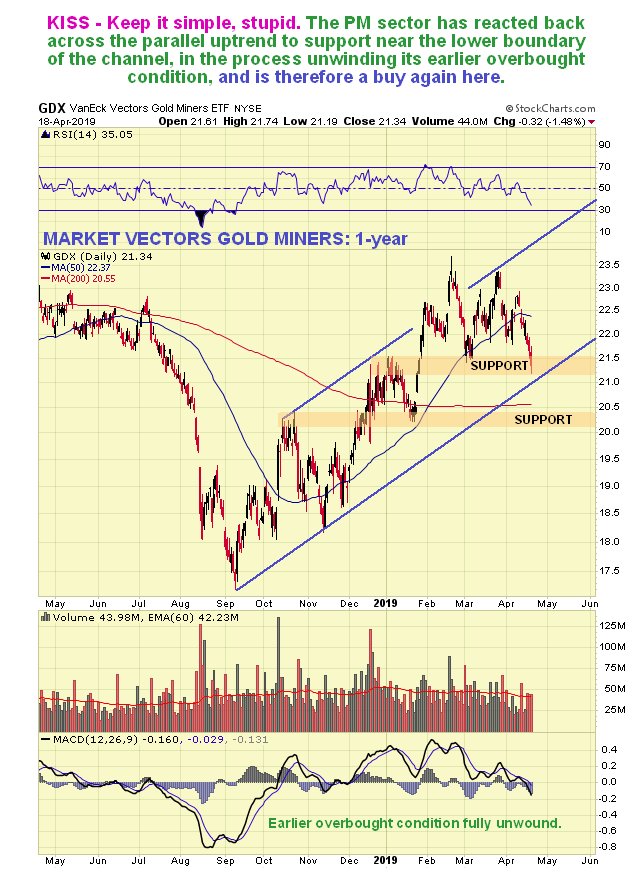 Can the Precious Metals sector advance if the broad stockmarket continues higher? Of course, because if the stockmarket continues to advance because of Central Bank buying on a grand scale to goose it higher, it means QE4 and eventual inflation /hyperinflation as we continue inexorably along the road already trodden by Venezuela and Zimbabwe.

The overall conclusion is that the Precious Metals sector is at or very close to an important bottom here and this is a good time to buy.