If you're still waiting to buy physical silver to start a stash, you're now playing financial Russian Roulette... with four rounds in the cylinder.

The chat rooms talk about buying silver and gold when they decline in price. "If silver goes down to 22, I'm all in!" "When these 'excessive' premiums drop a few dollars, I'm backing up the truck."

Believe it or not, buying on a price drop goes against human nature.

It is a bit strange, because if you go to the store and find your favorite grass-fed beef on sale, you'll probably see how much you can stuff in the freezer. But back to the metals.

Another big change, seemingly contradictory -- is that increasing numbers of well-studied investors are buying whether the price goes up or down, with retail supply getting continually whittled away.

Their sentiment seems not as heavily impacted as others, who remain fearful of declines, or -- as is still the case with most Americans -- are not yet aware of how quickly government-induced inflation is eating away at the value of their pensions and the greenbacks in their wallets.

During market turbulence, the news invariably causes a decline in sentiment, making it difficult even for those of us who've been in these markets for many years, to go ahead and buy.

One of the most important characteristics of an investor who succeeds long term over the majority who do not, is the ability to "Buy when others are selling and sell when others are buying."

It's like the habit of going to the gym. At some point it never gets any easier. No matter how strong your original motivation was, it still can be hard to push yourself out the door and keep at it.

To handle buying more silver when sentiment is negative -- like it is now -- simply go out, as Galactic Update's Stewart Thomson says, and "Buy less than is rational." How much is less important than keeping the habit.

This is where a periodic auto-buy setup works so well. The decision has previously made and, since it's automatic, less second-guessing gets in the way.

A decade ago, the premiums didn’t change much. Now there’s a different metric. When the price drops, people buy more.

Supplies dry up because silver miners are producing less and just as important, legitimate sellers -- who are not trying to gouge anybody -- raise premiums because they’re paying way more for supply. If they sell what they have for a silly paper price unreflective of market reality, then they have no product.

To make matters worse for the contrarian who’s waiting for a price drop, premiums rise to the point that their cost goes up even more than the drop in the physical price. For example, the going rate for American silver Eagles used to be about three bucks over a bullion coin of the same weight.

These days, an Eagle can set you back at least $10 over spot. So if you’re waiting for $22 silver (and, should it actually get there), you’ll pay $32 per coin for the privilege -- That's if you can find any.

Blame Canada. If you’re one of our unfortunate neighbors to the north, and you didn’t buy any silver some years ago when the Cando was trading at par with the US dollar, you now get to pay an extra 20% because of a much less favorable exchange rate.

A double-cost "premium" by a different name? Pardon our Canadian friends for having a hard time “backing up the truck” just now! 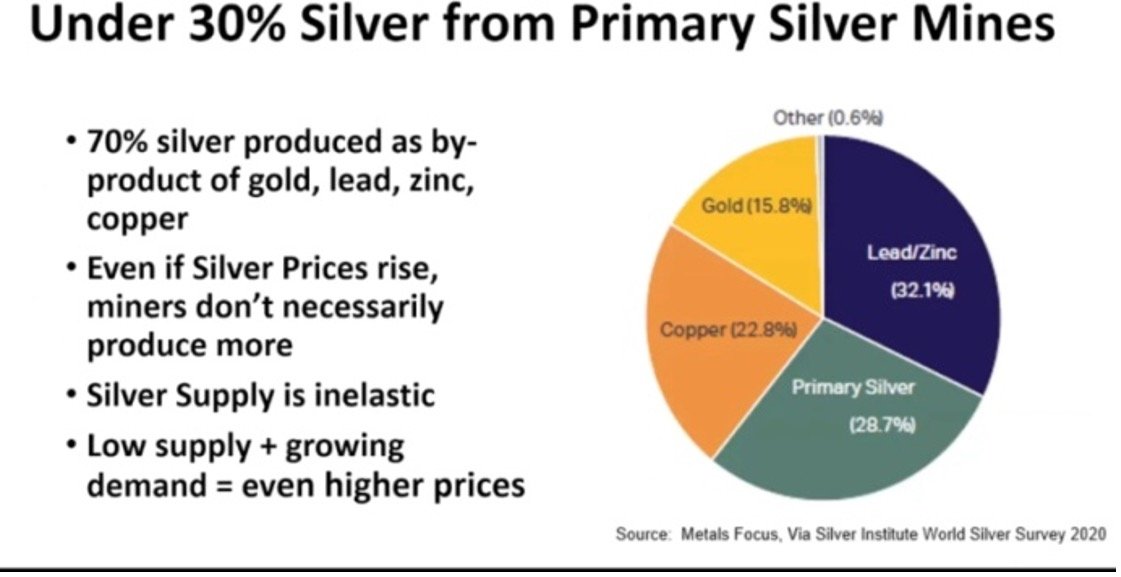 In the Old Days when the price dropped, you could simply go in and get what do you wanted, because people stopped buying and there was plenty around, in part due to global silver production running a surplus each year.

Yields at the relatively few primary silver miners have been dropping for over a decade, but the decline in total ounces produced just started showing up in the annual figures during the last few years.

2021 is likely to mark the fourth consecutive year in this pattern. Thus, a profoundly altered and systemic supply metric is now in play.

An Historic Anomaly. Tying all of this into a bow are two structural changes -- each "a first" for anyone now alive.

As mentioned above, we're well into a structural ongoing supply decline -- made worse because most silver used in modern applications is not recoverable, and is thus lost for reuse. The trickle of additional new silver production coming online is simply not going to change this anytime soon. Slammed against this drop is a sea wave of new demand from both investors and industry.

Like palladium, which went through the same supply demand alteration (deficit) on a smaller scale, the result before long is going to be an upside price explosion.

Also, whether or not you believe in "conspiracy theories," silver, unlike any other commodity on the board has, for the past few decades been massively "manipulated" by short sellers who push paper silver derivatives into the market in order to keep the true price well below where, all things considered, it should be.

In the process, they profit by the resulting volatility in both directions.

The distortion between price and value has been so out of kilter for so long that it's safe to say none of us really has a handle on what that price should be. Before long, we're likely to find out…

All in all, hanging around for “More affordable” silver prices doesn’t really make cents. It doesn’t make dollars either.