What the Heck Is Happening to Silver?!

As always, we want to look past the market price action. Two explanations are hot today. Let’s look at them first, before moving on to our unique analysis of the basis.

JP Morgan and Motte and Bailey

JP Morgan’s manipulation of gold and silver prices is the focus of discussion in the gold community again, as another criminal trial is now underway, this time the accused is the former head of precious metals trading at the bank (we have discussed the manipulation conspiracy theory here and here).

Central to this trial—and the previous one—is spoofing. Bloomberg describes spoofing as placing “orders that are quickly canceled before they can be executed -- to push precious metals up or down”. Unfortunately, many commentators in the gold community use this at the Motte in a Motte and Bailey Fallacy.

A Motte and what?!

It’s named after a medieval fortification. The Motte is strongly defensibly, but not a pleasant place to spend a lot of time. The Bailey is a better place, but not so defensible. 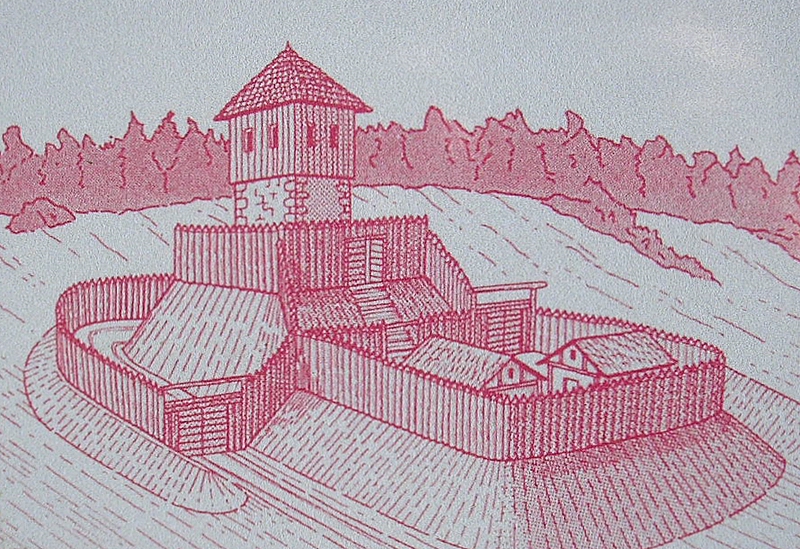 The Fallacy is like a bait-and-switch. The arguer starts with an uncontroversial statement. In this case, that JP Morgan traders were caught entering orders they intended to cancel. And since one can’t really dispute this, the arguer moves on to the important proposition. The Bailey is not defensible, but by the tactic of having just sold the Motte, the arguer hopes the Bailey will not need to be defended.

The Bailey is that the prices of gold and silver would be far higher, but for manipulation. Of course, spoofing has no long-term effect on prices. If it works at all (the whistleblower did not make much money as a trader for JP Morgan), it is because it momentarily distorts the price signal, and the trader can trick other market participants into paying too much or charging too little.

N.B. JP Morgan did spoofing in both directions.

You can’t get there, from here. You can’t convict the Godfather of murder by proving his grandson stole candy from the store. And you can’t argue gold would have been $50,000 decades ago, by proving JP Morgan traders entered orders they intended to cancel.

The other hot topic du jour is the Commitment of Traders Report. The conspiracy view holds that banks sell futures to suppress the price. According to this view, the greater the number of futures contracts outstanding, the more the price is suppressed. So, in this view, it’s notable that the number of open silver contracts is now near a multiyear low.

In the conspiracy theorists’ minds, this means that silver is ready to launch to much higher prices. This is almost right, but for the wrong reason.

In reality, open interest responds to the basis. A high and rising basis offers a profit to carry metal. To carry, a bank borrows dollars to buy metal and simultaneously sells a contract. The basis is the profit they can earn in this trade. Basis is (basically) future price – spot price (quoted as an annualized percentage rate).

The interest rate factors into this trade. So, in a changing interest rate environment, one can’t just look at the basis. One needs to consider interest as well. Fortunately, we have an indicator which does. The lease rate. Lease rate is (basically) LIBOR – basis. Here’s our graph of the silver lease rate. 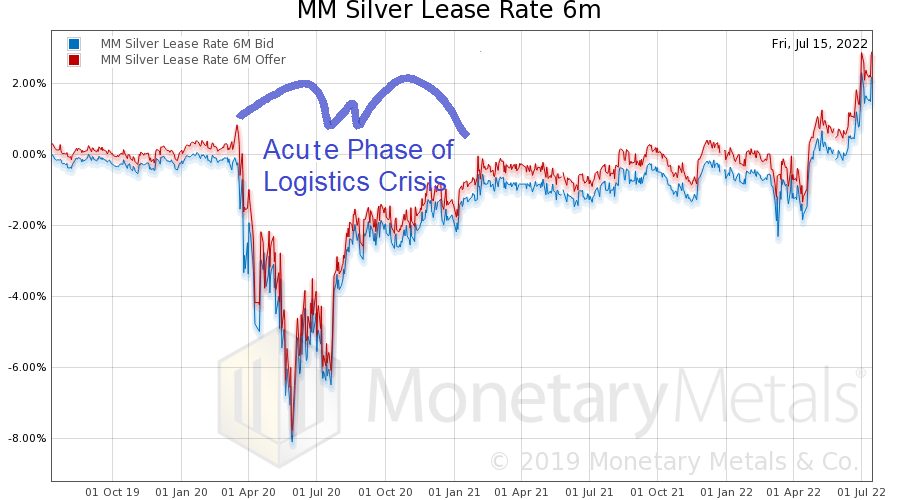 As we have written in the past, we ignore the period after the economy was slammed with Covid lockdown. Disruption to air travel meant that arbitragers could not reliably move metal between markets such as New York and London, and hence did not want to take the risk of putting on positions such as carry. And the result was that spreads such as the basis blew out (also the bid-ask spread in gold).

However, notice the rising trend from around mid-April this year. A rising lease rate is an indicator of rising scarcity. It costs significantly more to lease silver now than in the last several years. Indeed, it costs more now than at any time since the global financial crisis.

The lease rate, LIBOR – GOFO, is based on arbitrage in the commercial bullion markets, it has nothing to do with the rate Monetary Metals charges bullion dealers, jewelers, mints, recyclers, mints, and refiners. 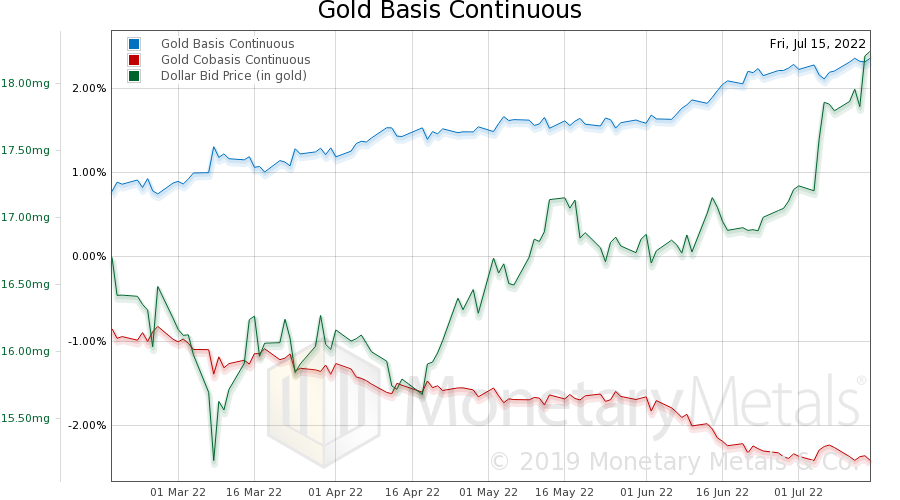 What does this mean?

There is a global dollar liquidity crisis going on. People are selling the other currencies hand over fist to raise dollar cash. Well, they are buying dollars too (in DollarSpeak, “they are selling gold”).

Why are they doing this? Did we mention that the crisis is global? Just ask those who held euros near $1.20 a year ago, and now the euro has been sold down to $1.00 so far! Everyone is facing margin calls, capital calls, loans are being called, etc.

Here is the chart for silver. 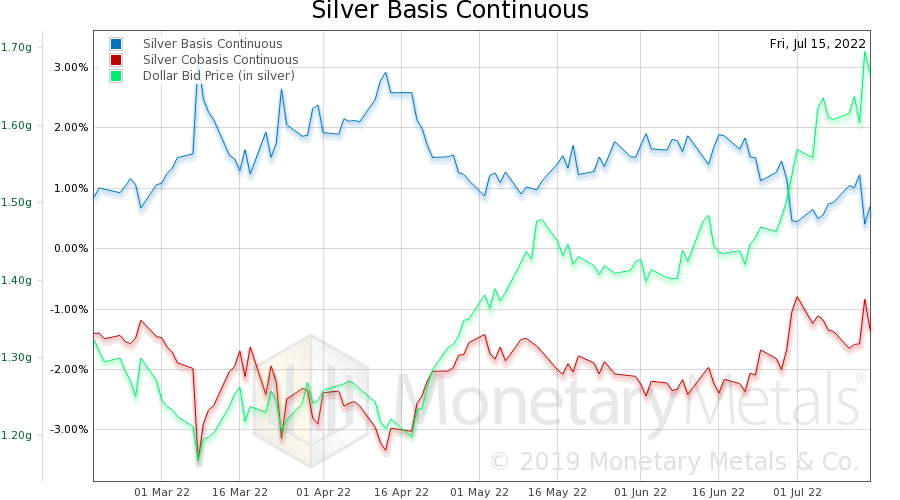 It does not look anything like the gold chart!

Now let’s look at the high-resolution intraday cobasis and price chart for gold this week. 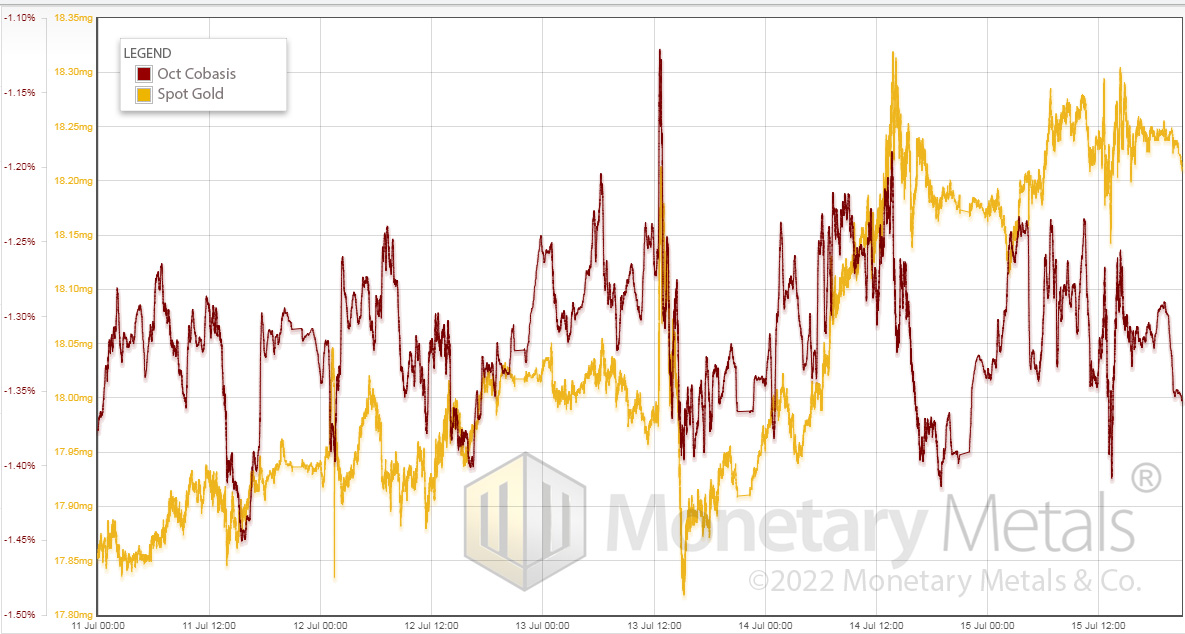 While the dollar rose from 17.85mg gold to 18.25mg, the cobasis chopped around and ended unchanged on the week. You can see that, at times, it correlated with the price. When cobasis moves with the price of the dollar, it means futures traders are positioning and repositioning themselves. No change in the fundamentals.

However shortly after noon (GMT) on Thursday, the two lines divorce. Cobasis heads down. At first, price of the dollar is heading down, but then it heads back up, while the cobasis temporarily recovers, then chops sideways, and finally ends back down on Friday.

We haven’t seen a chart like this in, well, we don’t recall how long.

While buyers of metal could get more aggressive in the future, the current market conditions are not looking bullish for gold.

By the way, we do expect them to get more aggressive. This market is characterized by intense selling by those desperate for liquidity and intense buying by those seeking to avoid the ravages of bad policies by governments and their central banks. Eventually, the latter will overpower the former. This was not that week (if we may butcher Aragorn’s classic line). 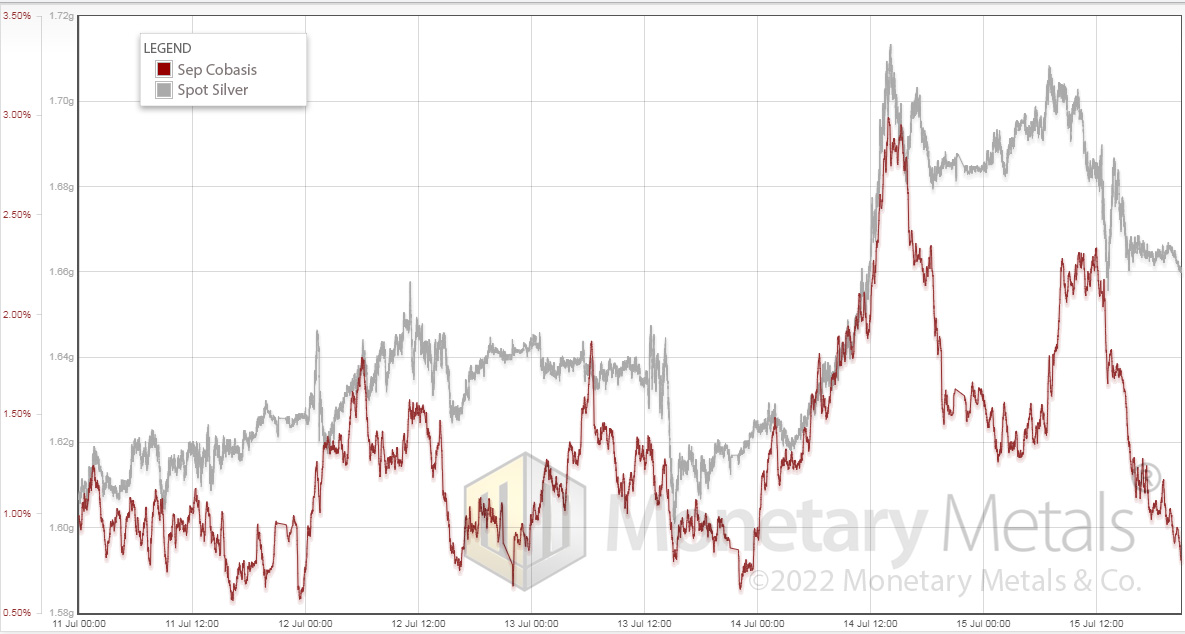 In silver this week, the cobasis more closely tracked the price of the dollar. This may be why, after noon on Thursday, the dollar begins to weaken in silver terms (“silver went up”, in DollarSpeak). However, the cautionary note is that the cobasis depleted all of its energy in that move. It dropped from 2.25% to 0.8%.

This means it was buyers of futures—speculators—who bought silver in the expectation that the price will rocket higher after the low on Thursday. Much of the backwardation in the September silver contract dissipated.