Editor’s Note: The following is an open letter to Elon Musk, in response to Tesla’s recent 10-k filing that stated in addition to buying bitcoin it also “… may invest a portion of such cash in certain alternative reserve assets including… gold bullion, gold exchange-traded funds and other assets as specified in the future.”

We hope you’ll help us get this urgent warning in front of him, starting with a letter he could be sent in the future if he buys paper gold… 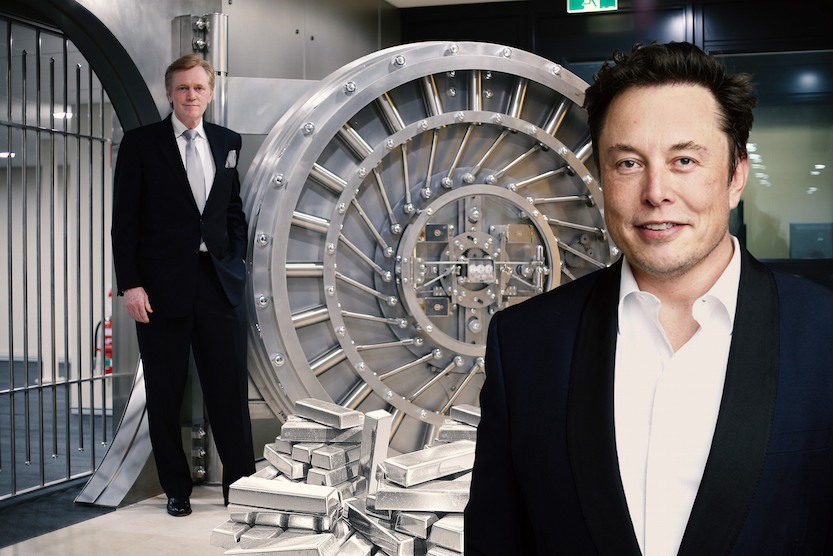 We regret to inform you that due to the counterparty risks of our bullion ETF, the fund’s NAV (Net Asset Value) does not currently match the spot price of gold.

We recently discovered that some of the gold bullion acquired by our sub-custodians is below the requirements as set forth in the Trust Agreement. As a result, the NAV of the Trust has sustained a loss, since the value of all shares are affected in events like this.

This means that if you sell shares of the ETF, the value of those shares will be below the spot price of gold on the exchanges.

This has unfortunately forced us to enact the clause in our prospectus that allows us to temporarily deny all requests for delivery of metal. We regret this action, but to preserve the integrity of the fund, this exception had to be activated.

As a friendly reminder, our prospectus limits the extent of legal recourse by shareholders against the Trust. This extends to a bankruptcy filing, which may or may not return your full investment to you and could take years to settle.

We apologize for any inconvenience.

Elon, this letter is not hyperbole…

Bullion ETFs have language that details these risks, and allows for these and other exemptions. Since a shareholder doesn’t own gold but instead just shares in a trust, ETFs introduce a slew of risks that aren’t present if one simply buys gold bullion.

During the market crash in March 2020, a fund of gold producers (GDX) did not track its NAV and sold for less than the value of the underlying assets. It was ultimately resolved, but it showcased the vulnerability that paper representations carry vs. real assets.

Here’s why we—as huge fans of your revolutionary ideas—urge you to consider buying real metal. It all centers around these two words…

Counterparty risk is simple: it means you rely upon another party to make good on your investment. If they fail, for any reason, your investment is in jeopardy. Even a simple savings account relies on the bank to be in a position to honor paying out your savings at any time and in any amount including your accrued interest.

Every bullion-backed ETF has counterparty risk. When you buy a gold fund, you rely upon many factors, probably more than you realize…

If any of these break down, your investment could be at risk. Delays for redemptions could easily take place. If we get a shift in the monetary system, it is entirely possible that one or more of these counterparty risks will materialize with bullion ETFs.

A lot has been written about the pitfalls of GLD (SPDR Gold Trust), the largest gold bullion fund in the market. But what many investors don’t know is that it carries enormous counterparty risk.

The following statements are all buried deep within the fund prospectus:

Does any of this sound like a sturdy investment? Hardly. In a push-come-to-shove environment, the risk is transferred to Tesla’s Treasury. The fund is set up to protect itself before the investor. Worse, in the event any of these events take place, the ETF may not even track the price of gold.

That’s not all. You may be surprised to learn that GLD hires "subcustodians" to store some of their gold. But that relationship has glaring loopholes and potentially fatal flaws. Check out some of these statements from the same prospectus:

This doesn’t sound legal, let alone smart. It clearly makes GLD an accident waiting to happen. This “chain of custody” is so poorly structured that it makes the fund highly vulnerable to all kinds of mishaps.

All it will take is for one supplier to knock over the first domino—“gee guys, we can’t get our hands on the gold we were holding in the fund,” for example—and the ripple effect could instantly cripple the fund and force management to freeze withdrawals. In that scenario, you would not be able to cash out your position.

And consider this: while the gold price would soar on this news, the price of the fund—and your investment—would plummet!

These are obvious flaws with GLD, but it’s not the only risk gold ETFs face…

If you think GLD carries a lot of risk, wait until you see this…

Blackrock, the sponsor of the world's second most popular gold ETF, IAU (iShares Gold Trust), admitted in 2016 that it had failed to register new shares with the SEC. Exchange-traded commodity funds are required to do this, but BlackRock reported there was an “administrative oversight” and they sold shares that didn’t yet exist.

Management claimed IAU shares continued to trade without interruption, but the reality is that management lost administrative control over the fund. They were fined by both the SEC and state securities agencies (in addition to possible lawsuits from shareholders).

At least the SEC was on the job—NOT! It turns out the “oversight” only came to light because the fund itself informed the SEC. In other words, regulators weren’t even aware of the violation!

All told, IAU sold $296 million worth of unregistered shares. The problem for investors was that until those shares were registered, the price of the fund did not track the price of gold.

Management blamed a spike in demand at the time, but that spike was certainly no more than what we’ve seen many times in the past. What happens when (not if) gold demand soars again? What if we get some sort of gold mania? And what does this say about how well equipped this management team is to handle these and other crisis-type events?

This blunder shows that management proficiency of this fund is lacking. All ETFs are subject to managerial skill—or lack thereof.

Most investors were completely unaware of this development. If a stampede for the exits had started, almost none would’ve got out intact.

The next counterparty risk may be the biggest of them all…

Risk #3: Storing Gold on the Titanic

HSBC is Britain’s biggest bank. It is also the custodian for GLD, which means it buys and stores gold for the fund.

Unbeknown to many GLD investors, HSBC has a history rife with scandals that include predatory lending, tax evasion, and even accusations that their lack of controls helped terrorist groups and drug traffickers. Their “rap sheet” is pretty long…

Does this sound like a bank you want to be the custodian of your gold ETF? One that has had billions of dollars in fines?

The answer is an obvious and resounding NO. And yet HSBC continues to be the cornerstone agency responsible for storing and supplying bullion for the GLD fund.

The thing is, most bullion ETFs store their gold at a bank. And that is the bigger problem for investors:

One reason to hold gold is to protect against the banking system—and most ETFs are part of that very system.

This link between bullion ETFs and the banking system puts your investment at risk during an economic or monetary crises. Bullion ETFs are vulnerable to all kinds of restrictions, emergency regulations, and even bank closures.

The #1 Reason to Hold PHYSICAL Gold

Elon, I’m sure you don’t want to experience delays selling your bullion ETF… or getting proceeds paid out… or to find out the fund doesn’t have the gold it thought it had… or to watch your fund fall while the gold price rises.

All these and more can impact the #1 reason you want to have physical gold:

That’s easily feasible with a fully allocated storage program, one that’s outside the banking system, fully insured and audited, guarded by guys with guns, all of which comes with the convenience and ease of electronic trading.

The primary reason to buy real gold instead of a paper product is because the nature of a crisis could demand one have physical metal, at least for a short time. You need more than just price exposure: you want gold in your control to get through a crisis.

Is YOUR Gold Investment a Safe Haven?

Bullion ETFs are a nice idea, but the risks are a very real and present danger. Worse, the reason you own gold is to protect against financial and economic uncertainty, and you could lose that advantage if you own a paper form of gold that comes with all kinds of counterparty risks.

Yes, holding physical gold isn’t risk-free, either. But, if you hold anything from fractional coins to 400-ounce gold bars, you hold a tangible asset that has virtually no counterparty risk.

Any type of crisis could put gold ETFs under greater and greater pressure, making them unable to offer safety from the very events they are supposed to protect us against.

Be the avantgarde person you are and buy real gold, and not a paper proxy, promise, or pawn. Your shareholders will thank you—so will your future self.

and not a paper proxy, promise, or pawn. Your shareholders will thank you—so will your future self.

And Lock in Your Silver Now!

Elon, as you know, the products your companies manufacture require silver—lots of it. Why not secure your future supply by buying it now?

Your risk is that the silver price spikes—something it is highly prone to doing—which means your costs could potentially skyrocket very abruptly.

And that’s just your automobile business. Not to mention your energy business, aeronautics business, etc.

Why not secure the supply you’ll need now, before it’s more expensive to purchase, and before other companies start gobbling up supply, too.

I urge you to take delivery of this vital metal that helps make your technologies as special as they are.